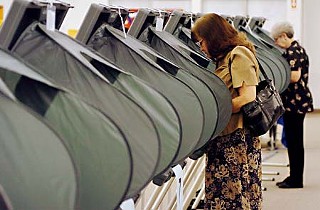 More than 58,000 ballots were cast in Travis County Monday and Tuesday, the first days of early voting. Early birds took advantage of two new "mega voting sites" – this one at 5501 Airport (the other is at 4534 West Gate Blvd.) – set up to ease overflow at the polls. Election officials expect as many as 80% of the county's 600,000-plus registered voters to cast ballots this election year. Early voting ends Oct. 31. (Photo by John Anderson)

• Criminal-History Box Banned Council agreed last week to remove from all city employment applications questions that relate to an applicant's criminal history – a move aimed at promoting public safety by reducing barriers to employment. In approving the resolution, Austin joins a growing national push to "ban the box," which has already been approved in several major cities, including Chicago and Boston. Travis County commissioners banned the box earlier this year. The city will continue to complete a criminal background check on any applicant for a security job or civil-service job – such as police officer – and for any job that involves work with children. – Jordan Smith

• Austin Boxer Faces 20 Years Former Golden Gloves pugilist Kurtiss Colvin was in court this week, on trial for manslaughter in connection with the beating death of 40-year-old David Morales on June 19, 2007. Morales was beaten to death outside the Booker T. Washington apartment complex after a car he was riding in accidentally struck a toddler while pulling out of the parking lot. The driver stopped, and the toddler was fine. But as word of the accident spread to passersby, the facts were skewed. Someone told the passengers of a nearby vehicle – including Colvin – that the driver, Morales' colleague Victor Medel, was trying to flee the scene. Colvin jumped out of the car and punched Medel, police said. When Morales tried to intervene, he was punched twice and killed. Reportedly, witnesses testified Monday that Colvin punched Morales once but that the fatal blow, which cracked Morales' head against the concrete, was actually delivered by another person, 16-year-old Samuel Byrd, who has already been tried in juvenile court, convicted of manslaughter, and sentenced to eight years probation. If convicted, Colvin could face up to 20 years in prison. – Jordan Smith

• New Driver's License Law Targets Immigrants The ACLU of Texas is joining state Rep. Ruth Jones McClendon, D-San Antonio, in calling for the Texas Department of Public Safety to eliminate a new driver licensing rule that forces immigrants to prove they're in the country legally before obtaining a state identification or license. "In my opinion, this rule represents a major policy decision and should not be initiated as a part of agency rule-making," McClendon wrote in a letter to Public Safety Commission Chairman Allan Polunsky. DPS spokeswoman Tela Mange told the Houston Chronicle that the new rule is part of an effort to "make sure the driver's licenses and identification cards were as secure documents as we could make them." The rule took effect Oct. 1. ACLU of Texas Executive Director Terri Burke argues that making it harder to get valid identification won't keep people from driving, which could lead to an increase in the number of uninsured drivers on the road and "cost Texas taxpayers an exorbitant amount of money." Burke also said she's worried that the policy may lead to racial profiling by the agency. "Because this new regulation links ... licenses with immigration status, people who look 'foreign' ... will be targeted for document verification." Lawmakers have previously considered, but have not enacted, ID-verification bills. – Jordan Smith

• Tolls Letting Roads Down? Travis County Commissioner Sarah Eckhardt, who also serves on the policy board of the Capital Area Metropolitan Planning Organization, has been raising hell about changes proposed to covenants governing the use of toll-road revenues – and CAMPO's apparent willingness to waive a required series of regional public meetings to vet the changes. In a recent blog post regarding CAMPO's supposed fresh commitment to public transparency, Eckhardt wrote: "[T]here was an understanding that citizen participation leads to better government decisions. That commitment apparently was lip service." (CAMPO Chair Kirk Watson, from whose lips the term "transparency" most often falls, recused himself on the matter due to a law-firm conflict of interest.) The changes would allow excess revenues from Highway 183A to "backstop" the debt financing of Highway 290 East; such revenue transfers work against developing a comprehensive, regional transportation system – one that includes anything besides more toll roads. The total project cost for the 6.2-mile "Manor Express­way" toll road (now under construction) ballooned from $504 million to $623.5 million last month – that's more than $100 million a mile. (By contrast, the entire 28-mile proposed Elgin-Manor-Austin commuter rail line for the same corridor recently was estimated by Capital Metro at $150 million to $180 million.) Read Exkhardt's blog post at: www.saraheckhardt.com/blog. – Katherine Gregor

Simon Property Group Inc. has been taking a pummeling in Austin for accepting retail subsidies from the city. But in El Paso, the mall developer is leading the charge against exactly that kind of subsidy – because it will benefit Simon's competitors.

Simon came out against proposed multimillion-dollar subsidies from El Paso City Council and county commissioners to rival development group Hawkins Regency LLC, which plans to redevelop the Farah complex in East El Paso into the Fountains – an upmarket regional shopping destination like Austin's Domain, owned by Simon. But whereas Simon is in favor of incentives for Austin retail, in El Paso it opposes them and condemns the proposed site as "another big-box strip center." Having property-tax incentives, Simon said in a press release, "favors one shopping center over another," while sorting out increases in sales-tax revenue from new sales depends on "how do you define 'new'?"

Stop Domain Subsidies, the group behind Proposition 2 (which would end all retail incentives in Austin by charter amendment), leapt on Simon's contradictory position as proof of its dishonesty in dealing with the city. SDS says the firm has become an inadvertent advocate for SDS' arguments about Domain subsidies. "There's no transparency, no public scrutiny, less money for public services, and it messes with the free market," said SDS founder Brian Rodgers at an Oct. 20 press conference at City Hall Plaza. "Those are the exact same things that Simon Property Group is saying in El Paso."

Richard Viktorin, a former state economic development expert and SDS supporter, compared retail incentives (which SDS opposes) unfavorably to the job-creation benefits of manufacturing incentives (which it has no issue with) for the wider economy: "Samsung is in the three-to-four range, meaning one job there creates three or four out here," he said. "Retail is a zero-multiplier effect." He conceded that removing any retail component from future incentives for developers could create complications, and the city would have to "write economic development agreements and finesse the retail out." But when it came to the Domain subsidy itself, he added, some supporters saw it as "a social-equity issue. Why are we incentivizing upper-end retail that only a very few of our citizens will shop at?" – Richard Whittaker

Beware of White Male With Clipboard

If anyone tries to advise you on how to operate Travis County's eSlate voting machines, make dead certain that the person is in fact a county election worker. County Clerk Dana DeBeauvoir said that on Monday, the first day of early voting, a white male in his late 30s in business attire with a clipboard was spotted giving voters misleading information outside the polling place at 2025 W. Ben White.

The man was basically repeating misleading info from an e-mail that has been making the rounds. The e-mail wrongly tells people that if they press the "straight ticket" button for Democrats, they must then also go to Barack Obama's name and specifically check it again. (Don't do this! If you do, it will actually negate your vote for Obama.) When actual election workers confronted the man, he fled. "Looks like we had a polecat in the polling place," DeBeauvoir said. "Voters can really help with these kind of shenanigans; they can quickly call attention to this kind of misbehavior." DeBeauvoir reported the incident to law enforcement officials.