Tweet
print
write a letter
If you're one of those old-school types who always saves your vote for Election Day, Travis Co. Clerk Dana DeBeauvoir begs you: Toss aside tradition this year, and get to the polls early.

DeBeauvoir says that typically, about half of Travis County's voters wait until Election Day to cast their ballots, and of those, about half "have a bad habit – they wait until after 4pm." Given that the county now has 590,039 registered voters – of whom a "conservative estimate" of about 440,000 are expected to vote – that could obviously create quite the bottleneck in the voting booth leading up to the 7pm poll-closing time.

The expected increase of voters – up from 355,708 in the 2004 general election – "is wonderful," says DeBeauvoir. "It's like nothing you've ever seen. … There are lots of young voters, lots of new voters."

But she's worried that if some of those voters show up at the polls right after work on Election Day, they'll suffer long lines. Or worse, they might actually be discouraged by the crowds and decide not to vote at all.

In fact, she doesn't even want you to wait until the end of early voting – the last day is Oct. 31, aka Halloween, when parents and partyers all over the county will have other concerns besides casting a ballot.

To handle the crush, the county is making early voting even easier than in past elections – in addition to the usual 24 early-voting locations and dozens of mobile-voting sites around Travis, DeBeauvoir's department has created two "mega sites" which will have at least 35 voting booths each at the beginning of early voting and even more as machines are gradually pulled from the mobile sites. The two mega sites – one north at 5501 Airport (in the building that formerly housed the Chair King business) and the other south at 4534 West Gate Blvd. (West Tower Village #115) – will also have extended hours on the last three days, Oct. 29-31, staying open until 9pm.

For election news and blogs, early-voting info, endorsements, Hail to the Hustle, and more, see austinchronicle.com/election. 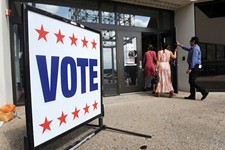 Did Y’all Even Vote?
Early voting totals are in, and they’re quite low 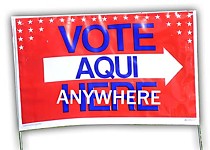 The World Is Your Precinct
Election day minus the hassle