Staking Out the Senate 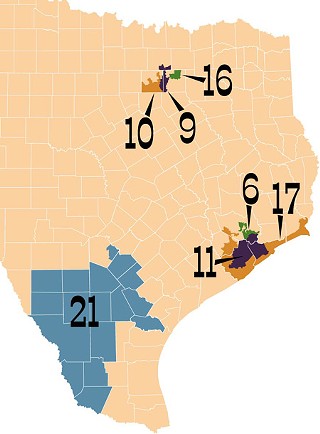 With no state Senate race on the Travis Co. ballot, it's hard for Austinites to get too excited about what's happening in races for the upper chamber. But while Democrats need five more seats to flip the House, a couple of Senate wins could have a huge impact on the next legislative session.

Last session, Republicans held the Senate 20-11, and this year, 16 seats are up for election. Democratic Senate Caucus leader Sen. Leticia Van de Putte argues that even a minor shift in the balance will boost the Dems' agenda. "It'll make my life easy as caucus chair for those moments when I needed all 11 on the floor all the time," she said. Compared to the more bitterly partisan House, she argues, it's easier for moderate Republican senators to break party ranks. "They would know the pendulum is swinging," she said. "Members see how their districts are changing, and they would think about families who are concerned about education and health affordability."

None of the six incumbent Democrats on the 2008 ballot faces significant opposition. But of the nine Republican incumbents up for re-election, four face Democrat challengers, and one Republican-vacated seat is up for grabs. It's not impossible for Dems to take the Sen­ate, but breaking the nine-seat GOP majority requires a clean sweep, and two Democrats face what could generously be described as uphill struggles. Rain Levy Minns, an attorney and community activist, faces the well-funded and entrenched Trans­portation & Homeland Security Committee Chair John Carona in Dallas' Senate District 16. And in SD 9, retired military veteran Melvin "Bloody" Willms is challenging Sen. Chris Harris, the ranking Senate Republican, with no money. But three seats are in the Democrats' sights:


Six Democrats plus nine Republicans equals 15 incumbents on the statewide ballot: Race No. 16 is a bonus, a special election that Democrats hope to see break their way. Harris County's Sen. Kyle Janek only made it two years into his second term before resigning in May. Now four Repub­lic­ans and two Dems want to replace him, including Democrat Chris Bell. Because it's a special election, it tops the ballot – ahead even of the presidential race. In Austin, Bell may still be best remembered as the 2006 gubernatorial candidate who didn't get Gov. Rick Perry out of office. But his campaign is hoping that the district remembers him as the Houston City Coun­cil member who made his reputation in campaign finance and ethics reform. He parlayed that into a victorious 2002 U.S. congression­al run and brought a successful ethics complaint against Tom DeLay. Bell campaign consultant Jason Stanford shakes off his candidate's failed run against Perry, muddied as the field was by the populist independent campaigns of Kinky Friedman and Carole Keeton Stray­horn. "There was a pervasive confusion about that race, but the issue was simple: If Dem­o­crats had voted for the Dem­o­crat, Chris Bell would be the governor," he argued.

Stafford suggests the crowded field this time around benefits Bell, since the huge district makes it challenging for his opponents to distinguish themselves from the pack. "Kyle Janek had 50 percent name recognition among likely voters," said Stafford, "but Chris Bell has better recognition than [U.S. Sen.] John Cornyn in the district." This, Stafford argues, makes him the incumbent-in-waiting. "His opponents can't open their mouths without talking about [him]," he added. It doesn't hurt that, with $457,749 in his war chest as of Oct. 6, Bell has more cash on hand than all five opponents combined.


Next door in SD 11, former Galveston Council Member Joe Jaworski suspended his campaign against GOP incumbent Mike Jackson after Hurricane Ike: not out of political expediency, but because his Galves­ton home was flooded out. "You could call this a Senate District 11 hurricane," he said ruefully about Ike's track. "No one was interested in hearing stump speeches, and no one had TV, so it was appropriate to concentrate on relief efforts, both for other people and for yourself." With his campaign staff safely relocated to Houston, Jaworski helped relief efforts on the island. "After eight days of cleaning my house," he explained, "someone tapped me on the shoulder and said, 'By the way, you've got a campaign to run.'" While many Democrats worry Galveston's evacuation would devastate voter registration and "get out the vote" efforts, Jaworski argues that Ike has changed voter priorities. Prior to landfall, he recalls, voters asked him about transport, pollution from oil refineries, and education. Now there's one issue: storm insurance. "What was a talking point ... has resonated across the district," he said. Accusing the insurance companies of using a playbook called "1,000 Ways to Say No," Jaworski argues that coverage "used to be black and white. You paid your premium, and you were in, and you didn't, and you were out. Now it's all scales of gray."

While no one can be blamed for the hurricane, Jaworksi blames incumbent Mike Jackson for failures in coverage. Last legislative session, Jackson threatened to filibuster House-backed reforms to the Texas Windstorm Insurance Assoc­i­a­tion (the state's insurer of last resort for storm damage). Jaworski holds him responsible for leaving the pot incapable of paying all claims. He's put correcting that, as well as protecting the vital University of Texas Medical Branch facility in Galveston, at the top of his legislative priorities. Fearing a repeat of the insufficient support for areas hit by Hurricane Rita in 2005, he said: "It's three years later. We can't let it happen to Galveston, and we never should have let it happen to East Texas."

Jackson has also made some heavily criticized tactical decisions, such as snubbing an Oct. 7 meeting with UTMB staff and skipping the Oct. 8 recording of a televised debate with Jaworski on the Houston PBS show Red, White and Blue. According to show staff, Jackson confirmed 30 days prior to recording that he would be attending. On the day, his staff announced he was busy campaigning in Freeport. An empty seat was left on stage, and co-host Gary Polland (an establishment conservative with deep connections that stretch right to the president) made it clear this was not an excused absence.


The third must-win seat for Democrats is also targeted by a former City Council member: former Fort Worth Council Member Wendy Davis challenging 20-year incumbent Kim Brimer, famous for wielding a fat cigar like a pointer in committee. At first, her council position was used against her, as Brimer's supporters and then Brimer himself filed lawsuit after lawsuit to get Davis off the ballot, claiming that she hadn't quit the council in time to file for Senate. Now that the 5th District Court of Appeals has ruled that it's too late to remove her, Davis sees her council experience as all positives when voters concentrate on pocketbook issues. "There's no better training ground for representing people than starting at a local level," she said. "You're experiencing day to day what their concerns are, and you learn how to communicate and transfer those concerns into your representation." 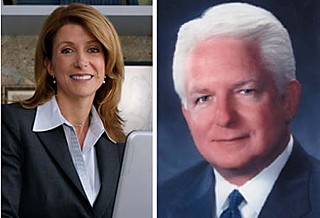 While she doesn't see a Democratic groundswell in her district, she does see sweeping discontentment with Republican hegemony. With education, transportation, and insurance this year's hot-button issues, Davis argues, Brimer faces the incumbent's challenge. "All of these things are broken, and my opponent has had 20 years to fix it," she said.

Even if only one or two of the three take their seats, Van de Putte expects a sea change in the Senate. Certain issues will face steeper challenges ("When you think about the passage of the margin tax, it passed 16-15. How many more of those other close votes will there be with a couple more Democrats in the Senate?" she mused), and some will be off the table (she predicts a quick death for school-voucher legislation). Even a marginal increase in seats will give Democrats a bigger presence off the floor in the all-important Finance Committee and the Sunset Advisory Commission. She concluded, "It will increase our breathing room and increase our skill set to become real leaders for not just the Democrats but for the Senate." 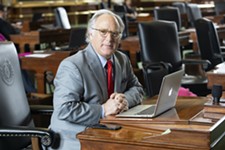 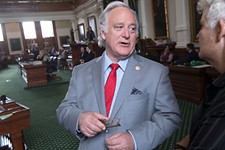