Four months after the historic Gertrude Jones House was bulldozed along with some nice shade trees, neighbors are questioning the wisdom of the city rushing to approve the demolition of the home (over the opposition of the Hyde Park Neighborhood Association), when all that's left is a vacant eyesore on this leafy Avenue F street. Emrobrai Homes had initially planned to build a new home on spec, but with home sales down 20% over last year, the homebuilder decided to first nail down a buyer before turning dirt. Sale price: $799,000. (Photo by John Anderson)

If you're interested in the design of the new central library, you'll soon have the chance to see presentations by the three finalist teams vying for the job of architect when they present to City Council on Thursday, Oct. 23, at 2pm. (Names of the finalists will be announced Oct. 17.) Follow­ing at about 6pm, the Library Commission and Austin Public Library Foundation will host a meet-and-greet social with the design teams in the City Hall atrium; comment forms and laptops for online comments will be provided. Council expects to make a final selection in two weeks. The library will include numerous community spaces of special interest. In selecting finalists, city staff gave extra weight to the architects' skill with community involvement and communication – even amending the selection criteria to more heavily weigh the teams' experience with Austin issues. Next March and April, a series of community forums will provide opportunities for design input. Active design work will begin May 2009; construction is expected to start in late 2011, with a grand opening in 2014. For more info, to see the finalist presentations (after Oct. 23), or to submit comments to council, visit www.cityofaustin.org/library/newcentlib.htm. – Katherine Gregor The fabulous cars of the future will be on display this weekend at the Austin Energy AltCar Expo & Conference, a free event this Friday and Saturday, 10am-5pm, at the Palmer Events Center. Attractions include a hands-on ride-and-drive area and the region's largest presentation of alternative-fuel vehicles and innovative transportation options. Friday's events feature technology and policy discussions and in-depth talks about topics such as climate change and the auto industry, battery technology, and the vehicle-to-grid (aka, V2G) technology that will enable plug-in hybrid vehicles and potentially decrease gasoline demand by an estimated 71%. On Saturday, guests can hear a no-holds-barred debate held among experts representing electric vehicles, hybrids, plug-ins, natural gas, propane, ethanol, biodiesel, and hydrogen. Also that day, national luminaries will talk about sustainable public transit and cleaner, greener ways to reduce vehicle miles traveled. Saturday also features film screenings, including shorts on Portland, Ore.'s multimodal transit success and Paris' ambitious Vélib' public bike rental program. Reservations are required for Friday's conference. For a full schedule, see www.austinenergyaltcar.com. – Daniel Mottola

On Oct. 17 at Austin City Hall, the Central Texas Animal Alliance, FixAustin.org, and Austin Siamese Rescue will sponsor a Road to No Kill Austin forum featuring Nathan Winograd, founder of the No Kill Advocacy Center in Oakland, Calif. Winograd is a national figure in no-kill sheltering and runs a consulting business that implements his "No Kill Solution" in individual animal shelters. He has made a name for himself for marshaling shelter "regime" changes for a fee, at times involving the toppling of shelter officials and mass firings. When last in town, Winograd condemned Karen Medicus of Austin's Mission: Orange in a report slamming the relocation of Town Lake Animal Center; he referred to her emphasis on the collaboration model as "ignorant." (See "Does Austin Need Fixing? Ask Reno." Aug. 8, for more.) – Patricia J. Ruland

New Faces at KVUE and KXAN

Two of the local TV news operations have hired new lead anchors. KVUE-TV, the local ABC affiliate, is replacing Christine Haas, the blond anchor babe from Minnesota, with Terri Gruca, a blond anchor babe from Minnesota. Gruca is currently at WCCO-TV in Minneapolis, where she's the consumer reporter, in addition to her news-reading chores. Before Minnesota, she clawed her way up through the minor leagues of TV news, with stops in Spartan­burg, S.C.; Knoxville, Tenn.; and Raleigh, N.C. Meanwhile, NBC affiliate KXAN has hired a familiar face, Leslie Rhode, formerly Leslie Cook, to replace the recently departed Michelle Valles. Rhode spent six years at KXAN before jetting off in 2003 to Washington, D.C., where her husband took a job with the Bush administration. Rhode will team with Robert Hadlock, beginning Oct. 27, just in time for the November sweeps; Gruca won't start at KVUE until Dec. 8. – Kevin Brass 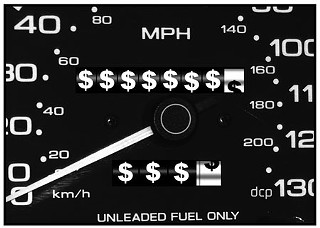 If everyone shifts from gas-guzzling vehicles to more efficient cars, tax revenues that fund roadway maintenance and construction could take a huge hit – that's why Austin is part of a new federally funded road-user study about shifting from the gas tax to a per-mile charge. The project, which involves installing a computer into private vehicles, proposes to find out if the metering equipment is "reliable, secure, flexible, user-friendly and cost-effective [and] to find out why vehicle operators accept or reject the system." The city is one of six field-test sites selected for this University of Iowa research study (along with San Diego, Baltimore, Boise, Eastern Iowa, and the North Carolina Research Triangle). Volunteers willing to take part for eight months in this two-year pilot project can apply online at www.roaduserstudy.org. – Richard Whittaker

Mayor Will Wynn did his best zombie impression last week to show how quickly anyone can learn the Michael Jackson “Thriller” dance (Wynn learned the “hip-roar turn” all by himself in less than 45 minutes!) – but why, you ask? Because Austinites will have two chances this month to break the Guinness World Record for most people performing the dance all in one place at the same time (not to be confused with the other “Thriller” record-to-beat: most people zombie-dancing all over the world at the same time). Austin gets one chance to break both records (Saturday, Oct. 25, at the Long Center) and a second chance to break the first (Saturday, Nov. 1, Downtown – Day of the Dead, of course). Event organizers hope to attract 1,000 participants, as L.A. is rumored to have at least 500 lined up for the competition. Clearly, it’s Austin’s civic duty to dance. For rehearsal times, M.J. sing-along info, and more, see www.thrilltheworldaustin.com. – Nora Ankrum