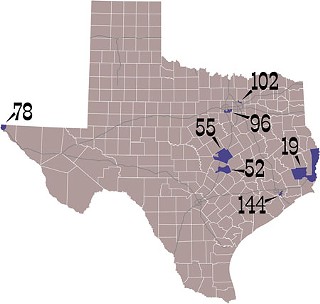 While Democrats would like a clean sweep this November (as would the Republicans), seven key seats around the state have emerged as battlegrounds for the fight to take back the House. Four of the seven are currently vacant. Democrats hope that even some seemingly secure Republican seats are more open than even 2006 election results would suggest.

Hamilton is running on his anti-tax track record, his ability to attract business investment, and his working relationship with Speaker Craddick, including picking up the chairmanship of the House Natural Resources Committee during the interim. But as legal counsel to several water and planning districts, former Vidor Mayor Hunter has his own planning credentials and is hammering at Hamilton on his anti-CHIP, anti-teacher-pay-raise votes.

Vacated by Mike Krusee, the seat is a bellwether for the changing demographics and politics of Williamson Co. "It's one of the last seats that the Republicans are holding in Central Texas," said state Democratic spokesman Hector Nieto.

Another empty seat, vacated by Dianne White Delisi, a fierce loyalist of Speaker Tom Craddick and Gov. Rick Perry. Temple-based restaurateur Sheffield backs small government and smaller class sizes, but Murphey's hoping for a bump from his current boss: District 17 Rep. Chet Edwards. As a 22-year Army veteran, retiring in 1989 with the rank of lieutenant colonel, Murphey became Edwards' district director and military and veterans liaison, which could help tip the district's big military vote. "People in the community are familiar with him, and he has good ties with people in Killeen and the Fort Hood area," adds Nieto.

Pat Haggerty, a popular moderate Republican in a heavily Democratic district, was forced out of the most westerly seat in the state by Margo after a bitter primary battle. But the new Republican nominee's electoral experience extends to a 59%-41% defeat when he failed to dislodge Sen. Eliot Shapleigh, D-El Paso, in 2006. El Paso prosecutor Moody comes with a powerful political lineage (son of popular District Judge Bill Moody) and a lifetime of campaign experience.

Another campaigning veteran and Chet Edwards alumnus, Turner was campaign manager for Edwards in his last four runs. Zedler's seat may be the definition of battleground, with a Texas Ethics Commission complaint hanging over his head. "Craddick has gone up there for fundraisers for Bill Zedler, and it's clear that he's an embattled incumbent," said Nieto.

With a background in education administration, it's no stretch for Kent to run strong on the Demo­crat­ic platform of better funding for public education. What was more surprising was that she yanked The Dallas Morning News endorsement away from 20-year incumbent Goolsby. He's refusing to hold a public debate with her and, Nieto alleged, "has been sticking to scare tactics and push polling."

Another vacant seat, after GOP incumbent Robert Talton resigned to make a failed primary run for Tom DeLay's old congressional seat. Redmond, a mort­gage agent and associate pastor at the First Baptist Church in Pasadena, balances a call for better schools with a law and order agenda, supplemented by calls for better drug programs and job training. His opponent is running on a "pro-life, pro-family, pro-business political philosophy" and is almost aberrant among this year's Republicans by touting his connection to the GOP hierarchy, having been appointed to the Texas Commission of Environmental Quality advisory board for small businesses by both Govs. George Bush and Rick Perry.