• Fennell Gets 10 Years Former Georgetown Police Sgt. Jimmy Fennell (pictured) on Sept. 26 was handed a 10-year sentence in the pen by District Court Judge Burt Carnes after pleading guilty to charges of kidnapping and improper sexual conduct with a person in custody. Fennell was accused of sexually assaulting a woman in October 2007, after he'd answered a call for police service at her home. Fennell was previously engaged to Stacey Stites, who was murdered in 1996. Another man, Rodney Reed, was convicted and sentenced to die for the crime, but Reed maintains his innocence, and his supporters suggest that Fennell was a far more likely suspect – Fennell was angry with Stites after finding out that she was having an affair with Reed, they argued, and the police never fully investigated Fennell as a possible suspect in the case. (For more, see "Who Killed Stacey Stites?" May 24, 2002.) – Jordan Smith

• AFD Under Fire On Tuesday, black community leaders convened a press conference at City Hall to denounce the Austin Fire Department for discriminatory hiring practices and to announce the filing of a lawsuit by Nona Allen, the only African-American female firefighter at AFD. Allen accuses the city of relegating her to a bare-bones locker room while the white, male firefighters enjoy relative luxuries such as couches, video games, and vending machines. Allen also said she's had to routinely remove 300-pound weights mysteriously placed on a desk and chair where she studies. AFD brass had excused the lapses as "miscommunication," according to Allen. Akwasi Evans, editor of East Austin's Nokoa newspaper, called for reinstating the "consent decree," which had mandated 20% of the cadet class be African-American and 20% Hispanic. The decree expired in 1982, causing a dearth of minority hiring that endures. "Something has to be done about that right now," Evans said – during current contract negotiations, preferably. Austin NAACP President Nelson Linder noted the irony that this "progressive city" has demonstrated a longtime "lack of enthusiasm" for ensuring equality at AFD. Though invited, city officials did not show at the press conference. – Patricia J. Ruland

• So Many Bongs, So Little Space How and where criminal-case evidence is stored was the topic of discussion Sept. 25 during the second meeting of the state's new Criminal Jus­tice Integrity Unit, created by Court of Criminal Appeals Judge Barbara Hervey as a way to get stakeholders together to discuss how to fix Texas' much maligned criminal justice system. On Thursday, members heard from cop-turned-consultant John Vasquez, president of the Texas Association of Property and Evidence Inventory Technicians, who called evidence storage the "redheaded stepchild" of most police departments. Departments around the state are plagued by problems in evidence storage, Vas­quez said, citing reports that money, drugs, guns (30 this year from the Houston PD alone), and other weapons have been stolen from facilities all over Texas. Departments need better training and controls on evidence to correct the problems, he said. Indeed, APD's administrator over evidence, Ed Harris, told the committee that figuring out where to put the stuff is a major headache (taking up the most space in APD's evidence storage is marijuana-growing equipment, he said). Evidence storage is, of course, no small matter – especially storage of DNA, which may be needed years after an initial arrest and conviction. – J.S.

• Keeping Austin's Energy Affordable When a house in Austin is sold, an energy audit and energy-use report to buyers may soon become mandatory, while actual improvements to the home's energy efficiency will remain voluntary. That's the nutshell version of the final Energy Efficiency Retrofit Task Force recommendations now making their way toward City Council. (For the full report, see www.coolaustin.org.) The report goes to the Electric Utility Commission Oct. 20, the Resource Management Commis­sion Oct. 21, then to council in November. Remaining in the report is a recommendation that divided the task force (largely due to pressure from the Austin Board of Realtors and other real-estate interests): It's for "mandatory back stop" provisions, which state that if voluntary program participation isn't sufficient, then minimal upgrades (made by the purchaser within one year) would become mandatory. For "Top Ten Reasons to Support the Energy Efficiency Program," visit www.affordableenergyforaustin.org. For ABOR's arguments against, visit www.keepaustinaffordable.org. "Affordable": the new omni-word that can mean anything? – Katherine Gregor

• Green Water Treatment Plant Update A slightly clearer picture of Project Green – the major Trammell Crow/Constructive Ventures redevelopment of the Green Water Treatment Plant site Downtown – emerged Sept. 24 at the first "Urban Workshop" of the Congress for New Urbanism's Central Texas chapter. Presenters Tim McCabe, for Trammell Crow, and Sue Edwards, for the city, said it will take about a year to craft their master development agreement. Only minimal design work will proceed before the deal is inked. The developer has promised Gold LEED certification for all buildings, community design charrettes for the public open spaces, affordable housing funds, and bike/pedestrian/transit/roadway improvements. McCabe said by February 2010, construction of underground parking should begin; building construction starts could take another 18 months or more. Asked if the city would invite community input in coming months, while the property is still city-owned, Edwards said the city couldn't require any more of the developer, given the extensive public-benefit requirements established by City Council. Still possible: a voluntary, developer-hosted community conversation, inviting Austin's best and brightest to suggest (nonbinding) ways to optimize the project's potential. Why not? – K.G. 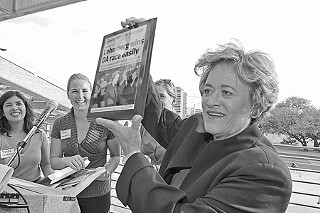 Rosemary Lehmberg, running unopposed to replace retiring veteran Travis Co. District Attorney Ronnie Earle, was honored last week during a reception at City Hall where she was lauded as a trailblazing woman. Indeed, when she takes office, Lehmberg will be the first woman to hold the county’s top law-enforcement job. Her achievements – she’s been with the D.A.’s office for more than 31 years – were acknowledged by local officials, including Mayor Will Wynn, who declared Sept. 24 to be Rosemary Lehmberg Day. – Jordan Smith

Good news! The city's already halfway through its public input process on the Boardwalk Trail at Lady Bird Lake. Went by like a flash, didn't it? The proposed trail would stretch from the Austin American-Statesman near Congress Avenue, under I-35, and past the apartments on Riverside and Lakeshore, to connect to Lakeshore park. The city's website (www.cityofaustin.org/boardwalk) says that "the city will be holding community-wide meetings during Septem­ber and October to ensure that Austinites have a voice in designing her vision." Unfortunately, the website wasn't launched until Sept. 25. That's the night we got a press release saying that what appears to be the first of only two public meetings was happening in five days, too late for us to have any notice about it in the paper. (It happened last night, Wednesday; hope you were there.) At this point, a week later, there are still no details about the plan on the one-page site except for a single .jpg map. Still, the city wants "to ensure that Austinites have a voice in the design process." So hurry down to the only other scheduled "community-wide meeting," Wednesday, Oct. 8, at the Parks and Recreation Department Board Room, 200 S. Lamar, 6-7:30pm. – Nick Barbaro

A triumphant Jake Stewart in D.C.

Jake Stewart was the only Texan among the 120 participants in last week's Brita Climate Ride, a 300-mile bike trip from New York City to Washington, D.C., meant to raise money and awareness for addressing climate change. Fittingly, Stewart manages the city of Austin's Climate Protection Program. "It was a great event full of energy that ended with all of the riders rolling into the capital, urging the U.S. Congress to adopt meaningful climate change legislation. Among other lawmakers, Congressman Lloyd Doggett was there to greet us and gave a barn-burning speech to the group," Stewart said. He recalled riding through Amish country and Valley Forge and camping out in George Washington's barracks. "It was a great recharge to gather with other committed folks from around the U.S. on this critical global issue," he said. News of last week's successful Regional Greenhouse Gas Initiative, the nation's first carbon cap-and-trade auction encompassing 10 Northeastern states, tells us that "just because the federal government isn't moving doesn't mean we have to wait," said Stewart. Citing 500 other cities that have taken climate action, he said, "I'm convinced that any real progress will come out of the local model." – Daniel Mottola

Does Houston really have the No. 2 rail transit ridership in the U.S., as City Council Member Brewster McCracken stated at a recent Rail 4 Real meeting? After several anti-rail readers wrote to complain about that claim, we checked: Per track mile, the answer is yes, at least according to Wikipedia: Boston has the nation's highest light rail ridership per mile at 9,550 per mile per day. Houston comes in second at 5,307 riders per mile per day. (Wikipedia's information for Houston is based on a daily ridership of 39,800 on a starter system of 7.5 miles; more recent ridership has approached 45,000.) Meanwhile, Metro Magazine ranks Houston's ridership at No. 1, based on riders per rail car. A Houston MetroRail spokesperson said the system had 11.7 million boardings in 2007 and 5,333 boardings per track mile on weekdays. The $324 million MetroRail starter line opened in 2004. In June, Houston started building a 30-mile light-rail expansion; the traffic-plagued city is actively planning a $3 billion commuter-rail system to serve five corridors. – Katherine Gregor