Tweet
print
write a letter
In at least one respect, the master-planned neighborhood at Mueller is a microcosm of the city of Austin's own larger struggle with keeping the affordability factor in the local housing stock.

Mueller's development team, like Austin's City Council, is attempting to figure out how to squeeze as much affordability – and range of prices – into a single community as possible. And, like Austin, Mueller is looking at ways to go denser and taller without disrupting surrounding homes. "One goal of Mueller has always been to be a mixed-income community," said Matt Whelan of Catellus, the group overseeing the redevelopment of the former city airport site, at a Sept. 18 update on the implementation plan. "We've seen a great demand for the housing in Mueller, so we decided to go back and look at our housing types to see if we can make the housing even more affordable, to provide what many might call the work-force housing."

Where single-family-home communities are typically eight to 12 units per acre, these new Mueller prototypes could be upward of 28 units per acre. The trick is to push up the density without losing the compatibility with existing local neighborhoods. Tentatively, the new housing types could add another 800 units to Mueller's planned 4,600 housing units in this Central East Austin community.

Theoretically, that's intended to push down Mueller's home prices, which right now run roughly $250,000 for condominiums and between $160,000 and $430,000 for homes. It's the belief of Mueller's redevelopment advisory committee that a wider range of housing stock could attract even more buyers; buyers are willing to exchange the large suburban lot for top-end amenities and a close-in drive.

Mueller is a community built on a plan. Certainly, it's no utopia. Like any community, it's facing some of the day-to-day realities of an Austin neighborhood. In the development's fairly new retail section, the Shoe Pavilion store has gone into foreclosure. There's been some hand-wringing over the crowds of day laborers expected to arrive in the parking lot of the new Home Depot when it opens at the end of October. And of course there's the rising cost of Austin housing, even as the housing industry goes into free fall.

Four years into the Mueller plan – and with 250 houses on the ground and occupied and another 150 under construction – Catellus and consultant ROMA have returned to the master blueprint once again to look at what needs to be tweaked, especially when it comes to housing stock prototypes.

The most obvious tweak would be ramping up the density in Mueller neighborhoods, especially the neighborhood east of the town center, which is intended to cater to the younger, hipper set and empty nesters. Row houses, yard houses, and the soon-to-be built six-plex Mueller houses along the esplanades could be joined by prototypes of other housing models, including what is being called a "tuck under" row house with a parking courtyard that can be used as open space.

Fortunately for planners, residents in the Mueller-area neighborhoods are some of the most receptive in the city when it comes to density in the name of affordability. "The tradition of Mueller is one of open-minded discussion," said longtime ROMA consultant Jim Adams. "People are not afraid of density. They just want to ensure the quality of the environment. We've heard some concerns about traffic, but whatever we do will take the existing traffic threshold into account." 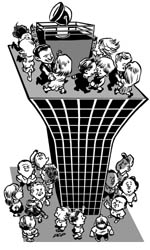