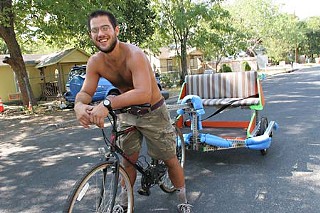 Projects in various stages of completion litter the back yard of Luke Iseman's East Austin home. A homemade, battery-operated welder, five 4-by-4 planters crowned with PVC pipe (to funnel gray water, someday), and indecipherable mounds of scraps surround the centerpiece of the yard, an enclosure housing two chickens. They're the lone survivors of a flock of more than 20, Iseman says, which suffered rapid attrition at the teeth of raccoons and other predators.

Iseman, shirtless and tanned, motions to a motorcycle leaning against the house: "It's electric," he says. "I built it myself."

"It worked for 40 seconds," teases Iseman's girlfriend and housemate, Amanda May. "We have it on tape."

"No, it worked for 10 minutes," Iseman retorts.

Iseman and May are über do-it-yourselfers. Their concept of DIY goes beyond tiling a bathroom or painting a bedroom. They aspire to make just about everything they need to live. For instance, they're working toward food independence. The planters, filled with a special mix of soil, are slated to grow all of the couple's fruits and vegetables. A new flock of chicks maturing in a back room of the house will supply eggs. And they intend to plant an "edible forest" behind their house.

They're also inventors. May says she holds the patent on a clear bra strap. (However, she says due to legal complications, she's not been able to profit much from her invention.) Iseman invented a bike-alarm stun gun. The device, when activated via cell phone, looses electric pulses through a stolen bike's handlebars to shock the bike nabber's hands.

And they've also launched DIY careers of sorts. May, an accountant, and Iseman, who worked in business development for a local dot-com, quit their day jobs months ago in favor of more independent work. May started the Purple Fig Clean­ing Company, which uses only natural products, and Iseman opted to pedal for an Austin pedicab company. Their goal is to work fewer hours so that they have time to invent and build things.

A couple of months ago, Iseman decided to strike out on his own as an independent pedicab driver. As an indy, he could rake in $400 or more per weekend without having to pay a fee to use a pedicab. Naturally, he planned on building his pedicab himself. To that end, Iseman consulted websites that provide patent-free design plans and instructions posted by other DIYers. (One such site, www.instructables.com, offers how-to help on items ranging from Halloween costumes and chocolate mousse to stereo speakers and solar panels.) That's how Iseman learned to build the welder and the electric motorcycle. But the sites lacked plans for a pedicab. Iseman was undaunted. He would simply design one from scratch.

Pedicabs seen on the streets of Austin are constructed, like bicycles, of welded tubes of steel or aluminum. Lacking welding skills (he's learning), Iseman chose another path. He bought scrap Telespar perforated galvanized steel tubing from a local road-construction company. (Telespar is used to erect stop signs.) He fashioned a frame from the tubing, bolted it together, suspended (with springs) a swath of Army-surplus canvas for a seat, hitched the frame to his bike, and called it a pedicab. The pedicab cost Iseman $300 to build, compared to $2,000 or more for a manufactured one.

Then he went to have it inspected. The city's Public Works' Transporta­tion Division's Ground Transportation Section inspects and approves all new pedicabs that operate on Austin's streets. Usually the inspection is a routine affair that takes just a few minutes. Enter Iseman and his homegrown contraption. Iseman's assigned inspector, Michael Bradburn, was not impressed. He failed Iseman's pedicab four times.

Steve Grassfield, transportation regulation manager, rattles off a list of violations found on Iseman's pedicab during the four inspections. The sharp edges of the steel tubing were exposed (Iseman later covered the edges with blue foam padding). There was no front or rear lighting. The bolts lacked locking washers or nuts. The required slow-moving vehicle sign was hung upside down. The seat was unsafe. During one riding inspection, Grassfield says, Iseman stopped quickly and Grassfield was thrown from the seat and onto the pavement.

Eventually, Iseman fixed all of those problems, but his tires became a sticking point – one that threatened to bring down the entire pedicab industry in Austin. Bradburn told Iseman that he needed bike tires that could bear 1,000 pounds. However, a weight requirement for tires is not listed on the pedicab inspection sheet provided by the city. In fact, the list doesn't mention tires at all. ("It doesn't say anything about flying off the seat, either," Grassfield responds. "You have to use a little common sense here.")

Iseman couldn't find a bike tire rated for 1,000 pounds, so instead, he called around town and found out what brand of tires are commonly used by pedicab services (Maxxis Hookworms, which are rated at 200 pounds) and bought a pair. Still, Iseman says, Bradburn insisted on the weight rating information. Meanwhile, Bradburn joined the Austin pedicab Yahoo group in search of information about tires. When word got out that the city might require 1,000-pound ratings on tires – which would require operators to buy a new set of tires for every pedicab in the city – the online community began berating Iseman (not Bradburn) for putting the entire industry at risk.

"It's all good and cool to be a rebel and all that, to let your freak flag fly and all, but you are quite likely putting the entire Austin industry at risk by trying to get that piece of sculpture passed as a legit people carrier," wrote Yahoo poster Billy O. "How many people are you willing to hurt in order to get the city to do it your way?"

A frustrated Iseman felt that Bradburn had insisted on the arbitrary weight rating and wouldn't pass his pedicab because the inspector was prejudiced against his homemade contraption. "He didn't like it just because it was DIY," Iseman says. "He thinks I'm some goofball guy he can scare away."

In Iseman's mind, the city should be supportive of his initiative. He reused materials, he's encouraging pollution-free transportation, and he's generally contributing to Austin's cherished, keep-it-weird culture. "Talk about the creative class!" Iseman says.

Grassfield, who fielded my call to Brad­burn, says that the inspectors were just doing their jobs – making sure the pedicab was street-legal and safe. "This is the first homemade pedicab we've had," Grassfield says. "We gave [Iseman] plenty of opportunity."

After input from anxious pedicabbers on the Yahoo group, Bradburn relented on the 1,000-pound requirement and deemed the Maxxis Hookworms suitable. "I received and researched enough info, and we have determined the pedicabbers can continue using the tires they have always been using," declared Bradburn in a Sept. 2 post.

On the fifth inspection, on Sept. 8, Grassfield passed Iseman's pedicab, unleashing the first (in recent memory, anyway) homemade, city-sanctioned pedicab onto the streets of Austin.

It's not pretty, but it works. 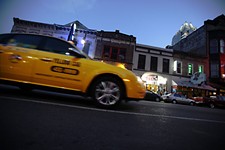