T. Boone Pickens, the 80-year-old billionaire oilman who's thrust himself into the spotlight lately by aggressively advertising his wind-and-natural-gas-powered "Pickens Plan" – meant to save us from the ills of foreign oil addiction – was joined on a national town hall phone call last week by an unlikely ally: Carl Pope, executive director of the Sierra Club. "Boone and the Sierra Club don't agree on everything," Pope said, but "we do believe that the elements of his plan are key to helping us end our oil dependence and move us toward a clean-energy economy."

"I can't think of anything more important than our energy decisions today," Pickens said. Those decisions "will determine Amer­ica's future prosperity, our political stability, and our quality of life." His plan would repurpose the domestically produced natural gas currently supplying 20% of the nation's electricity to fuel motor vehicles and in turn generate 20% of the nation's electricity from wind power. The U.S. Department of Ener­gy says the wind goal is achievable, but Pickens wants it done in 10 years – half the time the DOE estimates. Pope agreed that what's needed more than anything else is a modernized national electricity grid along with new vehicles designed to burn less-polluting natural gas, beginning with government purchases and new 18-wheelers.

Doubts were raised over the potential pace of wind-farm construction and if windmills (which produce steady power only about 30% of the time) can be counted on to power 20% of the country. Critics also question where the estimated $1 trillion in private investment might come from to bring that much wind power online, not to mention the approximately $200 billion needed to modernize the grid.

But for his part, Pickens isn't just flapping his gums – he's investing $12 billion in the nation's largest wind farm, near Pampa, Tex­as. He has also heavily bought in to natural gas, a fossil resource that's actually becoming more abundant domestically, thanks in part to new drilling that's taking place literally in the back yards of Dallas-Fort Worth residents. Setting aside romantic reflections like, "This is my last opportunity to make a contribution," Pick­ens also stands to profit from the plan. (Among his other notable million-dollar investments was a $3 million contribution to Swift Boat Veterans for Truth, the John Ker­ry smear group that helped facilitate four more years of Bush's retrograde energy policy.)

The crux of Pickens' argument is that we're spending $700 billion per year on imported oil – some 70% of our consumption – a huge security problem. That oil dependence, Pope added, is also messing up our environment and exacerbating climate change. Pope and Pickens agree that recent fevered arguments to "drill, baby, drill" are a distraction from what the real energy discussion ought to be (though Pickens favors drilling everywhere, while Pope prefers dumping the drill for renewables). They also concur that the Pick­ens plan isn't the ultimate solution to our energy problem but rather a "20-year bridge" to better, cleaner, and more sustainable energy technologies. Decide for yourself at www.pickensplan.com and www.sierraclub.org/energy. 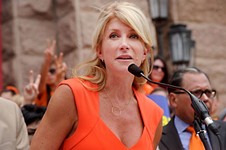