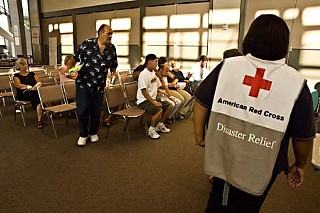 By Monday afternoon, the number of Hurricane Ike evacuees staying at the Convention Center was winnowed to 360. See "Another Ill Wind." (Photo by Sandy Carson)

• THE FUTURE OF EAST RIVERSIDE About 60 Austinites participated in a "public visioning" workshop on Sept. 17 to express ideas, concerns, and preferences for future redevelopment of the East Riverside Corridor. The Eastside corridor – a 3.5-mile stretch between I-35 and Highway 71/Ben White Boulevard – now houses about 200 businesses and 43,000 residents. But the humble corridor could see far more dense and upscale redevelopment soon, particularly if it gains rail transit. Anyone who missed the workshop is encouraged to visit www.eastriversidecorridor.com by Oct. 1 and take an online survey to "evaluate and respond to images of East River­side Drive as it exists today and how it might look in the future." After further analysis and recommendations by consultant A. Nelessen Assoc­iates, plus some more public meetings, City Council will adopt a master plan for the corridor. The effort is being coordinated with concurrent planning for a proposed streetcar/light rail transit line to serve Riverside destinations between Downtown and the airport. – Katherine Gregor

• NEW PARD DIRECTOR City Manager Marc Ott says he chose Sara Hensley to be Austin's new Parks & Recreation Department director because "she understands Austin's love of the outdoors, its stewardship of the environment, and the goal of Austin becoming the fittest city in the country." Currently the director of Parks and Recreation in Phoenix, Hensley starts her Austin job Dec. 1 with a $163,000 salary. Hensley said she will lead increased neighborhood-level communication and explore private-public partnerships like Phoenix's successful effort to get developers to help pay for upgrading urban parks that benefit their projects. In Phoenix she managed about 1,100 employees on an annual budget of $110 million; Austin's PARD has about 570 employees and an annual budget of $55.3 million. A 25-year parks professional, Hensley also has led city parks departments in California, Virginia, and Illinois, but she began her career with Austin's PARD from 1985 to 1989. "In a way this is coming back home – it's a personal and professional move for me," said Hensley, who visits parks regularly with her 3-year-old twin sons. Promising to "tell the truth" and be a "cheerleader and champion" for open space, she said, "I don't blame the citizens a bit for demanding that." – Katherine Gregor

• 'SECOND CHANCE' FOR IMMIGRANTS Last Thursday, national immigration leaders held a telephone conference to advocate passage of the Child Citizen Protection Act (House Resolution 1176), which would restore a judge's prerogative to prevent deportation of an immigrant parent of a U.S.-born child. The act has been pending in Congress since February 2007. Conference organizer Manisha Vaze, of Families for Freedom, released a statement saying the bill "would give immigration judges more power to weigh the best interests of U.S. citizen children. But bills like this may also give immigrants ... a second chance to help influence communities for the better." Panelists included deportees and children of deportees who, as beneficiaries of "second chances" granted by judges, have dedicated themselves in turn to benefiting their communities. Several panelists told of the torture, persecution, and homelessness suffered by deportee families in home countries. When asked what happens to children left behind in the U.S., Texas organizer Valentina Guerrero said: "When my mother was deported, I had to assume my mother's role [for] her four children. For me to see my mother in Mexico stripped of her rights as a mother is hard." – Patricia J. Ruland

• TEXAS DROPS MORE FLDS CUSTODY CASES It's sort of hard to believe that Child Protective Services' spring raid at the West Texas compound of the Fundamentalist Church of Jesus Christ of Latter-day Saints was absolutely necessary to protect the children, as state officials averred, when in the intervening months the child welfare agency has unceremoniously dumped cases involving more than half of the children originally taken into custody. In April, CPS investigators joined the Texas Department of Public Safety and Schleicher County sheriff's officers in a raid at the ranch, home to hundreds of members of the Mor­mon breakaway sect, claiming they had been tipped to abuse going on inside the ranch. That "tip" turned out to be a false report, but not before the state removed more than 400 children from the property, claiming they were in immediate danger. On Sept. 16, CPS filed a "nonsuit" on four more FLDS children originally taken from their homes, bringing the total number of cases dropped by the state to 291, according to Salt Lake City's Deseret News. So far, only one child has been removed to foster care after a judge ruled that her mother was unable to "protect her from abuse," the daily reports. – Jordan Smith

Nearly 40 members of local unions and community groups crammed into KB Home's headquarters last Thursday to deliver a letter in support of seven workers who are owed nearly $7,000 for work they did on KB Home properties last April. "We are asking that KB Home ensure that the workers who build their homes are paid in accordance with all labor laws," said Emily Timm of the Workers Defense Project. Though the group has been in talks with KB Home for months now, the workers are still waiting to get paid. – Diana Welch A park in a parking space: Why not? Shown here is the handiwork of Save Our Springs Alliance, one of eight Austin installations created last weekend for the 2008 National Park(ing) Day on Sept. 19. The Trust for Public Land event – celebrated in more than 80 U.S. cities (co-sponsored here by Austin Green Art) – transformed parking spaces into eye-catching temporary parks for a day, to champion the value of urban green space. – Katherine Gregor

Power to the (Homeowning) People

While Wash­ing­ton tries to fix the mortgage market, the Texas Legislature's Sunset Advisory Commission is under pressure to replace the state agency that regulates new home building with something that, well, works. The Texas Residential Construction Com­mis­sion, which is supposed to protect homeowners from unscrupulous builders, has come under near-universal criticism for powerlessness before the construction industry and for preventing residents from suing builders when their homes collapse. In its report, submitted to legislators this week, Sunset Commis­sion staff condemned the agency for having "a potentially devastating effect on consumers' ability to seek their own remedies" and called for its closure by mid-2010. On Sept. 22, at a press conference with the newly founded Homeowners of Texas pressure group, Democratic House District 52 candidate Diana Maldonado called for a housing "Lemon Law," similar to the one protecting drivers from unscrupulous car dealers. The commission is expected to make final recommendations in mid-December, to be presented to the Legislature next session. – Richard Whittaker

Anne Dunkelberg, one of the state's leading health-care policy wonks and champion of low-income Texans, has received a Distinguished Public Service Award from the alumni association of the LBJ School of Public Affairs. Dunkelberg is associate director of the Center for Public Policy Priorities and a familiar face at the state Capitol, where she lobbies and cajoles legislators to make health care more accessible to those in need.