The Sad Case of the Cactus Planter 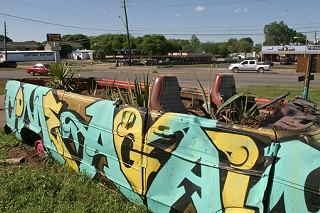 Ralph the Cactus Planter, the converted, dismantled, and decorated Oldsmobile 88 in front of the Planet K store on I-35 in San Marcos, has lost the latest stage of his legal battle to be recognized as legitimate art – but his owners are considering an appeal.

Last November, the city of San Marcos cited the former vehicle for violating the city's junked-car ordinance and ordered that it be moved (see "Cactus Planter on Trial," Aug. 8). Planet K CEO Michael Kleinman argued that Ralph is an artistic comment on car culture and wars for oil and therefore constitutionally protected speech. U.S. District Judge Sam Sparks decided it was both.

In his Aug. 22 decision, Sparks ruled that because it's not just a work of art but also a planter and a "distinctive symbol of the Plan­et K business," getting Kleinman to either move Ralph or put some kind of screen around it so that it's not visible from the road would not be unconstitutional. Sparks also echoed the city's concern that it's "an attractive nuisance" – which was not meant as a compliment: The planter could encourage children to play on other, more dangerous junked cars, he said. Sparks gave Planet K 30 days to come into compliance with the code, and that period expires this week.

Kleinman's attorney, Pete Kennedy (who is also the Chronicle's attorney), said his client is considering an appeal, in which case Kleinman would put up a bond to cover the cost of relocating Ralph. "That way the city would be sure it would not be footing the bill," Kennedy said.

Another of Kleinman's art-car installations, this one within the jurisdiction of the city of Austin at Planet K's Stassney site, is also under a junked-car citation. Kennedy said that even if the city does decide to press forward, Sparks' recent ruling on Ralph might have no bearing on his Austin cousin, "because this is not a junked vehicle under the Austin ordinance."