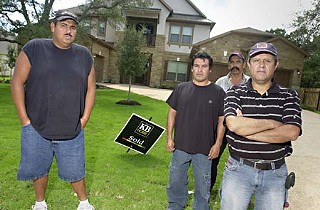 These men didn't receive what they were owed after working on a KB Home project: (l-r) Oscar Quezada, Manuel Santiago, Leonardo Pineda (in back), and Ramiro Mora. (Photo by John Anderson)

Last April, seven construction workers were hired to work on several homes owned by housing giant KB Home. They did the work, but four months later, they're still waiting to get paid. No one disputes the fact that the men did their jobs; the only problem is nobody wants to be the one who actually pays up. According to the Workers Defense Project/Proyecto Defensa Laboral, KB Home hired subcontractor Bob Palladini, who hired another subcontractor, Ken Westlake, who hired another subcontractor, Juan Ramirez, who hired the seven men who are still waiting to get paid.

"Ken said that KB Home hadn't paid him, so there wasn't any money for us," explains crew leader Oscar Quezada, and Westlake agrees. "These guys want their money, and I don't blame them for that," he told the Chronicle on the phone from another job site. "But KB Home fired me because the work this crew did was so shoddy. Now, I have all these back charges that I owe KB Home, since they had to hire someone else to clean up the mess, and now they are withholding my pay." Westlake has offered to pay the workers half of the amount they are owed, which he feels is more than reasonable. "In a moral sense, I don't owe these guys anything," Westlake claims. "I mean, they still have some of my equipment – and, I got a letter in May from the IRS that says that Juan Ramirez gave me false papers, so on top of everything else, I'll have to withhold 28 percent because these guys are illegal."

"I'm not sure Ken can really speak with authority on the immigration status of all of the workers," says Emily Timm of the Workers Defense Project. Regardless, she says, "Labor laws protect all workers, so documentation is irrelevant." The Project is working with Quezada and five of his fellow crew members to recover the entire $6,685 they are owed. "These guys did the work; nobody is contesting that fact," says Timm. "Wage abuse is wage abuse, no matter the documentation status of the worker."

For their part, KB Home says that it has little to do with the dispute. "KB Home has paid for the work that has been done. In fact, we take great pride in ... paying our subcontractor partners in a fair and timely manner, as we have done in this case," they said in a written statement. "Not only do we expect our subcontractors to do the same with their own employees, we insist on it as part of a third-party certification requirement through the NAHB's National Housing Quality subcontractor program." The statement went on to say, "We are doing all we can to ensure that this matter is resolved quickly and judiciously between those two parties." But, when pressed on the phone, KB Home representative Heather Reeves was unable to say exactly what kind of pressure they are applying to the parties involved.

The Workers Defense Project is more specific when it comes to the outlined tactics they are employing; they plan on using both legal aid and direct action in their effort to recover the men's back wages. Timm says they're planning an action at KB Home's office here in town, and in the meantime, the Workers Defense Project has helped the workers take out a lien against three of the properties in dispute. But only three of the workers were able to participate in the claim; the remaining four have left the state to find work. One of those is Marcelino Rosas, whose wife, Ericka, attends weekly project meetings with her two young children in Marcelino's absence. "After my husband didn't get paid for that job, we needed money desperately, so he had to take a job in Nebraska to support our family," Ericka said in a press release from the Workers Defense Project. "Now it's been months since we've seen him."

This dispute is not an isolated incident. In the past two years that the Workers Defense Project has held open meetings to hear cases of wage abuse, Timm says that not one week has gone by without new claims filed. Right before she updated Quezada and the others on their case at last week's meeting, Timm spoke with a subcontractor who was owed nearly $10,000 for tiling and concrete work done in several Subway restaurants in the Central Texas area. The Project had already managed to recover $4,500 for him and was now helping him navigate through small claims court.

"Austin is developing at a rapid rate," says Timm. "But we have to ensure that we aren't doing it at the expense of people actually doing the building." As for who she thinks should pay up in Quezada et al.'s case, Timm is clear: "Our position is: KB Home is going to sell these homes for hundreds of thousands of dollars. They need to step up and take responsibility for this."