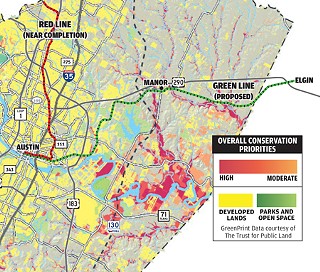 Green for Sustainability: If commuters could ditch their cars and take the Green Line instead, the region could enjoy numerous environmental benefits. This map's overlay of regional rail onto "The Travis County Greenprint" map also highlights the issue of land conservation. Capital Metro's vision is for dense transit-oriented development within a half-mile of the Green Line, concentrating new residents around six outlying rail stations. If carefully implemented – with proactive conservation measures – this growth pattern could help protect surrounding rural, historic, agricultural, and environmentally sensitive lands, much of it currently undeveloped pasture or open land. The river and creek shorelines (shown in red here) merit particular attention. Shown is the Greenprint's ranking of individual tracts by "overall conservation priorities," a blend of four priorities.

Is passenger rail for the East Austin growth corridor a wise regional transportation investment? For the first time, the just-released Capital Metro report "Austin-Manor-Elgin Corridor: A Preliminary Review" provides the hard data – or at least good estimates – to make that call. In sum, the report makes the case for expanding the region's commuter rail system by adding a second, eastward Green Line to complement the westerly Red Line – although its feasibility depends on whether the tracks can become lined with dense new transit villages developed around passenger stations.

The Cap Metro report provides responses to the 11 multipart questions in the Trans­port­a­tion Investment Decision Tree adopted in May by the Transit Working Group. That committee of the Capital Area Metropolitan Planning Organization will meet to publicly vet the Green Line proposal in mid-October; in November it could consider a streetcar urban circulator proposal. The brainchild of state Sen. Kirk Watson, the Decision Tree requires a holistic cost-benefit analysis based on regional values and overall planning goals. As CAMPO chair, Watson pushed for a new evaluation process to pre-empt both knee-jerk "costs too much, does too little" rejections of rail transit and "all rail is good" rubber-stamping (see "Working on the Railroad," Feb. 22).

Likely to engage Central Texans most are the benefits addressed under question No. 2: Mobility, economic development, environmental and public health, and social equity/quality of life. While the report is rich in data, the numerous attached letters of support speak warmly to the transformative power of the project. "This future transit service will enable abundant and permanent mobility, economic, health, sustainability, and social equity benefits," states Doug Farr, a consultant for the city of Elgin on sustainable urbanism. "Corridors integrating transit and land use are essential strategies in the long-term sustainability and competitiveness of regions." He adds, "Communities around the country (and world) are investing in transit and integrating it with patterns of land settlement that support both human and environmental health, sustainable neighborhoods and districts."

Ridership: Will They Come?

On its face, the current population along the route isn't dense enough to justify the estimated system costs: $161 million to $192 million in capital expenses and $10 million annually for operations and maintenance. While about 50% of the Elgin work force commutes to Austin, for example, that community has only about 10,000 residents. Yet by 2030, the report projects 7,000 to 12,000 regular weekday riders – or up to as many as 18,000. Add weekend and reverse-commute riders, and the estimated annual total surpasses 3 million riders. According to the report, that puts the annualized cost per passenger mile in the range of 64 cents to $1.20.

Cap Metro's Todd Hemingson characterizes the Green Line ridership numbers as "very reasonable early estimates." The consultant team led by Parsons Brinckerhoff derived them from existing transportation data for Central Texas. More detailed ridership forecasting would be done as the project advances; for example, initial ridership data on the Capital MetroRail Red Line to Leander would be incorporated. CAMPO staffers are working on enhanced passenger rail modeling within their official regional travel model; Hemingson said that "will ultimately be the best tool for predicting future ridership."

Is it plausible that, within a couple of decades, 12,000 daily rail commuters really might use this line? Between Manor and Elgin, much of the land traversed by the existing tracks is undeveloped pasture and farmland. But Central Texas is expected to have gained 1 million more people some time between 2030 and 2040. If 10% of them settle along the East Austin growth corridor, that would add 100,000 in population; if just 10% of those folks commuted by rail daily, that translates to 10,000 Green Line riders. Many Central Austinites aren't crazy about adding more density, congestion, and infrastructure strains to their older neighborhoods. Presumably, NIMBYs would be enthusiastic about encouraging the Austin-migrating hordes to settle instead along a commuter rail line that stretches out to Elgin. "I do indeed believe that specific corridor will grow like crazy over the next 30 years," commented city of Austin demographer Ryan Robinson.

If that's true, how best to plan that growth?

Another key benefit touted in the Cap Metro report is that offering rail transit to residents of East Austin and to the communities around Manor and Elgin can advance social equity. In part because housing is cheaper farther out from Austin, many current corridor residents are of low to moderate income and people of color. In the city of Elgin, the median household income is just more than $48,000 (nearly $20,000 lower than in Austin). About 46% are Hispanic, about 15% African-American, 21% Anglo, and 17% other. Of the 3,700 students in the Elgin Independent School District, about 2,300 (62%) are economically disadvantaged. As gas prices rise, residents who moved to the area for affordable housing are finding that the cost of commuting is eating up the savings. The report and supporting letters sing the benefits of providing strapped, far-flung households with transit for access to the jobs, resources, education, and health care available in Austin. By allowing residents, in theory, to get by with one less car, the Green Line could ease life for working-class families.

But here's the rub. The report simultaneously touts the heady powers of transit-oriented development to increase property values. A study of just the Austin-Manor portion projects a $398 million increase in the property tax base by 2030, with 16% directly due to new passenger rail. Those increases – the additional increment in property value – likely would be captured to help finance the project. To be sure, darling New Urbanist villages developing around rail stops, chock-full of swank condos and upscale retail, would provide the richest tax increment financing for the line. But as we've already seen on the near Eastside, such gentrification also becomes a recipe for displacing longtime residents.

Hemingson noted that jurisdictions with land-use authority around the rail stations could enact an affordable-housing plan for the TODs, involving the affected communities. "Capital Metro will work closely with stakeholders and municipalities as this effort progresses, building upon the station area planning that the City of Austin is now wrapping up," he said by e-mail. (So far, Austin's City Council has stood by an ambitious goal of 25% affordable housing within TODs.) "Lessons learned and best practices can be applied to the A-M-E line. Also, while the alignment does pass through developed areas close to Austin, much of the route traverses rural, largely undeveloped land, which minimizes any potential displacement."

A primary reason for initially designating the East Austin growth corridor was to encourage new regional development to move away from the Edwards Aquifer and the city's Drinking Water Protection Zone. The Green Line, in theory, could prove a powerful driver in achieving this environmental goal.

However, there's no Save Our Springs Alliance or Hill Country Conservancy for the Eastside. The Cap Metro report notes that the Eastside "is typically viewed as more environmentally receptive to urban development than is the western portion of the region." Yet who will champion protection of the many creeks that cross the rail line's path, especially those close to planned stations? Much of eastern Travis County is productive agricultural land, and what remains of the Blackland Prairie also merits conserving. Elgin and Manor residents favor this "green" line in part because they want to preserve the area's rural character. But good TOD intentions provide no guarantees that unattractive subdivisions of cheap starter homes won't replace the waving fields of sorghum. In advance of the rail project, jurisdictions and conservationists would need to actively protect sensitive lands and acquire prime land to increase parkland and open-space equity for Eastside residents.

Though the report doesn't mention it, one excellent tool available is 2006's "The Travis County Greenprint for Growth," a conservation planning initiative of the Trust for Public Land. (See "How Green Grows My County?" Dec. 14, 2007.) The "greenprint" identifies high-priority areas to preserve or to acquire as parks, before they are lost to development. Highlighted are conservation opportunities in far eastern Travis County, along the floodplains of the Colorado River and its tributary creeks. Envision Central Texas and the Trust for Public Land are currently creating greenprint maps for the full five-county region, including Bastrop County.

"We are aware of and support the ECT/TPL 'Greenprint' study, and we see this project as an important tool to help achieve the goal of protecting sensitive lands," said Hemingson. "Thorough environmental analysis will be performed before the project advances to a design phase."

In evaluating the submittal from Cap Metro, the CAMPO Transit Working Group will make a maiden voyage with the new Decision Tree process. (What's learned on this project is expected to benefit evaluation of the more complex Austin streetcar circulator project, for which a Cap Metro submittal should be ready around the end of the year.) If the Green Line submittal finds favor with the 17 members of the Transit Working Group, the next challenge will be determining exactly how to pay for the system.

The financing discussion in the preliminary review only identifies more than 20 potential pots of money and a willingness among regional entities to discuss how they might partner. The report is silent on whether those pots hold the necessary $161 million to $192 million; Capital Metro's contribution would likely be the right-of-way and the rail line itself. (The Decision Tree questions on financing specifics likely will be addressed in a subsequent Transit Working Group submittal.) Together, the prospective funding partners might need a year to research and negotiate a viable financing deal that satisfies everyone's interests.

Once a financing plan is crafted, the CAMPO Policy Board would vote on whether to officially put the project in its 2030 (soon to be 2035) long-range regional transportation plan. At some point, voters would have to give Cap Metro the authority to operate the Green Line; jurisdictions desiring to use bonds or other taxing authority also would need voter approvals. Potentially, a May 2009 voter referendum on the narrow issue of Cap Metro authority could include both the Green Line and the streetcar circulator proposed for Central Austin – an essential system component to enable commuter rail to really work.

If CAMPO's new public vetting process works correctly, the Green Line and its cost/benefits will be judged not as a stand-alone project but rather as one component in a big-picture mobility solution. Whether the Transit Working Group can punch that ticket remains to be seen. 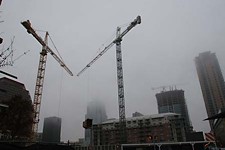 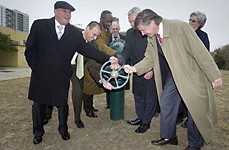