How Elgin got the New Urbanist transit dream 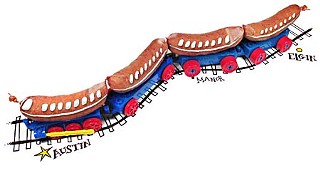 "There's no reason why Elgin shouldn't be the national model for how to do it right!"

Over lunch at Southside Market & Barbeque – the hot-sausage pride of the "Sausage Capital of Texas" since 1882 – Elgin City Manager Jeff Coffee and a small group are talking about how to grow the town, from its present size of 10,000 residents to about 40,000 residents in 20 years. By "doing it right," Coffee means following the principles of New Urbanism to create a compact, close-knit community with a lively downtown and traditional neighborhoods. As he points out, those principles harken back to the "old urbanism" that spawned the railroad town.

"There would be no Elgin without rail," Coffee says simply. "It was passenger rail as well as freight in the old days. It was the intersection of two major rail lines that created Elgin."

Third-generation Southside Market proprietor Bryan Bracewell speaks to the strong desire of locals to maintain the town's character and sense of community. "I want to see Elgin grow responsibly and wisely," says Brace­well. "I don't think any of us with a stake in this community want to just wait and see what happens."

Located in the second "growth ring" around Austin, Elgin can see the suburban tsunami coming its way. "We can look at Round Rock, Hutto, and Kyle and see what we don't want to become," says Coffee – that is, a bunch of disconnected subdivisions and strip shopping malls, with no there there. Elginites are increasingly stepping forward to urge something different for their community. "Look at Hutto!" says Bracewell. "Do you want to turn into that?"

Can't You Feel It? 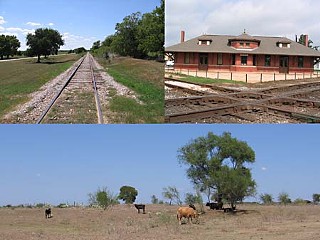 The Green Line, based upon existing Capital Metro right-of-way, would pass through currently undeveloped pastureland and could stop near the historic Elgin passenger depot, now a city museum. (Photos Courtesy of The City of Elgin)

Coffee and Dennis Sheehan, director of the Elgin Economic Development Corp., are conducting a driving tour through the historic downtown, built largely of Elgin brick, with its handsome old freight (1872) and passenger (1906) rail depots, and through tree-shaded neighborhoods where a family home with a porch can be found for a hundred grand. After the hustle of Austin, the town's slow-lane charm is seductive. In a couple of minutes, we're on the edge of town, passing beautiful rolling agricultural land (including several organic farms and ranches, such as Coyote Creek Farm) on the way to our destination – the 80-acre tract along the railroad tracks that the Elgin Economic Devel­op­ment Corp. bought in September 2007 as a site for transit-oriented development.

We get out and stroll through waving grasses. Insects buzz. Cattle graze. What most folks would see here is, well, a cow pasture. But the soft-spoken Elgin city manager is seeing the future. "Can't you almost feel it out here?" he enthuses. "It has so much potential! The vision is just now coming into focus!"

He indicates where a passenger station would go, along the half-mile of rail-line frontage. He points out where Highway 290 runs, not quite visible on the other side of a grassy knoll. He paints a word picture of a three- to four-story transit village surrounding the station, with compact homes above shops and cafes. In time, the surrounding 1,200 acres of pastureland all could be transformed into a compact, walkable, bike-friendly, neighborly community whose residents travel regionally by rail instead of by car. He talks about preserving the most beautiful parts of the topography as parks and open space. I step carefully to avoid the mud.

Currently, no passenger rail service exists between Elgin and the capital city. But it's long been a "someday" project, along the existing Llano-Giddings line owned by Capital Metro. Anticipating a future desire for regional "connectivity," the transportation authority acquired the line and its right-of-way from the city of Austin in May 1998 for $764,262. At the first Capital Area Metropolitan Planning Org-anization Transit Working Group meeting in January, Elgin boldly laid on the table its recent $640,000 investment in a site for transit-oriented development. Forget what you thought you knew about Austin progressives and small-town rednecks: Elgin is now the tail wagging the regional rail system dog. In effect, its TOD gumption has challenged the whole region to take on rail transit solutions to congestion and mobility. 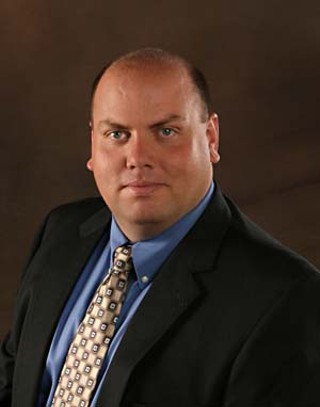 Coffee, a Buda native, said he first was introduced to New Urbanist lingo when he attended a March 2007 SmartCode conference in Austin. There, he and two others from the city of Elgin heard Congress for the New Urbanism founder Andrés Duany extol the virtues of SmartCode: a building-code solution to community land-planning, which promotes good urban form and discourages sprawl. "A lot of lightbulbs went off," said Coffee. "Then one day I was walking down Main Street, and I looked around and said to myself, 'This is New Urbanism!'"

As a letter to CAMPO's Transit Working Group from Envision Elgin Chair Jeff Carter states: "The town's very foundation is the rail, and for active commuter rail service to return to Elgin will energize the town as much now as it did in 1872, when the existing freight depot was built. As then, the economic stimulus spawned by the rail will create a better life for those living in Austin."

Lest it appear that some mysterious urban-design fever is being transmitted via Elgin Hot Sausage, it's important to fully comprehend that "economic stimulus" piece. Mayor Gladys Markert's TWG letter states: "As determined in the July 2007 Elgin Station Initiative and Related Growth Trends, Phase I Study, TOD style development, as opposed to conventional style development, will allow the City of Elgin to realize a tax base increase over typical conventional development of $664,308,112, and net city revenue of $2,446,081, as opposed to negative net city revenue of $1,026,184 should traditional neighborhood development take place."

"At first, a lot of people had a great deal of concerns," Coffee acknowledges. "But as they understand the concept, and as it gets closer to reality – and fuel prices increase – a lot of minds are being changed." 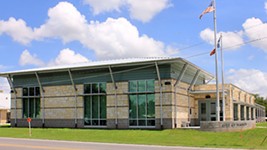 Leander Voted to Keep Cap Metro, but Will Manor and Lago Vista?
Cap Metro's on the ballot again 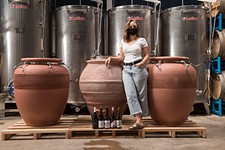