Given the long odds of a GOP victory in HD 49, Republicans don't bother finding a replacement candidate

Tweet
print
write a letter
The sole challenger for Rep. Elliott Naish­tat's House District 49 seat has quietly withdrawn from the race he had little chance of winning. On Aug. 21, the Republic­an Party of Texas confirmed that James Hasik, a business security consultant, withdrew for personal reasons. In a phone message, Hasik said he had effectively withdrawn several months ago (as of July 15, he had raised no money and only spent $8 to register for a campaign website, according to Texas Ethics Commission financial filings). Hasik said he did not expect there to be a replacement Republican candidate and wished Naishtat the best. 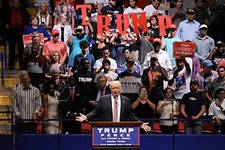