Biomass likely to go forward despite some public opposition

Tweet
print
write a letter
City Council is expected today (Thursday) to approve a $2.3 billion contract with Nacogdoches Power LLC to provide Austin with 20 years' worth of power (beginning in 2012) from its planned 100-megawatt biomass plant fueled with waste wood and logging debris. Council postponed a decision last week in order to seek outside legal advice. Austin Energy officials insist that the project's ability to provide near-constantly available carbon-neutral energy is key to meeting the city's goal of sourcing 30% of its electricity from renewables by 2020 and that its cost is competitive with other energy sources (green and otherwise), though some in the public expressed strong uncertainties with the project.

AE Chief Operating Officer Mike McClus­key on Tuesday addressed criticisms over the haste with which the deal was introduced to the public (first appearing on an Aug. 7 council agenda). "We've always talked about needing solar, biomass, and wind," with respect to the city's renewable goals, he said, explaining that the citizen-volunteer Resource Management and Electric Util­i­ty commissions were advised of the deal in executive session last spring (both of those commissions ultimately recommended the deal). He also explained that rising construction-material prices only allowed Nacogdoch­es Power to offer the city a price for the month of August, after finalizing contract terms on July 18 of this year.

McCluskey stood behind utility estimates that the project would raise customer rates no more than $2.50 per month, and could in fact cut rates by $1.50. He also allayed concerns over the availability of the plant's fuel supply, saying Nacogdoches Power expects to have the first 10 years of wood-waste fuel under contract and that economics make subsequent competition for the fuel very unlikely.

Asked why the city chose to negotiate directly with Nacogdoches Power, as opposed to opening the biomass contract to competitive bidding (which some observers claim state law requires), McCluskey said, "Nacog­doches Power was the only game in town." He said that in terms of scale and readiness to break ground, "they were the only ones we were aware of who could've bid this project to us." He also explained that the city lost multiple opportunities to buy power following a 2005 open bid for renewable energy after taking too long to negotiate contracts, leading AE to favor direct negotiations with one firm.

Council Member Lee Leffingwell at last week's meeting said that we need this 100 megawatts of power by 2013. "It is a choice of either renewable energy, natural gas-powered energy, or coal energy," he said. "I think the pros so heavily outweigh the cons that the action we need to take is very clear." (For more, see "Biomass: A Question of Wood, Not Could," Aug. 22.) 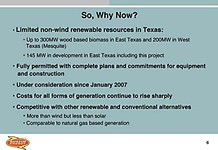 Then There's This: Excuse My Biomass
Revisiting the city's decision to hook up with a chip-burning plant Biomass: A Question of Wood, Not Could
Council will vote this week on a proposed wood-waste-fueled power plant, but just because it's carbon-neutral doesn't mean it's perfect