Monthly presses on in wake of layoffs, shrinking budget 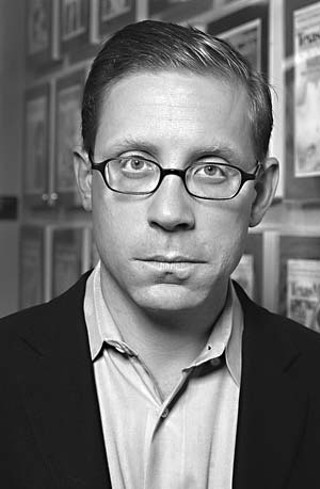 At a time when any magazine not running pictures of Brangelina's spawn is struggling, longtime Editor Evan Smith, a nebbish Yankee with slicked-back hair and glasses, formally takes over next week as president of Texas Monthly, the most Texas of Texas magazines. Only the third editor in the magazine's history, he will replace retiring founder Mike Levy, the only publisher in the magazine's 35-year run.

"I was good for the first 35 years, and there's no question he's perfect for the next 35," said Levy, a staple of the local scene, who helped shape the magazine's iconoclastic image.

But Smith, 42, the public face of the magazine since taking over as editor in 2000, faces a host of new challenges in his expanded business role, as corporate parent Emmis Communications flounders in the modern media age. Earlier this month Emmis, which bought TM from Levy in 1998, eliminated 13 positions from the magazine – about 10% of the staff – as part of a corporatewide downsizing. (Six of the positions were vacant and won't be filled.) The cuts included Executive Editor Sam Gwynne, the former Time staffer who joined the monthly in 2000 and wrote several of the magazine's spotlighted features, such as the recent profile of controversial Land Commissioner Jerry Patterson.

"I was very surprised," said Gwynne, who was on leave to write a book on the Coman­che Indians. "I didn't see it coming."

Texas Monthly's ad pages are down about 10% from a year ago, according to MediaWeek magazine. But Smith says the magazine is still "on target to be profitable this year, just not as profitable as last year." Although overall circulation is steady at about 300,000 copies a month, the magazine posted a 16% jump in newsstand sales in the past year, compared to a 6% drop for the rest of the industry, according to the Audit Bureau of Circulations. In this economy, "holding on is tantamount to being up," Smith said.

But "holding on" is a tougher chore these days for Emmis, which primarily owns radio stations, including KGSR, KLBJ AM and FM, and three others in Austin. In July it reported a net loss of $1.1 million for the quarter and shuttered Tu Ciudad, its Spanish-language magazine in Los Angeles. It also finished the sale of its 16 television stations, raising $1.24 billion. But the sell-off has done little to impress Wall Street. Emmis shares are trading around $2.15 a share, down from $12 in November 2006; in 1999 the company's shares were trading above $60.

With ad sales dropping around the industry, in his new dual role Smith will face extra pressure on the Chinese wall separating advertising and editorial. But there is ample precedent for combining the positions, he notes, including Rolling Stone's Jann Wenner and former Newsweek CEO Rick Smith. "I will never compromise the integrity of the journalism for anything," he said.

In publishing circles, Smith is something of a phenomenon, drawing both admiration and smirks. With a master's degree in journalism from the Medill School of Journalism at Northwestern University, he joined TM as a senior editor in 1992 after a stint as a deputy editor at the New Republic. Rising through the ranks, he moved into the editor job in 2000, following in the footsteps of founding Editor Bill Broyles and Gregory Curtis.

Since 2000, Smith has shown himself to be a first-rate gatherer of national awards and accolades, including a National Magazine Award for General Excellence in 2003. In addition to his Texas Monthly Talks interview show, which airs on Texas public broadcasting stations, Smith is a regular on the social and cultural scene, both in Texas and around the country, creating a national profile for himself and the magazine. The Cult of Evan reached new heights last year when Slate columnist Jack Shafer suggested Smith might make a good candidate to run the Washington Post, when the editor position opened up (which made even Smith's fans say, "Huh?").

Smith's critics – and they are out there – have watched his rise with wonder and bemusement. "He's a schmoozing expert," said one former staffer, who asked not to be identified. Some say he inherited a great magazine and turned it into a good one. More than ever, they say, the magazine devotes space and resources to light features on repeated topics, like beaches, barbecue, and cowboys, hoping to appeal to a mainstream national audience. "In the old days, writers usually came up with stories," the ex-staffer said. "Now stories are more likely to be assigned and more likely to be repeat stories that have sold well in the past."

But Smith denies the charge, saying the mix of light and in-depth features hasn't changed dramatically over the years. He says his primary interest remains on politics and public-interest coverage. "Long-form journalism is still at the center of what we do," he said. "Our joint mission is to promote the Texas that we know is good and to shine the light on areas that are not working. We're not a chamber of commerce magazine. We're not a booster magazine."

Going forward, Smith says the magazine needs to continue to "punch sacred cows" and "provide greater focus on geographic and ethnic diversity in our stories and on our staff in a way that reflects the reality of Texas in 2008."

Gwynne, with no reason to suck up to the man who just fired him, calls Smith "the best editor I've ever seen on any level." "If you really hate Texas Monthly and think the writing sucks, that's Evan," Gwynne said. "But if you think it's good, that's Evan's deal. He brought us all in."

TM is still one of the few magazines with a staff of full-time writers and the resources to send more than a dozen staffers to work on a single feature, even if the feature is a report on barbecue. "It's not a management that is counting paper clips," Gwynne said.

But that may change, as Emmis attempts to wring every dime from its properties. Some industry observers speculate that Emmis may continue to sell off assets, perhaps even Texas Monthly. Few expect the magazine advertising environment to improve in the next six months.