Tweet
print
write a letter
• Attorneys Still Hope to Halt Execution At press time, the execution of Jeff Wood was still on the schedule for this evening (Thursday). Wood was convicted as a party to the 1996 murder of his friend, Kerrville Texaco clerk Kris Keeran, even though he played no part in the murder. The triggerman, Danny Reneau, was executed for the crime in 2006. On Aug. 19, the Texas Board of Pardons and Paroles voted 7-0 to deny clemency for Wood, which would have commuted his sentence to life in prison. Wood's lawyers are now urging Gov. Rick Perry to grant a 30-day reprieve while the courts consider a final appeal seeking the appointment of an expert to assess Wood's competency to be executed. The Court of Criminal Appeals denied without comment Wood's appeal on Monday; Wood's attorneys have appealed that decision to federal court. Wood was initially found incompetent to stand trial in 1997 because he was incapable of helping his attorneys in his defense. After being sent to a state hospital, he was later deemed competent to stand trial but sought to fire his attorneys. The trial judge declined to let him represent himself, opining that Wood didn't appear capable of handling the task. (For more on the case, see "Defense Lawyers Try to Halt Execution," Aug. 15.) – Jordan Smith • AISD Budget Squeeze The Austin Independent School District plans to approve its new budget, along with the means for paying for it, this week. At a public meeting on Aug. 18, the board of trustees was broadly in support of a locally generated budget (not including state and federal contributions) of $719,974,140 for 2009 and putting a tax rate increase of 4 cents per $100 of property value on the November ballot. Board Vice President Vincent Torres summed up the consensus when he said: "Does this budget meet our needs? I don't think it does. Can we afford to spend more? I don't think we can." The big question remains how much the district will have to dip into its fund balance to cover the rest of the budget, with estimates ranging from less than $15 million to more than $30 million. The board has a special meeting to discuss the proposed budget at the Carruth Administration Center Board Auditorium, 1116 W. Sixth, Building B, Room 100, on Thursday, Aug. 21, 7pm, before taking its final vote on Aug. 25. – Richard Whittaker

• WilCo Gagging on Landfill On Aug. 12, the Williamson Co. Commissioners Court voted 4-0 to renegotiate a controversial contract with Waste Management Inc. in the continuing tug-of-war over who really controls the Williamson County Land­fill. But the fireworks began after the vote Tuesday, when County Judge Dan Gattis "asked" the commissioners and "told" staff "to refrain from any comments, open comments on ... the contract" during negotiations. In its Aug. 15 newsletter, the Hutto Citizens Group – which wants to limit the landfill's height to 70 feet and prevent it from becoming a regional trash receptacle – blasted what it called Gattis' "gag instruction" or "gag scenario" as sending a "chilling message" and called this limitation of free speech "out of bounds." When asked for a response, Gattis denied he'd issued a gag order but said that in the interest of "fairness," exchanges between WilCo and WMI shouldn't be aired in the media pending a new contract. "There's no way to come to an agreement that way," he told the Chronicle, adding, "Nobody does that." Visit www.huttocg.com for details. – Patricia J. Ruland

• Border-Wall Protest Wall Activists will mobilize a "wall of opposition" to the proposed Texas border barrier during the five-day Peace and Unity March set for Aug. 27-31. Marchers are to convene at Fort Hancock on Wednesday, then proceed to Alamo Alto, Tornillo, Fabens, San Elizario, Socorro, Ysleta del Sur, and El Paso. According to Jay Johnson-Castro Sr., founder of Border Ambassadors, which has conducted numerous border protests, "Marchers may participate for the entire five days, for any shorter time, or for the nightly events only." This protest will put El Paso in the spotlight, a border community with "the deepest and longest history, some four centuries of human struggle," the release notes, adding that El Paso's wall will be a 56-mile-long "iron curtain." Said El Paso organizer Carlos Marentes, "This wall ... is said to be a form of 'security' but there can be no security when division and hate are created." To participate, contact Johnson-Castro at 830/768-0768 for details and a map. – P.J.R.

• Teenaged FLDS Wife in Foster Care On Aug. 19, District Judge Barbara Walther ordered a 14-year-old wife of imprisoned Fundamentalist Church of Jesus Christ of Latter-day Saints poly­gam­ist prophet Warren Jeffs to be placed into state foster care. The teen was allegedly married to Jeffs when she was just 12, with the blessing of her parents, Merril and Barbara Jessop. Walther ruled that there was "uncontroverted evidence of the underage marriage" and that mother Barbara would not guarantee her daughter's safety, reports the Associated Press. Schleicher County court documents quote the girl telling her Child Protective Services caseworker that underage marriage couldn't be "a crime because Heavenly Father is the one that tells Warren when a girl is ready to get married." This is the first time the state has sought to take custody of any children living at the Mormon breakaway sect's West Texas compound since the Supreme Court ruled in May that the 400-plus children taken from it were taken without sufficient evidence that they were in immediate danger of abuse. According to the Abilene Reporter-News, 364 of the children originally taken from the ranch are still subjects of ongoing child abuse investigations. (For more on the FLDS in Texas, see "Meet the New Neighbors," July 29, 2005.) – J.S. 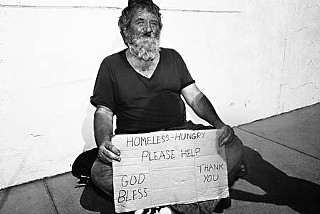 Results of a City Council-commissioned study on panhandling were presented to the Health and Human Services Department this week. The findings? After surveying more than 100 panhandlers, the survey team from UT's Center for Social Work Research found that the average solicitor is white, male, over 40, homeless, and making efforts to work, but "soliciting intermittently for daily survival." Calling the study "one expensive 'we told you so,'" ACLU Austin head Debbie Russell writes, "Taxpayers coughed up $48,000 for the City to hear what they've been told time and time again by countless groups and individuals: Panhandlers are not criminals; People don't choose to solicit, it's a last resort; Barriers to employment are external, not internal, for the most part (lack of ID and living wages, etc.)." She also writes, "There are no 'panhandler mafia rings,' and they are not making hundreds a day," referring to the council-posed question of whether some solicitors are part of organized fundraising rings. In addition, writes Russell, "A significant percentage of panhandlers are military veterans – about 30%." Russell points out that the $48,000 could have been spent on either "seven one bedroom apartments for a year, three Family Self-Sufficiency program grants, ten emergency shelter beds," or more. – Wells Dunbar Civil rights activist Mae Marion died Aug. 17 at 83, after devoting most of her life to the good of Austin and the Democratic Party. Marion ran for public office several times. Here she's shown with supporters on election night in 1991, wearing her trademark keep-on-keepin'-on smile despite losing her bid for mayor. Visitation will be at 7pm Friday at David Chapel Missionary Baptist Church, 2211 E. MLK Blvd. Funeral services are at 11am Saturday at the church.

The city of Austin responded quickly last week to problems Mac users were having accessing new online maps that allow property owners to see which areas of town are considered to be floodplains (see "Naked City," Aug. 15). "The floodplain map viewer is [now] compliant with Mozilla Firefox 2.0," said Watershed Protection and Development Review Department spokeswoman Lynne Lightsey, adding, "We're working to make it a little more intuitive." Safari loyalists have to wait a little longer, as there are compatibility problems between the browser and the geographic information system mapping technology the city uses. "We're getting ready for a new program for all our viewers that should fix the problem," said Lightsey, "but that's several months away." Meanwhile, PC users and Mac owners with Firefox can find the maps at www.cityofaustin.org/watershed/flood.htm. – R.W. 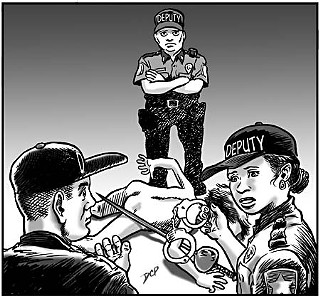 Williamson County's safe from the naked man with the sword, now that David John Thistle, 38, of Round Rock, is in jail on $100,000 bond. On Jan. 2, a dozen sheriff's and constable deputies apprehended Thistle as he lay naked on a balcony of the courthouse, with a sword at his side, after "acting strange," "screaming," and disrobing. They then transported him to a psychiatric hospital.

Subsequently, according to last Monday's Round Rock Leader, District Attorney John Bradley deemed the county's jail diversion effort "not as successful as we hoped it would be." So Thistle was booked on Aug. 6 for third-degree felony possession of a knife at a polling place – the police affidavit describes it as a "sword approximately over 36 inches long" and encased in a skull-head cane. Bradley told the Leader his priority was public safety, but the article also noted that Thistle "never brandished the weapon." An Aug. 7 psychiatric assessment pronounced Thistle "dangerous if mishandled" and recommended the paradoxically termed "post-booking diversions." Though Thistle takes 14 medications, according to the assessment, he will not be "diverted to MHMR Services" or the Austin State Hospital or community-based services – just jail. His first criminal hearing is Aug. 25. – P.J.R.