The wheels are in motion for an urban rail system 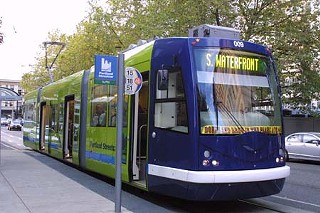 It's full steam ahead! In an Aug. 8 memo to City Council, new Assistant City Manager Sue Edwards laid out an ambitious work plan for developing a full proposal for an urban rail streetcar system. The work plan is based on the system recommended by the ROMA Austin consultant team, presented at council July 24 (see "Developing Stories," Aug. 1). Capital Metro staff will work closely with city staff and ROMA; if approved by its board, Cap Metro will be a joint sponsor of the proposal to be submitted to the Transit Working Group at the Capital Area Metropolitan Planning Organization.

The schedule is designed to produce a completely vetted system proposal – including a viable, multipartner financing plan – by January 2009, in theory allowing a voter referendum next May. But proposal approval is not a foregone conclusion; the TWG evaluation will scrutinize sequentially 1) need, 2) benefits, 3) costs, and 4) financing.

A) Stakeholder Input: Over about six weeks (late August to early October), city staff and ROMA will lead two rounds of three community meetings each, one for each of the three main geographic segments of the recommended 15.3-mile route. Austinites can voice concerns and opinions about alignments, dedicated-lane vs. shared-running tracks, neighborhood impacts, etc. In addition, four community focus groups will address other Downtown mobility issues. A final town-hall meeting on rail issues will cap the process, and council will receive a summary of all this input with the draft step one proposal.

B) Step One Proposal for Transit Working Group: The draft should be ready for council consideration by late October or early Novem­ber and will address all questions on the TWG Transportation Investment Decision Tree, other than financing. It should be forwarded to the TWG by November or early December.

C) Step Two Financing Proposal for TWG: The financing proposal will be developed concurrently with – but separately from – the step one proposal by the city manager, city staff, Cap Metro, and financing consultants. (Multiple finance partners and mechanisms are anticipated.) The goal is to have it ready to go, if and when the TWG approves the step one submittal, and ready for TWG review in early 2009.

New Rail Plan Rolled Out
The latest line on streetcars