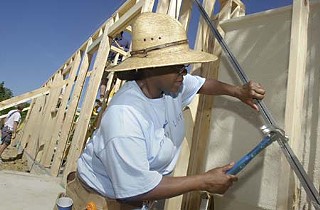 • A Broader Vision for Tax Holiday The Tax-Free Weekend, better known as the Texas sales-tax holiday, is this weekend: Aug. 15-17. The idea of the holiday is that stores do not charge a sales tax on clothing less than $100 per item (in Travis County, that tax rate is 8.25%), but the complete list of tax-free goods is much more complicated. For example, hunting vests, children's novelty costumes, and adult diapers are tax-exempt for the three days, but knee pads, safety glasses, and sports helmets are not. Sen. Rodney Ellis, D-Houston, is pressing for energy-efficient and hurricane preparedness items to be added to next year's list. Ellis, whose Senate Bill 441 originally created the holiday in 1999, said, "Texas has the fifth most regressive tax system in the nation, and it is times like these that hit Texans the hardest economically." For a full list of what is and isn't exempt, visit the state comptroller's website at www.window.state.tx.us. – Richard Whittaker

• State Funds 'Backdoor' Voucher Deal The Texas State Teachers Association failed Monday to stop the Texas Education Agency from distributing an initial round of seed money for its new dropout recovery grant program. A district judge opposed TSTA's injunction, saying the distribution of funds would not put TSTA members in any imminent danger. Opponents of the $6 million dropout recovery program have labeled it a backdoor effort to introduce vouchers, funneling public money to private schools with no accountability. The Texas Freedom Network issued a scathing statement Monday afternoon, tying the one winning private-school applicant to Jim Leininger, Gov. Rick Perry's high-dollar supporter who has actively campaigned for vouchers. In return fire, Leininger's representative issued a statement on Tuesday saying that the success of low-income children appeared to be inconsequential to Texas Freedom Network and that his privately funded choice program in San Antonio had seen children not only graduate from high school but also go on to college. – Kimberly Reeves

• ABIA vs. Private Pilots With private airstrips in short supply – and no general aviation airport in Central Texas – private pilots have appealed to Austin's Aviation Department for additional hangar space and cheaper fuel rates at Austin-Bergstrom International Airport. But that doesn't look likely. In a report presented at Tuesday's Austin Airport Advisory Commis­sion meeting, the Aviation Department's bottom line was that more noncommercial aircraft at ABIA would mean longer delays, higher costs, and a shorter timeline until a new $1 billion runway would be necessary. Pilots scoffed at the charges, saying ABIA is far from being at capacity and that Austin has an obligation to its flight community to step up. The Texas Department of Transport­a­tion has been unable to find a location for a general aviation airport in Central Texas, harkening back to the days of former Houston Rep. Ron Wilson's active disdain for Austin's lobbying for a new airport location. – K.R.

• Meet Austin's Transportation Director City Manager Marc Ott announced on Aug. 12 that engineer Robert Spillar will become Aus­tin's first ever transportation director, responsible for creating a comprehensive transport plan for the city. Spillar – an expert in park-and-ride as well as high-occupancy-vehicle and managed-lane-system planning and design – is the former director of traffic management for the city of Seattle and currently vice president of international engineering firm Parsons Brinckerhoff Quade and Douglas. Around Austin, he has advised on the Highway 183 corridor improvement study, as well as transport projects for Capital Metro and AISD, and he was part of the Greater Austin Chamber of Commerce's pro-tolling Take on Traffic project. – R.W.

• New Spanish Newspaper Newspaper stands around town are carrying a new Spanish-language green-sheet, Buena Suerte, intended to reach Austin's underserved and growing Hispanic population. The free, Houston-based weekly is made up primarily of classified ads, and it also aims to tap into the 12,000 Austin-area businesses that are owned by Hispanics. Curiously, Buena Suerte could be construed to have a subtle Irish theme, with a shamrock-sporting logo and a title that translates as "Good Luck." Spanish-speakers and the Irish alike can find Buena Suerte at various markets around town, including La Michoacana, or check it out online at www.buenasuerte.com. – Nora Ankrum

• Brackenridge Redevelopment Moves Forward With so many interest groups tied to the 345-acre Brackenridge Tract in West Austin – UT graduate students, the university's biology program, local residents in the high-dollar surrounding neighborhood, and even the city's golfers – the UT Regents' efforts to redevelop the tract faces a minefield of opposition. Still, regents continue to push forward with redevelopment of the tract as a money-making measure for the university system. At an informational meeting Tuesday, the regents' consultant group, headed by New York-based Cooper, Robertson & Partners, told the crowd there was widespread support for the preservation of green space and for compatible development. Lead consultant David McGregor also acknowledged the importance of the university facilities on the land but noted that nothing tied those facilities to that tract. While consultants have not said yes or no to anything, they have promised to be ready with a general philosophy for the tract when they convene the planning process in November. The team, which is being paid a little more than $5 million, is expected to produce two options for the tract for regents to consider next summer. A series of open-to-the-public work sessions have been scheduled for November, but because of the timing near Election Day, West Austin neighbors are worried that turnout will be low. – K.R.

For months Capital Metro's proposed changes to services for the disabled have been the subject of debate at focus groups, town-hall meetings, boardroom discussions, and, more recently, court hearings. Last month, the Texas Civil Rights Project, acting on behalf of riders with disabilities, filed suit against Cap Metro in federal court. On Tuesday, the two sides came up with a prescription for the agency's paratransit pains: more talking. At a court-mandated public mediation hearing, both parties reached an agreement to form what's tentatively called the Metro Mobility Working Group, consisting of three Cap Metro staffers; three members of the Access Committee, a volunteer group that oversees paratransit services; and a seventh member to be elected by the six-person panel. The committee will try to reach a compromise on some of the proposal's most contentious features, namely, alterations to the reservation system, mandatory in-person screenings for paratransit eligibility, and the elimination of subscription taxi vouchers. Members of the access committee earlier complained that the proposal was pushed through despite the committee's opposition. The committee will hold meetings and public hearings before making a recommendation to the Cap Metro board, but ultimately the agency will have final say, according to the agreement. – Justin Ward

Williamson Co. Constable Gary Griffin, who sued the WilCo Commissioners Court in 2005 for unconstitutionally slashing his budget midyear and giving the money to handle mental-health calls to the sheriff's office, is seeking a hearing before the Texas Supreme Court – but Austin's 3rd Court of Appeals is standing in his way, according to an Aug. 7 motion filed by attorney Bill Aleshire. On Nov. 28, 2007, the 3rd Court, with Justice Kenneth Law presiding, denied Griffin's appeal of a 2006 ruling for summary judgment. On Dec. 11, 2007, Griffin filed a motion for rehearing, but the 3rd Court has yet to request a response, "suggesting the motion was not well-received" and precluding a final step in the appeals process, as the current motion asserts. Both courts erred by "not applying the proper standard ... for a summary judgment case," the motion argues. Griffin and others have questioned a possible conflict of interest in the case because 3rd Court of Appeals Justice David Puryear's son worked for County Attorney Jana Duty. Additionally, Duty helped plan a fundraiser for Law, which occurred before the release of the 3rd Court's opinion. For more, see "Appeals Court Rules Against WilCo Constable," Dec. 21, 2007. – Patricia J. Ruland

Does Your Mac Live in a Floodplain?

The city of Austin has new floodplain maps online – intended to give homeowners, businesses, and renters a guide to areas at risk for flash flooding – as a handy Web-based interactive tool. After a two-year consultation process with the Federal Emergency Management Agency, Watershed Protection and Development Review Department spokeswoman Lynne Lightsey explained, "The big change is that we're moving from old paper maps to digital." In the 30 years since the last map update, changes in the city's flood-control program mean some areas, like Tannehill Branch Watershed, are now outside the floodplain, while others, like Fort Branch and Carson Creek watersheds, are considered at risk. City staff recommends residents use the new map to see whether they need flood insurance. If they do, they could take advantage of a lower-priced preferred risk policy before Sept. 26 – the day insurance companies will start using the new maps to calculate rates. However, Apple Macintosh users are still experiencing problems getting the website to work properly. Lightsey, a Mac user herself, said: "We've tried to test that out to solve that problem. I had been adamant that these have to be Mac compliant." In the meantime, at least PC users can check out the new maps at www.cityofaustin.org/watershed/flood.htm. – Richard Whittaker