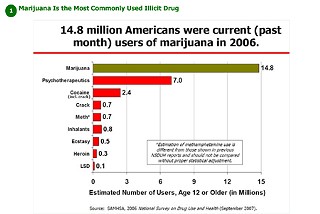 In 1972, Republican former Pennsylvania Gov. Raymond Shafer presented to the president the findings and recommendations of the National Commission on Marihuana and Drug Abuse, which he had been tapped to lead. Shafer's commission recommended ending pot prohibition and instead implementing "a social control policy ... to discourage marihuana use, while concentrating primarily on the prevention of heavy and very heavy use." Decriminalizing simple possession would be crucial because "the criminal law is too harsh a tool to apply to personal possession even in the effort to discourage use," reads the report. "It implies an overwhelming indictment of the behavior which we believe is not appropriate."

President Richard Nixon declined to implement any of the recommendations.

Thirty-six years later, Rep. Barney Frank, D-Mass., and six co-sponsors are giving it another go. On July 30, Frank took to the hill for a morning press conference joined by Reps. William Lacy Clay, D-Mo., and Barbara Lee, D-Calif., and drug policy reformers from the National Organization for the Reform of Marijuana Laws, the Marijuana Policy Project, and the Drug Policy Alliance Network, to talk up the first federal pot decriminalization measure filed in Congress since 1978. House Resolution 5843, which Frank filed in April with Republitarian Texas Rep. Ron Paul, would eliminate all federal penalties for pot possession of up to 100 grams and the "not-for-profit transfer" of pot between adults for "personal use," and would allow for a maximum fine of $100 for public pot use. The measure would defer to the states to use law enforcement resources to police pot in accordance with state law, but would direct the feds to mind their own business. That's a big deal for residents of 12 states that have legalized marijuana for medical use, but who still face interference by federal narcos that routinely raid medi-pot dispensaries, especially in California, in the name of upholding federal drug prohibition. "[W]hat we've had, particularly under this administration, the specter of people who believe in limited government and state's rights using federal law enforcement ... to pursue people who've used medical marijuana in conformance with state laws," Frank said. "This would put an end to that practice."

The bill has picked up five more Democratic sponsors, including Rep. Clay, who said he opposes using federal tax dollars to pursue an "arcane holdover" from a "phony war on drugs that is filling up our prisons, especially with people of color," according to the online edition of the St. Louis Post-Dispatch.

Frank argued that the feds shouldn't be in the business of policing the private lives of otherwise law-abiding people. "I don't think that it is the government's business to tell you how to spend your leisure time," he said. "Now, there are a lot of things that people do that I don't do and I think they should be free to do them. There are some things that I do that other people don't do and I want to be free to do them."

On the other side of the debate stands the White House Office of National Drug Control Policy, home to federal drug czar John Walters, which sent several warrior drones to the morning presser to flog their own piece of "news," the July 29 release of a 2008 marijuana "sourcebook." Unfortunately for the czar, the sourcebook is lame. Really, really, really lame. Sure, it's full of colorful charts and graphs, but what exactly do all these fancy visual aids tell us? That the warriors will seemingly do anything to make marijuana and its users look really bad. The information contained in the new book is, at best, questionable. Take the title: "Marijuana: The Greatest Cause of Illegal Drug Use." Dramatic? Sure, of the sort you'd expect from, say, a Lifetime movie. But, really, can pot actually "cause" drug use? It gets worse: In one chart, the ONDCP suggests that federal research shows that pot is more addictive for teens than alcohol or tobacco. This, they say, is inherent in the "'gateway' dimension of marijuana – that its use creates greater risk of abuse or dependency on other drugs, such as heroin or cocaine."

That marijuana might be a "gateway" drug is a matter of considerable debate – the only entity that still insists it is is the ONDCP. Other ONDCP factoids raise more disturbing questions. Take the pie chart that breaks down the afflictions for which patients at San Diego dispensaries obtain medi-pot. Ostensibly, it would seem that the ONDCP is trying to make the point that not many patients are actually "seriously ill" – just 2% of the more than 3,000 patients actually were AIDS, glaucoma, or cancer patients, while 98% sought medi-pot for other ailments like back or neck pain, post-surgical pain, or anxiety issues. For starters, it is obnoxious for a bunch of bureaucrats to suggest that some pains just aren't that serious, but it is even more fascinating that the ONDCP would even include this chart for two reasons. (And here's where they certainly could've used an editing eye – if they wanted to make a point, they might've honed their argument to areas that don't make them look like total hypocrites or mean-spirited propagandists. Just a thought.) First, the federal drug warriors have consistently argued that marijuana has no medical uses at all – including this graph seems to concede that long-held point. But, second, and more disturbing, is the data source: According to the ONDCP, they know why patients sought medi-pot in San Diego because they studied 3,636 private patient records seized by the Drug Enforcement Administration during dispensary raids from October 2005 to July 2006. Nice touch.

The only clear message the ONDCP sourcebook sends is surely unintended: People will always use marijuana and will spend a shitload of money to obtain it. According to 2006 figures, 14.8 million Americans are regular pot users, and according to 2001 numbers, pot smokers spent a whopping $10.5 billion on marijuana in 2000. All this despite the three-decades-old war on drugs.