The word is out: If you're a Republican politician running for federal office, work the gasoline price issue for all it's worth, since that's about the only thing the GOP seems to have going for it this election cycle.

Austin Rep. Michael McCaul, who in Larry Joe Doherty faces the first serious challenge of his 3½-year career, was working it hard Monday morning at a Shell station on MoPac North, pumping hands with customers pumping gas. He asked them to give him their gas receipts, which he was then pledging to deliver to House Speaker Nancy Pelosi to harangue her for her supposed inaction on energy legislation. (We know someone as important as Pelosi probably lives a cloistered life, but we're guessing she's gotten the memo on $4-a-gallon gas.) Since the Shell station is a short bus ride from my house (still only $1 for a 24-hour pass!), I joined the fun.

Despite his rather dismal ratings among environmental groups, McCaul insists that he should be considered green and asserts there is no contradiction between his desire to drill in the Outer Continental Shelf and the Arctic National Wildlife Refuge and environmental protection.

"'All of the above' is our strategy," McCaul told reporters. "And I think it's a good strategy. We're looking at alternative fuels. I've co-sponsored a lot of legislation to look at alternative energy and biofuels. And certainly nuclear energy, we haven't looked at that in 30 years. France is 86 percent powered by nuclear. We need to be looking at all these options, and all are made in the United States. And yes, we need to be looking at our natural resources in this country, whether it be oil and gas offshore or in the Arctic region. We could have millions of barrels a day, and the markets would start to immediately respond to that."

Democrat Doherty's campaign sent out a press release that morning anticipating McCaul's photo op, offering what it called a "reality check" on McCaul's record. Quoting a letter from McCaul stating that "the economy of the world is run by and dependent on oil – no matter what the Democrats say," the Doherty statement charges, "What Republican Congressman McCaul fails to note, however, is that he has taken over $107,000 in political contributions from the oil and gas special interests to maintain and strengthen that dependency."

The Doherty release pointed to several McCaul votes, charging that he has voted against legislation making oil price-gouging a crime, against providing tax incentives for the renewable-energy industry, against higher average fuel economy standards in the auto industry, and for tax breaks for the currently highly profitable oil industry. It also points out a vote against releasing a portion of the nation's Strategic Petroleum Reserve, asserting: "Each time the SPR has been tapped or suspended, there was an immediate impact on oil prices. Similar actions were taken in 1991 and in 2000, and oil prices dropped by 33 percent and 19 percent respectively." As for drilling at home, "McCaul ignores independent and government reports that show domestic drilling will have no impact at the pump until 2030."

"It is time the truth comes out," Doherty said in the release. "Michael McCaul has a long history of voting against commonsense, bi-partisan legislation that would have a real impact on America's efforts to become energy independent. Instead McCaul continues the same old pay-for-play Washington-style politics. It is time for real leadership that is independent of the special interests, and will hold Washington accountable."

"I think they're hoping the price goes even higher," McCaul said of Democrats. "I don't know what the logic is of that, to be honest with you."

As for the customers at the Shell station Monday, the ones I saw seemed a bit taken aback by finding a congressman waiting for them at the pump. McCaul pitched softballs such as, "Do you think Congress should do something about [high prices]?" and, "Do you think we should be more energy-independent in the United States?" Needless to say, there were more yes/yes responses than yes/no. 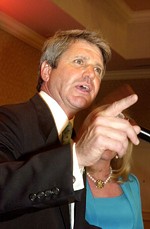