A North Central Austin clinic has neighborhoods up in arms

The proposed $18 million clinic would serve the uninsured and underinsured and replace the Northeast Austin Community Health Center on Ed Bluestein Boulevard. The district, which is independent from the county but can levy property taxes, has said the current clinic is cramped and outdated, while the new facility would accommodate twice as many patients.

Members of the North Park Estates and Gracywoods neighborhood associations have taken issue with the proposed location, which they say is too far north to serve the majority of the clinic's patients. They have also expressed frustration with what they perceive to be the district's lack of outreach to their communities. The district counters that a majority of its patients live within a few miles of the site, and that it is the best option among numerous others considered.

The neighborhood already has enough signatures on a valid petition (from neighboring property owners) to require a supermajority vote (at least six of seven) from City Council on the rezoning. The Zoning and Platting Commission is scheduled to hear the rezoning case Sept. 16. 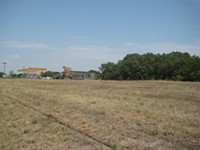