Tweet
print
write a letter
• NEW REGIONAL GROWTH STUDY Envision Central Texas released a study this week (available at www.envisioncentraltexas.org) documenting Central Texans' concerns about planning for regional growth. The study found the Top 5 concerns to be: improving the transportation system, water availability and quality, maintaining housing affordability, the lack of planning resources, and greater coordination on regional issues. An emerging topic of citizen and corporate concern was climate change and energy efficiency. "Across the board there was a strong sense that linking economic, land use and transportation planning is essential," noted the nonprofit. ECT commissioned the study to update its Regional Vision, a plan developed five years ago when ECT solicited public input to produce a "preferred scenario" for growing more compactly and limiting the negative effects of sprawl. Earlier projections that the regional population would double from 2000 to 2020 have been borne out by growth to date. Consultant TIP Strategies worked with ECT staff and leadership to conduct a Vision Progress Assessment, which, according to ECT, included "a detailed series of interviews with local businesses, institutions, and public officials ... [plus] focus groups and public workshops, and ... online questionnaires in the five-county Central Texas region." – Katherine Gregor 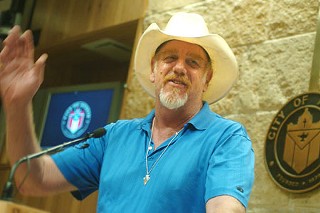 Asleep at the Wheel's Ray Benson was at City Hall Wednesday to plug a new water-conservation campaign. (Photo by John Anderson)

• AN ODE TO WATER "The hard part was finding a clean word that rhymes with greenhouse gases," said country music legend Ray Benson Wednesday at a City Hall event hyping his new TV and radio ad encouraging Austinites to conserve water. "For me, the most important thing was understanding the connection between water use, energy use, and emissions." Council Member Lee Leffingwell said that more than 40% of residential water use is devoted to lawn watering in summer months, when citywide consumption nearly doubles. Pumping and treating that water accounts for about 60% of all power used by city departments. In May 2006, council passed a raft of water conservation policies, including mandatory watering restrictions that took effect in May, designating two days a week when folks can water (odd addresses, Wednesday and Saturday; evens, Thursday and Sunday; apartments and businesses, Tuesday and Friday – all before 10am and after 7pm only). Beginning this Friday, Austinites can call 311 to report water waste or watering violations. City conservation efforts, which also include fixing 12 million gallons a day in city pipe leakage and providing customer rebates on efficient fixtures, are expected to save 32 million gallons a day and eliminate 19,000 tons per year of CO2 emissions. See www.waterwiseaustin.org for more. – Daniel Mottola 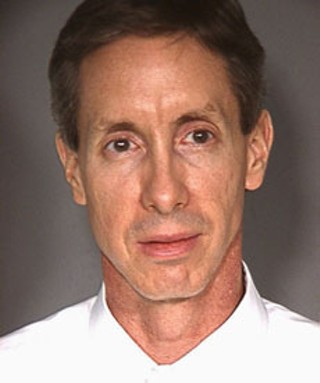 • FLDS MEMBERS IN JAIL Five members of the Funda­ment­al­ist Church of Jesus Christ of Latter-day Saints indicted by a Schleicher Co. grand jury last week have turned themselves in to authorities. Four of the men are each charged with one count of sexual assault of a child, which carries a possible penalty of between five and 99 years or life in prison. The fifth man, Lloyd Hammon Barlow, is charged with three counts of failure to report child abuse, a class B misdemeanor punishable by up to six months in prison. According to The Salt Lake Tribune, Barlow posted bail Tuesday and was released; the others remain behind bars on $100,000 bond. FLDS prophet Warren Jeffs also faces a charge of sexual assault of a child. He has been convicted of rape as accomplice in Utah, for his role in marrying an underage girl to her cousin, and is currently in jail in Arizona awaiting trial on similar charges. The indictments against the six FLDS members grew out of the investigation begun by Texas authorities this spring, which led to the state taking custody of more than 400 children from the FLDS Yearning for Zion compound outside Eldorado. The children were subsequently returned to their parents. – Jordan Smith

• ROUGH PATCH FOR MONKEYWRENCH Six years ago, a handful of activist-oriented UT students, along with the creators of underground activist weekly The Austin Javelina, got their wish for a radical community space in Austin. Through fundraising, donations, and a few investments of personal funds, the group formed a collective and opened up MonkeyWrench Books with only $3,000 to its name. Today, the modest space at 110 E. North Loop has become a nationally recognized DIY community hub, playing host to a variety of free events, including movie screenings, book talks, skill-share workshops, kids' reading groups, and meet-ups for local organizations. The store is completely nonprofit: Book sales pay for the space and more books, while everything else is done through volunteers. "If we had to pay staff, we would never survive," says founding member Cale Layton. Whether it's the floundering economy or just Austinites fleeing the heat, the store is feeling the pinch this summer. To boost funds, they're hosting a book and yard sale on Sunday, Aug. 3, 8am-8pm. For more, see www.monkeywrenchbooks.org. – Sara Robberson

• TEACHER GROUPS BACK DOHERTY Democratic congress­ion­al candidate Larry Joe Doherty, running for the Austin-to-Houston District 10 seat currently occupied by Republican Michael McCaul, received the endorsements of major teachers' unions last week, including the National Education Association, the Texas State Teachers Association, and the American Federation of Teachers. In a press release, Doherty attacked McCaul for voting "to strip $806 billion in vital funding" from the No Child Left Behind program and for voting against federal student-aid programs. At press time, McCaul's office did not return a call from the Chronicle. – Lee Nichols