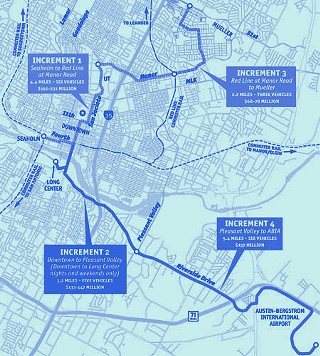 View a larger PDF of the map

At long last, real systems planning for a Central Austin streetcar has arrived at the City Hall station. At the July 24 City Council meeting, consultants ROMA Austin and LTK Engineering unveiled the highlights of a detailed proposal for circulator rail transit. The Phase I analysis includes essential data on: 1) projected ridership and benefits for mobility, environmental, and other regional goals and 2) a route alignment and estimated cost. The broad outlines: Recommended is a 15.3-mile system projected to serve more than 32,000 riders daily by 2030, at an estimated capital cost of $36 million to $40 million per mile, or $550 million to $614 million overall. Electric-powered streetcars would run every 10 minutes from about 6am to 11pm, along tracks in dedicated street lanes (outside of vehicular traffic), with two overlapping lines connecting major central-city destinations. (The ridership estimates assume no transit-oriented development upzoning; in fact, ridership-boosting density increases along Manor Road and Riverside Drive are likely.)

"I was really pleased with the level of detail that staff and the consultant team were able to present Thursday," said Mayor Will Wynn. "The proposal is far more refined than lots of folks had anticipated." Council could act as soon as its next session, Aug. 7, to direct the city manager to move forward on the recommendations.

Under the current political mandate, via the Transit Working Group of the Capital Area Metropolitan Planning Organization: Items 1 and 2 above must be fully vetted before proceeding to: 3) a financing analysis and plan and 4) a voter referendum. Thus, key goals defined in the CAMPO Transportation Investment Decision Tree informed the ROMA recommendations: Connect existing destinations, link jobs and housing, serve low-income and transit-dependent populations, maximize ridership, support and catalyze transit-oriented development, and be cost-effective. Assembling a viable, multipartner financing plan is considered a Phase II project for city staff, Capital Metro, and other potential partners. Only after benefits, ridership, and costs are vetted will a financing plan and voter referendum become politically viable. Yet, due to the financing complexities of engaging multiple regional partners, that research needs to move forward now on its own parallel track.

Notable progress: For the first time, a detailed phasing plan was publicly aired for how to build the system in increments. Each could be submitted separately to voters for approval. (State law appears to allow a public vote on a system expansion of "not more than 12 miles of track" – perhaps an ultimate rationale for short increments – in theory, enabling an election that could be ordered by the Cap Metro board at any time.) ROMA recommended a four-stage construction project, adding vehicles at each stage:

Future Expansion: The core system could be expanded later to serve additional destinations in North, South, East, and West Austin and to connect with expanded regional-rail service.

The estimated capital cost per mile steadily drops (from as much as $53 million down to $29 million per mile) with each successive increment. Brewster McCracken later noted: "Toll roads were coming in with per-mile costs of $70 million-plus back in 2004. The price tag needs to be viewed in a context compared to roads – this is cheaper than roads to construct." He also pointed to ROMA's data that an electrified streetcar would be less expensive to operate than diesel-powered public transportation: "We've long talked about a transportation crisis, but always in the terms of the roads. But as a city, we're now like the airlines – locked in 100% to running on a fuel source that is experiencing massive cost inflation." Overall, the annual operating and maintenance cost estimate for the proposed system is $21 million to $23 million or less.

ROMA emphasized that the Downtown Urban Rail Connections plan – even upon official approval – represents just the first 2% of the necessary system design and planning process. Corridor planning would take the project to 10% completion; preliminary engineering, to 30% completion; final design, to 100% completion. Then it would take another year or two to complete construction and take delivery on vehicles. Questioned by McCracken at council, consultant Tom Matoff, director of Transportation Planning for LTK Engineering Services in California, said the project-cost numbers are highly reliable – in fact conservative, as they are based on a "string of conservative assumptions," including a 30% construction cost contingency.

But City Manager Marc Ott took pains to warn everyone against locking into any cost numbers. "There's a lot to be defined and refined along the way," cautioned Ott. "You don't get numbers you can truly rely on until you get to 60%" completion of planning and design. He specifically referenced the media in warning, "The numbers are going to change; we're very early in this process."

A risk now is that City Council may get mired in early-stage planning. "That's the perennial struggle for Austin: to stop talking and make hard decisions," observed transit advocate Glenn Gadbois of the Alliance for Public Transportation. "Increment one should be a no-brainer; frankly, we've been talking about this long enough. If we sit around and wait to get the finances perfect, it keeps it stuck at the council decision-making level. We'll never get it done. Let's go forward and let staff and the Transit Working Group do their stuff."

ROMA's presentation included three recommended next steps (already blessed by Ott) that require council direction to staff: 1) Seek further public input, 2) work with Capital Metro to prepare a submittal to the Transit Working Group, and 3) present that submittal to council for final approval, prior to going forward to CAMPO. But will council members – particularly newbies Randi Shade and Laura Morrison – be ready to take action at their next session?

"Above all, we need to proceed with a sense of urgency," said McCracken. "The rise in gas prices is hurting Central Texans' family budgets. The modern electric-powered rail system, operating in a dedicated lane that ROMA recommended, will save Austinites time and money, and it will improve air quality."

Streetcar System: At a Glance

See the complete report at the Downtown page of the city of Austin website: www.cityofaustin.org/downtown/downloads/dap_rail_brief_072408.pdf.

Streetcar: The Work Plan
The wheels are in motion for an urban rail system

New Rail Plan Rolled Out
The latest line on streetcars