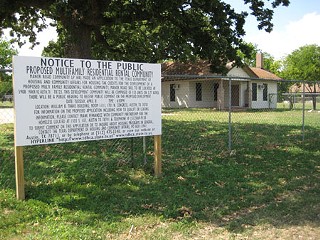 Site of the proposed housing development on Manor Road.

The Northeast Austin Business and Community Alliance, a group said to represent 11 Northeast neighborhood associations and 10 nearby businesses, held a press conference Monday to request that council postpone its decision on rezoning 5908 Manor Rd. in Windsor Park. The Community Partnership for the Homeless has proposed the property be rezoned from higher-density single-family homes to Mixed Use, to allow for a 110-unit affordable supportive-housing complex. The zoning issue is scheduled to go before council today (Thursday).

Paul Saldaña, a former council aide and public relations professional (Adelánte Solutions) hired to represent the alliance, said they want the decision postponed until after July 31, when the Texas Department of Housing and Community Affairs will decide whether to grant Community Partnership tax credits to fund the project. The alliance also challenged the city to adopt a policy ensuring low-income housing projects are distributed "equitably" throughout Austin, rather than concentrated east of I-35.

"Our vision [for the parcel] in our neighborhood plan, which has yet to be a year old, was at the very highest, single-family homes with commercial properties on the roadside," said alliance member Scooter Cheatham. "We're trying to build a neighborhood and to recover from a downward spiral in business." Speakers at the press conference, held at the site (currently a private park), said they believe the project will attract crime and negatively affect the quality of life in the area.

The project is opposed by neighboring landowners and would require a supermajority council vote (at least six of seven) to override the neighbors' petition against it.

According to the opponents, Council Member Mike Martinez has indicated he will vote against the project. Community Partnership for the Homeless hopes to postpone the zoning issue no later than City Council's Aug. 7 meeting to ensure the project will be able to secure funding.