TCEQ will decide proposal to dump treated effluent in creek

Tweet
print
write a letter
A contested case hearing between representatives of a Hays County subdivision and stakeholder opponents, including the city of Austin, ended on Friday after a week of testimony before two administrative law judges. At issue is a proposal by the Belterra subdivision to discharge up to roughly 350,000 gallons of treated effluent into Bear Creek, which ultimately feeds Barton Springs. Prior to the hearing, four other parties – the Barton Springs/Edwards Aquifer Conservation District, the Hays Trinity Groundwater Conser­vation District, the city of Dripping Springs, and the Lower Colorado River Authority – reached a settlement agreement with the developer. The city of Austin, Hays County, and downstream landowners compose the protesting parties.

Their case rests on two paragraphs of the Texas Administrative Code, which state that significant surface-water degradation can only occur when it is necessary to promote social and economic development. Despite the state-of-the-art treatment plant that the applicants propose, the opponents relied on computer modeling by the city of Austin and expert testimony – most importantly from environmental engineer Lial Tischler who, said Stuart Henry, a lawyer for the landowners, "pretty well said anything they try to do ... will degrade the existing high quality of water on Bear Creek." Chris Herrington, a senior programming analyst with the city of Austin, explained the computer modeling he ran, which indicated the proposed discharge would increase nutrient levels in the creek, leading to algae blooms, then an increase in dissolved oxygen, and ultimately, Henry said, "the Barton Springs salamander will likely be harmed."

David Frederick, an attorney representing Hays County, assessed the opposition: "I think the applicants tried a good case. I just think it's like playing cards: If you don't have good cards ... you still, in the end, normally can't prevail." Frederick contended that the essential data was in their favor: "There's no way around the fact that there's going to be a lot more nutrients dumped in this creek if there is a wastewater plant as opposed to if there's not a wastewater plant. And you can't make that fact go away."

Both sides will submit their final written arguments Sept. 8. The judges will read over them and by October should recommend a course of action – denying the permit, allowing it, or allowing it with certain stipulations – to the Texas Commission on Environmental Quality. The TCEQ is expected to decide the case by the end of the year. 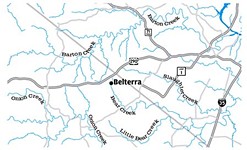