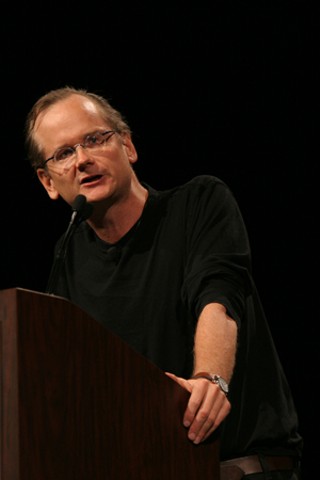 The Netroots Nation convention, held last weekend at the Austin Convention Center, gathered politicians, liberal bloggers, and online activists. It also made clear the political links and disagreements between the 2,000 progressives in attendance and the Democratic Party that hopes these online activists will aid it in the November campaign.

While the event was independent, several big-name guests came from the Democratic Party's upper ranks. Democratic National Committee Chair Howard Dean, in his Thursday night opening keynote address, praised the netroots for helping build the paradigm-busting campaign infrastructure that now makes possible his 50-state campaign strategy. On Saturday, U.S. House Speaker Nancy Pelosi, who rejected delivering a speech in favor of a two-hour Q&A, was upstaged by her own surprise guest: former Vice President Al Gore. The other surprise appearance was Libertarian Party presidential candidate Bob Barr, gathering a cluster of bemused onlookers when he held an impromptu press gaggle later that day.

The general tone of discussion focused on how to get progressive Democrats into office in November – and more to the point, keep them progressive. Some, like Texas U.S. Senate hopeful Rep. Rick Noriega and Texas state Senate contender Joe Jaworski, held special panels to meet the bloggers. Others, like Glenn Nye, running in Virginia's 2nd Congressional District, simply worked the convention floor to build name awareness. 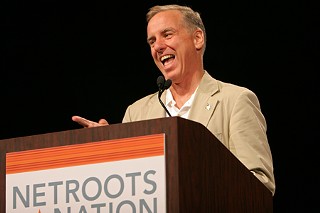 The Dems didn't get a free ride – speakers and panelists savaged Congress for failing to derail, or even slow, the grander priorities of the Bush administration, especially the war in Iraq. The greatest criticism was reserved for Pelosi's appearance. While her presence was generally well received, there was some dissension from the floor over its format. Audience questions had been submitted online and ranked by attendees in advance, via AskTheSpeaker.org. Yet some were angry that, while Pelosi was asked about the Foreign Intelligence Surveillance Act and the Iraq war, the moderators (primarily Netroots Nation Executive Director Gina Cooper) did not hold her feet to the fire. Netroots Nation board member Adam Bonin rejected this complaint, commenting later, "It's not our job to enact a ritual bloodletting here."

A cause célèbre with the netroots, former Alabama Gov. Don Siegelman spoke Friday about the ongoing political prosecution that has cost him nine months in jail and more than $2 million in legal fees. A longtime political enemy of Karl Rove, Democrat Siegelman was convicted in 2006 of dubious bribery charges by U.S. attorneys connected with Rove and the Republican apparatus. Since then, more than 50 state attorneys general have called for an investigation into his case, currently on appeal. Learn more at www.donsiegelman.org. – Wells Dunbar (Photo by John Anderson)

In his closing address, Green for All Pres­ident Van Jones sent the online progressive community home with a clear message not to lose focus. Comparing the task of unraveling the impact of 50 years of a conservative agenda to "cleaning a barn with a straw," he warned them that an Obama victory in November would be the beginning, not the end, of that ongoing battle against reactionary ideologues. He told them, "There are dragons on the right ... that will make us miss John McCain." 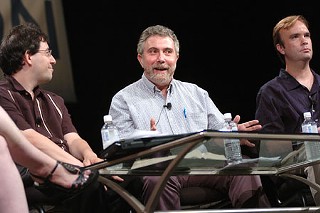 Starting with coverage of the 1968 Democratic Convention riots in Chicago, “the media felt guilty for being ‘too liberal,’ despite being anything but,” posited Nixonland author Rick Perlstein (l) at the panel How the Media Learned to Bend Over Backward to Please the Right.New York Times editorialist Paul Krugman (middle)spoke of the pressure he’s felt to balance his criticism of Bush with columns criticizing Democrats, while Duncan Black (r) (www.eschatonblog.com) spoke of the blogosphere’s power to push back. – W.D. (Photo by John Anderson)