One Quadrillion ... and Then Some 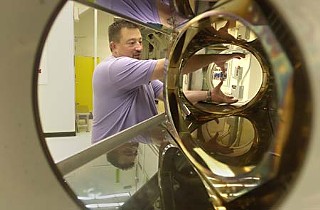 Todd Ditmire at work in the lab. (Photo by John Anderson)

An early spring morning in Austin, still reminiscent of the cool rains of February but with just a hint of the warming, dreadful, soon-to-be-ungodly summer days to come.

South by Southwest had come and gone, and 60,000 University of Texas students had returned to reclaim their city from that festival's weeklong parade of international hipsters. All over campus, they went about their morning business: riding buses, texting on their cell phones, moving through classrooms, libraries, and coffee shops.

Little did any of them know – little could any of them know – what was about to rumble beneath their feet on that crisp morning. Who could be aware of the enormity of what was about to transpire in the bowels of the Robert Lee Moore Hall at the corner of Dean Keeton and Speedway, home of university subdepartments with vaguely sinister names: the Fusion Research Center, the Center for Nonlinear Dynamics, the Center for Complex Quantum Systems, and the infinitely cryptic (and possibly irreligious) Center for Relativity?

Who would have thought that on that day and on that corner and in that basement, history would be made? Important history. Frightening history. History as large as the universe.

On that cool morning in March, with the world going about its quiet, insignificant business, the single biggest explosion of light and heat and energy the universe had seen since its birth was about to take place.

Few knew of it.

No one could stop it.

Professor Todd Ditmire is in the dirty business of making high-peak-power light pulses. Very high-peak-power. As the director of UT-Austin's High Intensity Laser Science Group, Ditmire is in charge of the most powerful laser in the world, a machine capable of producing a petawatt of energy. That's one quadrillion watts – for those keeping tabs, 1,000,000,000,000,000. To provide a little perspective, the power output of the entire U.S. electrical grid is about half a trillion watts. The petawatt laser residing in the basement of the RLM building produces 2,000 times that amount.

Here's another way to think about it: Light intensity is a measurement of power per unit of area. Sunlight on the surface of the Earth can produce about a watt of power per square centimeter. The petawatt laser, meanwhile, produces light intensity 20 orders of magnitude brighter than that. Imagine a magnifying glass half the size of Texas focusing all the sunlight hitting the Earth on a spot a tenth of the size of a human hair.

So, on March 31 Ditmire and his team of graduate students and professors and other mad geniuses brought all that power to bear on unsuspecting humanity for one brief moment, a moment that created more energy than courses through the mighty United States ... and more heat than resides at the center of the sun.

Time Is on Our Side

Adela Ben-Yakar hunches over her microscalpel. (Photo by John Anderson)

Surely death and destruction and global ruin were soon to follow.

Maybe not. It was not a giant stream of light like in the movies – say, Independence Day or War of the Worlds – shooting through walls, destroying national landmarks, and generally wreaking havoc on helpless citizens or invading hordes in a wild streak of neon blue. The petawatt laser, despite being the most powerful laser in the world (or rather because of it), is only capable of producing its light and energy in extremely shorts bursts. Cosmically, insanely short bursts. Shortness that's nearly impossible for us to wrap our heads around.

Power, you see, is energy per unit of time. The more temporally concentrated a burst of energy is, the more powerful it is. So in order to create a petawatt of energy, Ditmire and his team had to both squash their light beam down to a very narrow point and produce it for a very short amount of time. These "pulses" only last for a matter of femtoseconds.

A femtosecond is one-millionth of a nanosecond. In analogical terms, a femtosecond is to one minute as a minute is to the age of the universe ... give or take a few abstractions and intellectual leaps of faith.

Besides, Ditmire and his fellow high-intensity laser scientists aren't interested in destruction or domination or even defense. Their petawatt laser is a means of understanding the universe. By bouncing the light through an intricate series of mirrors, optics, gratings, and amplifiers, they're able to create what is essentially the world's largest magnifying glass, focusing light to peak intensities and generating enough heat to simulate exotic astrophysical states that – up until this point – they've only been able to speculate about: What happens to matter at the center of the sun? What is the true nature of a brown dwarf? Is it possible to create matter from nothing? Can we return it if it doesn't fit?

In other words, they are creating a mock-up of the universe in a lab ... in Austin ... approximately five blocks east of the Slices & Ices pizza stand.

One burst of radiation at a time.

Meanwhile, on the other side of Dean Keeton, development proceeds on a different kind of futuristic laser technology. On the seventh floor of the Engineering Teaching Center, in the heart of the Department of Mechanical Engineering, in a dark lab filled with eager young men, their faces wan from long days and months spent behind protective black curtains, assistant professor Adela Ben-Yakar is building the world's first flexible laser microscalpel. Like Ditmire's petawatt laser, Ben-Yakar's scalpel uses high-energy light pulses that burst for mere femtoseconds. Unlike Ditmire's petawatt laser, however, Ben-Yakar's scalpel doesn't stretch out for hundreds of feet in different directions. It is just a simple black box about 2 inches by 1 inch by 1 inch: a tiny miracle filled with mirrors, optics, amplifiers, and lenses, each barely half a millimeter thick.

Let's say an oncologist is operating on a patient diagnosed with brain cancer. As things stand now, a successful operation will end with the removal of any and all tumors. After these tumors are removed, however, there will most likely still be cancer cells among the healthy material in the brain that surgeons won't want to touch because they're too small to work on and too difficult to find, to get to them would require the removal and destruction of too much healthy matter, resulting in further damage to the brain and thus severe, even deadly, consequences.

Using high-peak energy in short bursts of extremely high heat, with a laser beam that can focus to less than half a micron (or 0.00004 inches), this microscalpel will allow surgeons to ionize – or vaporize – cancer cells with unprecedented accuracy and without damaging surrounding healthy tissue. One surgeon has taken to calling Ben-Yakar's innovation the "vacuum cleaner."

Looking inside Ben-Yakar's microscalpel is like observing Ditmire's mighty petawatt project in miniature: just as impressive but not nearly as imposing. Narrow, low-divergence light pulses, channeled through exotic new photonic crystal fibers with air-guiding holes, bounce off two mirrors, then focus through one lens before rediffusing through another, followed by a trip between two more mirrors before finally refocusing for their trip out of the scalpel and into living tissue. Meanwhile, another light provides visibility inside the tiny, dark caverns of the endoscopic minefield of the human body, while a camera sends images back through the scalpel, providing surgeons with the ability to see, onscreen, that which they had never seen – much less operated on – before.

Yes, it's an endoscopic laser microscalpel, a light source, and an imaging camera all in one! A multiuse, high-powered medical miracle! A miniature revelation of modern science!

And, like the supercharged petawatt laser currently shaking the foundations of our fair city, a glimpse into an uncertain future in the wilds of Central Texas!

Let's pray they don't wind up in the wrong hands ...