Bringing the Net to Austin

How Netroots Nation selected Austin for its meet-up for bloggers

Tweet
print
write a letter
Last week we previewed the Netroots Nation convention taking place this weekend at the Austin Convention Center. See "Building the Netroots Nation," July 11, for more. Here's more background on the event in Austin, and a chat with one of the event's featured panelists. For a full schedule and information on all the participants, see www.netrootsnation.org.

When Netroots Nation was looking for a site for its 2008 convention, Austin quickly made the top of the list. As political director Josh Orton explained, "The local progressive community reached out to us as much as we reached out to them." For Texas progressives, it's about more than bragging rights.

The process began with last year's YearlyKos convention. Fran Vincent, executive director of Democracy for Texas, explained, "We were all up in Chicago last August, and we really got to thinking about how we'd really like the Central Texas progressive community to get more attention." Back in Austin, the group put together a formal pitch to host the 2008 event. Meanwhile, local bloggers got involved. "It was a lot of e-mails and calling friends," said Matt Glazer, editor of Burnt Orange Report. "We wrote about it on national sites, touting the strength of the Texas online community."

What does that community hope to get from the event? Partly, to break the myth that modern Texas remains solidly Republican. At the Legislature, with three Senate and 12 House seats considered in play, and only five seats needed to take back the House, this is an opportunity for wider exposure for Texas Democrats. Vince Leibowitz, author of the Tyler-based Capitol Annex blog, hopes people will realize there are progressives beyond Austin. "I'm looking forward to the candidate's panel," he said. "This is about letting the national netroots know that we've not just got [U.S. Senate candidate] Rick Noriega; we've got a really deep bench."

"The fact that it's coming so soon after the state convention is great," said Glazer, who hopes the convention will maintain campaign momentum over the summer. It may also allow for course corrections before November. "Now the presidential primary is over, we can change the emphasis," said Vincent. "The area that [Noriega]'s going to have to step it up, and we're going to have to step up for him, is raising money."

Glazer admits that there's an ulterior motive for getting the blogging community to Austin. So what's he looking forward to? "Seeing my friends again," he said. "With the exception of Netroots Nation and Take Back America, we really don't get to see these people much. It's an opportunity to meet these folks and find out what's going on in Montana and Virginia and the swing states." 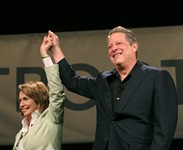 Point Austin: Reading the Roots
They came, they saw, they blogged