Coal mines are mucking up the environment, from the Appalachian mountains to the outskirts of Austin 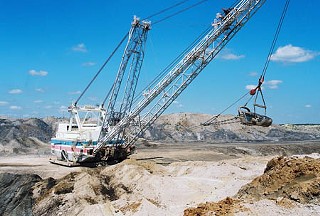 A coal-scooping machine, known as a "dragline," at the Three Oaks Mine near Elgin (Photo courtesy of Luminant)

Like a night terror, the horrible crash and scrape of a 110-ton bucket used to carve coal from the Earth jolts Billie Woods out of her slumber as it hits the ground. "Mining happens 24 hours a day here, and I can never sleep with my windows open," she said. When strip mining began in 2004 about a mile from her home, set in an idyllic scene of rolling pastures and thick clumps of post oaks, Woods said: "I'd wake up and walk into the kitchen to find everything coated in a fine dust. I'm worried about its effect on my lungs." Woods spoke at a June screening of the documentary Burning the Future: Coal in America, which chronicles the plight of West Virginians defending their countryside against the severe pollution and destruction caused by mountaintop removal, a new norm in coal mining. One speaker asked the crowd how far Austin is from the nearest strip mine. "One hundred miles?" some guessed. "Two hundred miles?"

Wrong. Try less than 25 miles to the east. Just outside Elgin, residents like Woods who live near Luminant's Three Oaks Mine deal with a seldom-mentioned cost of cheap coal-generated energy: strip mining.

Fifty-one percent of U.S. electricity comes from coal, an energy source that's exacerbating smog and climate change more than any other. There are 11 new coal-burning power plants proposed for Texas alone, adding to the 36 already operating. Discussions of coal tend to focus either on controlling emissions or on purported energy security benefits while overlooking the direct impacts of mining. Over 4.6 million acres of land were permitted for strip mining and mountaintop removal operations last year, responsible for clear-cutting and blasting apart thousands of acres a year, often severely contaminating groundwater in the process. The Appalachians have historically borne the brunt of U.S. coal mining, though much of Western coal comes from equally intensive strip mining in Wyoming. But there are 14 active strip mines in Texas, all producing lignite, a low-grade coal that emits nearly twice the greenhouse gases, smog, and mercury pollution of higher density coals.

Despite the increasingly urgent need to halt climate change as well as clean up the air, why are we still mining and burning Texas lignite? "One of coal-fired generation's primary values is meeting the short-term need for energy in a cost-effective way," said Thomas Kleckner, a spokesman for Luminant, the mining and power-generation spin-off of Dallas-based utility TXU. Luminant owns the Three Oaks Mine and eight other mines in Texas, as well as nine coal power plants and three more under construction. Meeting Texas' energy needs "will require a diversified energy portfolio – nuclear, wind, natural gas, and coal – along with efficiency, conservation, and environmental measures," Kleckner said. Luminant is also Texas' No. 1 wind power purchaser, he added, and the company plans to buy more energy from wind and other renewable sources, including solar.

Luminant and other utilities continue mining and burning lignite not only because it's cheap and readily available, but because they can afford to keep pumping out unlimited and unregulated CO2. Federal legislation that would cap emissions and create a market for emission credits, thereby "taxing" polluters, isn't expected to get a vote until next year. Though TXU agreed to cancel eight of 11 proposed coal plants last year as part of a private equity buyout, Luminant's remaining proposed plants, the mammoth two-unit Oak Grove plant in Riesel (near Waco) and Rockdale's Sandow 5, would both burn lignite. 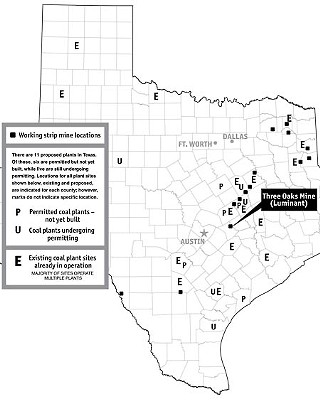 There are 11 proposed plants in Texas. Of those, six are permitted but not yet built, while five are still undergoing permitting. Locations for all plant sites shown on the map, existing and proposed, are indicated for each county; however, marks do not indicate specific location.

Retired Austin Firefighter Russell Bostic lives on land his family has owned since 1901, about 1.5 miles from current mining activity at Three Oaks. His picturesque farmhouse can be seen from the county road atop a hill, flanked by thick patches of oaks. In 1974, Bostic's father leased the property's mineral rights to ConocoPhillips. It wasn't until the Nineties that Bostic learned the lease could be renewed indefinitely every 25 years at the discretion of the lease holder, now Luminant. He knows he may one day lose the land to mining and doubts Luminant's claims that land reclamation efforts "restore the land to a more productive condition than before it was mined." He recalls asking a mine representative, "What about the 200-year-old oak trees?" The rep replied, "They'll grow back in 200 years."

Billie Woods, who says she and her husband plan to leave the area, calls the reclamation efforts a joke. "This is post oak savannah – it's what gives the area its ecological uniqueness," she said. "All they can do is plant grasses and contour the land into little ponds." At best, it'll be just a savannah when they're done, she said.

The destruction wrought in Central Texas, however, barely compares to what's happening in Appalachia. According to the documentary Burning the Future, because of mining, more than 1,000 miles of streams have been buried by as much as 600 feet of exploded mountaintop, called "overburden." At current rates, 1.4 million acres of forest will have been leveled and mined in Appalachia by 2012 – forest that ranks as the world's second most biodiverse behind the tropical rain forest, according to the film.

Following the screening, a panel of Austin environmentalists offered alternatives to continuing to rely on coal. Public Citizen's Tom "Smitty" Smith emphasized the urgency of energy-efficiency programs, such as creating city policy for efficiency upgrades at apartments and rental properties. "If we don't get busy, the city and other utilities will have no other alternative than more coal or nukes," he said. Cyrus Reed, conservation director for the Lone Star Chapter Sierra Club, said that in addition to approving new power lines to West Texas wind farms, the state should strengthen its successful law requiring utilities to meet a percentage of new electricity demand with energy efficiency. Austin Energy was able to save 700 megawatts of energy over 20 years (between 1982 and 2007) through efficiency and conservation, avoiding the need for a planned coal plant.

Panelist Travis Brown lives outside Elgin and in 1998 helped found the group Neighbors for Neighbors to fight Three Oaks. "I can hardly think of a more dirty, destructive, and useless process than to continue mining and burning lignite," he said. Brown's day job involves handling renewable energy development for the state's Office of Rural Community Affairs. "People all over the state ask me why we can't do more of what Austin does," he said. "It doesn't matter where you are politically, efficiency just makes sense economically."

For a list of Austin Energy's efficiency incentive programs, see www.austinenergy.com. For more on the film, visit www.burningthefuture.org.

A West Virginia University study, published in the April issue of the American Journal of Public Health, found that as coal production increases, health status worsens among residents of coal-producing communities. Residents face a 70% increased risk of developing kidney disease, a 64% greater risk of cardiopulmonary disease such as emphysema, and were 30% more likely to report high blood pressure, according to the study. Adverse health effects may be "a result of slurry holdings that leach toxins into drinking water and air pollution effects of coal mining and washing," the study reported. Nearly 140 ponds of toxic byproduct sludge called "slurry impoundments" dot West Virginia. When coal is washed using strong chemicals to encourage cleaner burning, the leftover slurry contains heavy metals like arsenic, mercury, and cadmium, as well as the chemicals. Slurry impoundments have historically been prone to leakage and rupture. In making the documentary, Burning the Future, the film crew visited Marsh Fork Elementary School, situated just 400 yards downslope of a 2.8 billion gallon slurry impoundment.