Will 'Safe-P' and TDCJ Be Held Accountable? A SAFPF day of reckoning may be at hand.

In response to a May 23 Chronicle report – "Rehabilitation or Torture?" – that recounted inmate stories of abusive treatment in a substance-abuse program operated by the Texas Department of Criminal Justice, a legislative committee is planning hearings to review the program. According to Larance Coleman, speaking on behalf of Sen. John Whitmire, Criminal Justice Committee chair, the CJC will hold hearings on the Substance Abuse Felony Punishment Facilities (also known as SAFPF or "Safe-P"), operated by the Chicago-based Gateway Foundation under a contract worth, according to TDCJ, $38 million over five years. "We will concentrate on Safe-P programming," Coleman said of the hearings, tentatively scheduled for September, to evaluate the $234 million the Legislature appropriated last session for TDCJ rehabilitation programs. The state proposes to increase SAFPF funding by $63.1 million during 2008-09, although Gateway may not be the only vendor considered. The exact dates of the hearings will be announced two to three weeks in advance on www.senate.state.tx.us.

In January, then-inmate Jodi Stodder-Caldwell persuaded others at the TDJC's Ellen Halbert Unit in Burnet County to record their SAFPF experiences in letters submitted to Austin lawyer Derek Howard, who's considering legal action. According to numerous inmate narratives from Halbert and other units, the SAFPF program – in theory a substance-abuse treatment alternative to hard prison time – instead relies heavily on dubious forms of psychological and physical abuse. Several inmates describe a group punishment known as "tighthouse," during which inmates are forced to sit upright in plastic chairs, unmoving and silent, for as long as 16 hours a day and for weeks to months on end – a "mind-crushing" form of cruelty that has resulted in mental breakdowns and suicide attempts. The accounts also report that SAFPF inmates must routinely attack each other psychologically during an abusive form of "group therapy," while staff bellow that they are worthless.

Moreover, inmates charge that their real medical needs are subject to denial or dismissal; Gateway's response is that medical care is the responsibility of the TDCJ, not the contractor. Staff are said to dismiss untreated medical conditions, some as severe as epilepsy or cancer, with taunts or advice to "drink more water." [Former] inmate Tracey Atherton, in a narrative dated May 23, describes the callous manner in which "the guards talk about inmates who are sick. ... I heard one of the guards say: 'That fucking bitch is having a seizure.' Everything that Jodi Stodder stated is true."

There are dissenting voices, however. Shirley Otto, a SAFPF inmate in 1995 and currently a Gateway counselor working at the Hackberry Unit in Gatesville, wrote that after living on the streets, she learned "to live again" through SAFPF. She described tighthouse as "a timeout for grown-ups," with breaks for "chow" and therapy, and she accused complaining inmates of not wanting recovery. "They are looking for an easier, softer way," Otto wrote. "Somehow, some way, they missed the blessing of SAFP."

Judging from official responses thus far, the inmates may indeed find it difficult to convince the Legislature that the abuses they have chronicled are real. When the Office of Inspector General sent investigators to Halbert to interview inmates, Stodder-Caldwell told the Chronicle, investigators seemed receptive at first but turned increasingly "rude." Officially, the OIG investigation remains open, but asked in May about the results of his review, Inspector General John Moriarty said that the alleged abuses had in fact not occurred. Gateway President and CEO Michael Darcy called the inmates' descriptions of tighthouse "bizarre" and untrue, and declined to respond to the Chronicle story.

According to more recent inmate accounts, Halbert staff are aware of the public controversy but unafraid of retribution. "We were told if the lawsuit happens, what or who would give 'dope fiends like us' help?" wrote Brenda Carroll on June 5. Carroll says that she'd been forced to wet herself because an "expeditor" (a ranking inmate in the SAFPF "therapy" program) had denied her request to go to the restroom. "I was also forced to sit in the box [a solitary chair] ... for not being aware of my 'need.'" (I.G. Moriarty expressly rejected allegations that inmates are deprived of bathroom breaks.)

The SAFPF "therapy" model is based upon a practice known as "therapeutic communities," which had its origins in a Sixties-era California drug-abuse program called Synanon. Critics and proponents alike date the peer-based TC methods to the "attack therapy" popularized by Charles Dederich in the Santa Monica-based Synanon, which eventually degenerated into a brutal and murderous cult, as reported in a 1979 Pulitzer Prize-winning exposé in the Point Reyes Light by then-publisher Dave Mitchell. "It's unfortunate that Synanon became the model for therapeutic communities; basically a large portion of drug treatment is based on a cult," Mitchell said in an interview. Synanon was eventually shut down by the authorities, in part because in addition to abuse of patients, staff were assaulting defectors from the program and threatening detractors with death.

Available for committee testimony should be survivors of other disgraced programs that operate on the therapeutic communities model. Some said they would testify just how closely the SAFPF accounts resonate with their own victimization in TCs incubated at Synanon. "The women [in SAFPF] have charged they must often sit silently, rigidly, face-forward, in plastic chairs for long hours or days, occasionally through periods of weeks on end. This was true of Straight, Inc. as well," wrote Shelby Earnshaw, director of a survivor support group, the International Survivors Action Committee (www.isaccorp.org) in an e-mail. Tony Connelly, now in his 30s, told the Chronicle that he still hears in his mind the sound of kids being abused at another Synanon-style TC facility, Kids Helping Kids, where he was a patient/inmate from the age of 14 to 16. Connelly says children were required to sit for hours on donated church pews – sometimes held down by "peers" and their noses pinched so they couldn't breathe. Connelly recalled, "The sitting, the rigid posture, the staring at the wall, the limited showers and restroom breaks are all familiar to me. The forced confessions, the demeaning attacks ... requiring inmates to report infractions of other inmates or face punishment are all too vivid to me." Connelly added that the authorities count on the public dismissing such complaints because they come from addicts or former addicts.

"All therapeutic communities have their origins in Synanon," acknowledged Austin criminologist Martin La Barbera. But after Synanon's demise, La Barbera says, professionals revived and refined a good idea – peer therapy – into modern-day TCs. In the 1990s, Gov. Ann Richards appointed La Barbera to the committee that would incorporate the TC model into her prison reform initiatives. This was the "Golden Age," he said, when Texas set the standard for the nation. "All beds were to be treatment beds," was Richards' directive, La Barbera says. At the same time, however, the name "Substance Abuse Felony Punishment" was coined, possibly to indicate rehabilitation would still involve retributive justice. "But I do not believe that 'punishment' was ever Gov. Richards' goal," La Barbera contends.*

When Richards left office, the Texas Department of Criminal Justice absorbed all rehab duties and dispensed with La Barbera's services. Still a consultant to prison systems elsewhere, La Barbera contends that despite its origins, the TC model has saved lives and spared many people considerable pain and suffering. "I don't want the baby to be thrown out with the bathwater," he argues. "TCs are powerful. As with anything that is powerful, the power can be directed for good or misdirected."

If he were to testify, La Barbera says he would urge the Legislature to insure that all SAFPFs meet "fidelity" – a strict set of guidelines insuring TC practitioners have the "right attitude" above all else. He would also recommend intensive "immersion" training, in which authorities and staff experience what inmates will experience. "If you don't meet fidelity ... then it's a crapshoot," La Barbera says.

For her part, Stodder-Caldwell sees no redeeming qualities to the TC model. "It is a program of contradictions, where it is almost impossible to do the right thing. 'Attack therapy' is only a form of psychological violence and abuse," Stodder-Caldwell said. She says she will urge legislators to divert the millions sent to Gateway – which provides only "counseling," as the state picks up the tab for housing, food, clothing, and GED education – to pay for vocational and computer training instead. "These opportunities are not provided in SAFPF. Therefore, in reality a person leaves in much the same situation as they came in – broke and unemployable," Stodder-Caldwell says.

The Legislature is not likely to hear public testimony from SAFPF staff who fear retribution. In an e-mail, one respondent to the Chronicle article wrote, "I love my job there and feel I am one of the few people who work there who 'give the offenders a voice.' ... But if Gateway claims that the inmates are (and were) in chairs for only four hours a day, that is a lie. ... What are your plans at this point to hold Gateway accountable?"

That will be the challenge for the Criminal Justice Committee.

*[The original version of this story mistakenly attributed the coining of the name "Substance Abuse Felony Punishment" to the Texas Department of Criminal Justice when it was in fact coined during Gov. Richards' administration. The Chronicle regrets the error.] 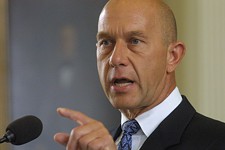