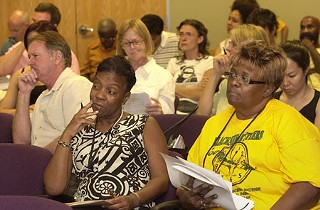 Neighbors and business owners turned out Monday for a meeting to consider zoning changes in the area along East 11th Street. See "ARA All Up in the Victory's Grill" for details. (Photo by John Anderson)

• Teachers' unions are suing Austin Independent School District to block the release of what they argue are incomplete and potentially damaging criminal background-check reports. Texas chapter of the American Federation of Teachers and the Texas State Teachers Association joined Education Austin in a suit filed July 10 to prevent the public release of any such data that could identify individual teachers. On June 13, Attorney General Greg Abbott issued a ruling that, under the Texas Public Information Act, AISD would have to release the complete and unverified raw data. This would include all of an employee's run-ins with the law, no matter how old, including misdemeanors and dropped charges. Arguing this would only stigmatize perfectly qualified staff, TSTA President Donna New Haschke said, "We can protect students in our public schools without lynching school employees." – Richard Whittaker

• With Downtown's Movies in the Park series kicking off with Clueless this Saturday in Republic Square, you may be feeling a little clueless yourself about why part of the park is fenced off. The fencing, which is temporary, is allowing some much-needed TLC for the park's three large, historic Auction Oaks – under whose shade Edwin Waller auctioned off the very first lots of our newly laid-out city in 1839. The Austin Parks Foundation project includes pruning, feeding, and root-zone restoration for the venerable, stressed-out trees. Next, APF will build a 3,500-square-foot deck and seat wall surrounding the trees, to further protect their root system, and transplant (within the park) four other trees now crowding the Auction Oaks. The park's hill-like berms are also slated for removal, using a tree-friendly "air spade." Meanwhile, Movies in the Park will carry on: July 24, and Aug. 7, 9, 17, and 30. Movies start shortly before dusk, so arrive by 8:45pm – or earlier, to get a good spot for your lawn chairs and picnic. Enjoy the ice cream and hot dogs, and try the premovie gaming fun provided by sponsor Nintendo DS. No booze. For more info, visit www.austinparks.org/moviesinthepark.html. – Katherine Gregor 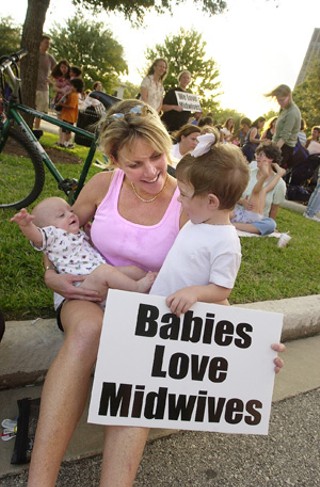 A 2003 rally at the Capitol (Photo by John Anderson)

• A bundle of joy arrived this week with the announcement that St. David's North Austin Medical Center will open its doors to nurse midwives, who six years ago were summarily booted out of Seton and the city-owned Brackenridge Hospital. Since then, midwives and their advocates have lobbied local hospitals to give midwives delivery privileges. "We're thrilled that we're finally seeing this policy in Austin," said Amy Chamberlain, a board member of Texans for Midwifery-Austin, a consumer advocacy group. She credits Dr. Christina Sebestyen, an ob-gyn at the North Austin facility, for nudging the ball forward. Sebestyen actively promotes more collaboration between doctors and midwives. In 2002, two private physician groups, claiming economic setbacks, yanked their sponsorships of midwifery programs at Seton and Brackenridge, leaving midwives – and their patients – in the lurch. The two hospitals' policies currently remain unchanged, Chamberlain said. For now, though, midwife advocates are satisfied they've made inroads at St. David's north location. "We're savoring this moment," Chamberlain said. – Amy Smith

• Dust off your résumés: Gov. Rick Perry is looking for a new communications director. Longtime Perry aide Robert Black announced on July 14 that he will be standing down from the post. In a press release, Perry praised Black's "real talent for effectively communicating my long-term vision for Texas." Black has been a fixture in Republican politics since serving as a legislative aide for Rep. (now speaker) Tom Craddick, R-Midland, in 1990. He has also worked for U.S. Rep. Dick Armey, R-Texas, future White House press secretary Ari Fleischer, and Attorney General Greg Abbott. Since 2003 he has held several posts for Perry. He raised some eyebrows in August 2007 over how his job blurred the lines between governance and campaigning when he said, "As press secretary, I am the governor's chief spokesperson for both state and political issues." Black isn't leaving politics completely: He plans to open a private communications strategy firm in September. No successor has been named. – R.W.

• The city of Austin has decided to file complaints in municipal court against a subcontractor responsible for the destruction of 143 mature oak trees in Oak Hill in May. Gillingwater Excavation, working on an apartment project for lead contractor Cadence McShane Corp., razed the trees in an area that was not part of the site plan. Cadence McShane reported the incident to city arborist Michael Embesi, who then issued a stop-work order that lasted for a couple of weeks. Pat Murphy, environmental officer with the city's Watershed Protection Development Review department, said that 20 complaints were filed, 17 for destruction of legally protected size trees (greater than 19 inches in diameter). Calls to Gillingwater were not returned as of press time. – Lee Nichols