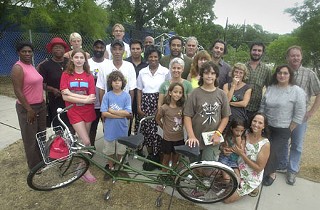 V for Vanishing Landmark? Neighbors of the Victory Grill, the East 11th Street landmark and cultural touchstone, are speaking out about an Austin Revitalization Authority proposal to increase building height limits and density in the area, including the block where the Victory stands. While the area already boasts a special designation that grants generous concessions to builders to encourage economic growth, the ARA’s proposal to build higher and denser office and living space on vacant 11th Street lots could cut off side-street access to the Victory and threatens to cast a large shadow over the modest, one-story gathering space. Area neighborhood associations, as well as Victory management and surrounding merchants (representatives of all three groups are pictured here), have voiced reservations and opposition to some details of the plan. The ARA presents its proposal to the Urban Renewal Board on Monday, July 14, at 6pm in Room 400-A of the Street-Jones Building, 1000 E. 11th. (Photo by John Anderson)

• Talk about a bad Monday: Austin Police Department Officer Daniel Eveleth had a real stinker this week. The 11-year veteran was out at the Circle C Ranch Metro Park around 5am working with a police dog when, somehow, he lost his Glock pistol. To make matters worse, Eveleth didn't even notice the gun was missing until officers showed up at his home several hours later, gun in hand – the pistol had been found sitting on a playground slide by a mother who had taken her baby to the park. An investigation into the incident is ongoing. – Jordan Smith

• While City Council is at rest this month, the Planning Commission tackled the rather thorny issue of the Oak Hill Neighborhood Plan on Tuesday night. One major milestone in the discussion was a decision to designate the area at the "Y" – the intersection of highways 290 and 71 – as a "major planned development" under the neighborhood plan's future land-use map. It's the theory of neighbors and commissioners that such a decision will give neighborhood associations more input into any future development of a master plan, although just how much input is still in doubt. At least one major landowner has announced plans for a massive town center project, sparking concerns about traffic congestion and potential environmental impact (the site is in the Barton Springs Watershed). Other landowners in the area, meanwhile, are still silent on their views of the city proposal. – Kimberly Reeves

• The Paramount Theatre is going green, and the owners hope it serves as an example that any building can be ecologically friendly. The former vaudeville and variety house, now a state landmark that's listed in the National Register of Historic Places, is undergoing energy-efficiency renovations. "If a historic theatre can find ways to go green, just about anyone can," said Ken Stein, executive director of the Austin Theatre Alliance, the nonprofit organization that runs the Paramount. To maintain the look of the 93-year-old theatre, the existing light fixtures have been relamped with energy-efficient bulbs to cut energy consumption; just switching out the perpetually lit exit signs will save 7 million kilowatt hours per year. The renovations are being paid for by donations from groups including the Austin Convention & Visitors Bureau, the Austin Community Foundation, and private citizens. The next stage is to raise funds for a new heat-reflecting polymer membrane roof. Donations can be made at www.austintheatre.org. – Richard Whittaker

• The Hays Co. Commissioners Court on June 27 voted against a settlement with the developers of the Belterra subdivision, forcing a contested case hearing at the state level the week of July 14. The developers are seeking to dispose of treated effluent in Bear Creek – which flows into Barton Springs. Several stakeholders – the Lower Colorado River Authority, Dripping Springs, Barton Springs/Edwards Aquifer Conservation District, Hays Trinity Groundwater Conservation District, the city of Austin, and landowners immediately downstream from the development – had tentatively agreed to a settlement that would greatly limit the amount of effluent and conditions under which it could be disposed. It's estimated that discharge would occur 20 times a year under such conditions. Some of the players who signed off on the agreement say they did so to avoid a possibly worse scenario playing out at the state level. Because the settlement was not unanimous, the city of Austin will also be a party with Hays Co. in the case. Following the hearing, an administrative law judge will issue a recommendation to the Texas Commission on Environmental Quality, whose commissioners will ultimately decide the case. – Jacob Cottingham

• "KVUE is my home and will continue to be for a long time to come," anchor Christine Haas said last November, when rumors circulated she was heading to WFAA, KVUE's sister station in Dallas-Fort Worth. Seven months later, Haas is bidding adios to KVUE, leaving her Austin home to take a morning-news slot with KHOU in Houston, which is also owned by Belo Corp. "It was an opportunity I could not pass up," Haas said Tuesday. The move to Houston, the country's 10th largest market, is a logical step up the TV news ladder for Haas, who has the blond news-maiden looks coveted in larger markets. She also appeared more articulate and quicker on her feet than the rest of Austin's newsreaders, marking her for quick promotion to the big leagues. Haas arrived in Austin five years ago from Minneapolis to replace stalwart Judy Maggio on KVUE's top-rated newscasts. With Haas in the female anchor seat, the ratings barely missed a beat, even when Maggio and another KVUE veteran, Ron Oliveira, reunited at KEYE. At KHOU she will be able to report as well as anchor a morning show that is "a serious news program," Haas said. "It is not a light and fluffy morning show." Her last day in Austin hasn't been determined, but it will likely be near the end of July. "I do love Austin," Haas said. "It's a place that I will never forget." – Kevin Brass

• Austinite and longtime George W. Bush confidant Karen Hughes has been named a global vice chair for New York-based PR giant Burson-Marsteller. Hughes served in Bush's gubernatorial and presidential administrations. According to a press release, she's the second former presidential aide to join the firm in the last year. Don Baer, a White House communications director for President Bill Clinton, joined the firm last November. Hughes will be based in Austin. – K.R.