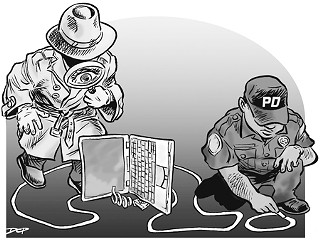 When are the techs that fix broken PCs not techs? When they're unlicensed private eyes. That's the fallout from new rules about private investigators that have inadvertently swept up computer-repair professionals. The owners of three small IT firms from around the state, including local firm Austin PC Tech, are suing the board and board members of the Texas Private Security Bureau, the state agency responsible for regulating private investigators. In the suit, filed in Travis Co. District Court on June 26, lawyers from the Institute for Justice say new rules handed down by the board mean that anyone fixing a computer without a private investigator's license commits a class A misdemeanor, with a year in jail and a $4,000 fine both for the tech and for the customer.

The problem is Section 1702.104 of the Texas Occupations Code, which deals with private investigators. The section was altered in the last legislative session by House Bill 2833, authored by House Law Enforcement Committee Chair Joe Driver, R-Garland. In October 2007, the Private Security Bureau, which is responsible for turning the law into enforceable rules, handed down an opinion. "Computer repair or support services," the bureau wrote, "should be aware that if they offer to perform investigative services, such as assisting a customer with solving a computer-related crime, they must be licensed as investigators." But institute attorney Matt Miller argues that "investigative" is too broad and nebulous a term. To properly fix a computer means finding the source of the problem and that, Miller contends, is where the law says everyone has to be a licensed PI or risk breaking the law every time they fix a computer.

Mike Rife has been in computer repair for 20 years and opened Austin PC Tech in 2002. He was unaware of the law until the institute contacted him a month ago and showed him the rules. "Their interpretation and mine as well is that we're violating this law," he said. Now he's a plaintiff in the suit, and while he doesn't think legislators meant to cripple the computer-repair industry, he does think that is what the rules do. "A big part of our business is finding out what happened, why it happened, and how to prevent it happening again, so many times it takes analyzing what is considered data that is not available to the public," he said.

But Driver said this was never meant to penalize computer-repair firms, just to clarify the law. According to a statement of legislative intent issued by his office, the change "addressed industry concerns" (the investigation industry, not computer-repair techs) over whether investigating computer crime required a PI license. Miller argues that investigation-industry bodies, such as the Texas Association of Licensed Investi­gat­ors and Associated Security Services and Investigators of the State of Texas, were the ones pushing the new rules through the Legislature. During its passage through Driver's committee, no testimony was heard from the computer industry. "There's a big disappointment that greater effort wasn't made to reach out," said Rife.

This means any computer-repair firm now needs one manager or owner holding a class A investigations company license, which requires a three-year apprenticeship with a licensed firm or a bachelor's degree in criminal justice, plus a criminal background check and a passing grade on a 200-question exam. For big companies, that's a major inconvenience. But for small firms like Rife's, it could be the difference between staying open and shutting down. Especially, Rife said, since the only investigating he does is finding out who or what broke the machine. "A mother asking about which child infected their computer with a virus, that seems perfectly reasonable and should be legal," he said.

Institute lawyers want the court to rule that the law violates the Texas Constitution because it violates due process and overextends the policing powers of the state. They also argue that, by barring techs from explaining to people why their computers are broken, the rules violate free-speech protections. Miller puts the blame on the shoulders of Driver and the investigation industry for pushing a fatally flawed law about technology that they didn't really understand. Calling it "a grab for market share" by lobbyists, Miller said: "There is no need for this. There are laws against computer fraud and computer crime. There wasn't an existing problem that they were trying to deal with." Who's Taking Who?
The inside game of the 'property rights' legislation reveals the usual suspects