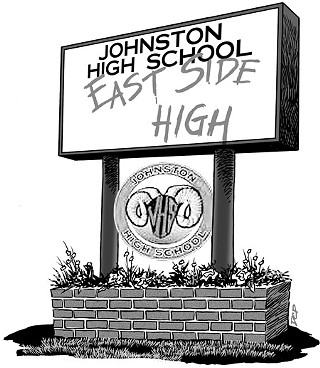 The death of Johnston High School was a painful, five-year process. But the birth of its replacement, the yet-unnamed Eastside high, will be much faster. "On Monday, August 25, when school starts, we will in effect be opening our newest school," said Austin Independent School District spokesman Andy Welch.

After being classified "academically unacceptable" by the Texas Education Agency for five consecutive years, there was disappointment but little surprise when the ailing Johnston's closure was announced on June 4. AISD Superintendent Pat Forgione had already promised that, closure or not, it would not be "business as usual" at Johnston next academic year. Now he's pushing forward with "repurposing" the East Austin campus. While AISD hopes change will be quick, this is the start of a two-year process. The ultimate goal is that the campus will house three schools: the international high school, which already shared the site with Johnston and continues unaffected, and two new schools, one to open this year and a second in fall 2009. The precise plans are not yet finalized nor approved by the TEA, but in his June 18 letter approving repurposing, TEA Commissioner Robert Scott highlighted two options submitted by the district, an "Early College" and a "New Tech" high school, as "innovative programs that could meet the needs of the East Austin community and attract students from across the district."

This August, incoming students entering grades nine through 12 will be part of phase one of the plan. The emphasis will be on what AISD calls Small Learning Communities, in which teachers, parents, and support staff work in concert with one goal: preparing students for college or employment. Jumpstart (beginning July 21) and intervention schemes will push students to graduate on time, as will one program that was a successful Johnston innovation: the Twilight School, giving evening supplemental instruction for students held back twice in their high school career. "It will serve a lot of kids better than if they were attending a more monolithic high school," said Welch.

But Scott has not given the district a free hand. There will be strict state oversight and a series of sweeping changes, including an overhaul of staff and students. The aim is to make sure this is not just "Johnston" – with all its attendance and attainment problems – under a different name. Although the school will keep Johnston's attendance zone, students will not be automatically enrolled anywhere. Instead, the 619 students who have put down Johnston as their preference have been sent a letter giving them the right to "opt in," as can any student districtwide attracted by the proposals, with transport provided. Area students that opt out can pick a different school, even one currently under a transfer ban – but the district hopes the new schools will attract and retain kids who transferred or dropped out. "There is a real committed core of folks in the community who want this proposal to succeed," said Welch.

While Austin state Sen. Kirk Watson applauds making this a school of choice for children across the district, he stresses the importance of a major high school in lower East Austin as more than just a matter of local pride. "Some of those kids are in a position where work near where they go to school is very important. It's not just a kid working for extra money to buy more gas; their money is an important component of the income of the household," he said.

Welch stressed public consultation as a priority. AISD plans meetings over the summer and campus tours into the fall, but the first step is selecting a new name for the campus. The old school was named after Confederate Gen. Albert Sydney Johnston; as part of the repurposing, the TEA called for renaming (though the campus may retain Johnston's ram mascot and school colors). The district is taking suggestions that reflect the current Eastside population. "Austin has changed in many ways from the sleepy college town it was 40 years ago, and the community will be involved in this decision," said Welch. Submissions will be accepted until July 20, but Welch admits that some of the new signs will be temporary when the campus reopens, since the board of trustees won't pick a name until Aug. 11 – two weeks before the new semester.

Watson called the renaming "form over substance," and stressed that parents and administrators need to remember the priorities. "It wasn't the name that was the problem," he said. "Changing the educational substance, that's the goal."

What the TEA Is Demanding

TEA Commissioner Robert Scott set a number of conditions in his June 18 letter approving a repurposing of Johnston High.

• Must be districtwide "schools of choice"; no one can be assigned before fall 2010.

• Management team to remain, with approval over program content.

• AISD must abide by and fully implement final submitted plan.