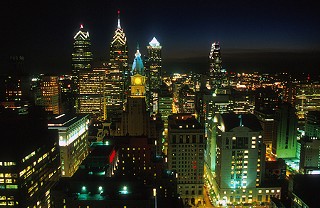 In the sparkling City of Brotherly Love, an outspoken coalition is successfully championing good design and planning. (Photo courtesy of Philadelphia Citypaper)

Austin is finally getting serious about urban planning. Last week at City Council, a fresh comprehensive planning process got the green light. For at least the next two years, we'll be engaged in a great civic conversation about the future of our built city. Yet no single community group in Austin is dedicated to advocating for good urban design. As we approach a rapid series of critical decisions, a number of the community's best and brightest urban-design and -planning minds have begun talking together about how they might better serve as watchdogs for the collective good. As trained professionals, they want better city planning and development decisions based as much as possible on objective design principles rather than political compromises.

Philadelphia's Design Advocacy Group offers an interesting model for Austin. Formed about seven years ago by a core group of six, including Chairman Alan Greenberger, DAG now claims nearly 1,000 members. By championing a "Reform Agenda for Planning and Design in Philadelphia" over several years – and having the good fortune to help elect new Mayor Michael Nutter, who has adopted its agenda as his own – DAG has become an amazingly effective community voice.

The all-volunteer group has no staff, no dues, and no formal organization. States the website (www.designadvocacy.org): "Our goal is be proactive as well as reactive; effective as well as thoughtful; critical as well as constructive. We want to create an unparalleled voice for design, a group whose opinion on the quality of our environment is sought after and whose contribution makes a difference. We are a group drawn from a broad spectrum of disciplines, comprised of motivated individuals who are routinely engaged in matters of design, development and planning and who are not afraid to speak out."

That last point is crucial. Austinites tend toward polite public education and vociferous grumbling in private. What we lack is courageous, informed voices insisting on the recognized principles of good design and planning. (Greenberger enjoys saying, "Advocacy is our middle name.") DAG positions have been taken seriously due to the professional expertise and stature of its 28-member steering committee. Many are notable practicing architects. Others are University of Pennsylvania faculty members, some with the School of Design's "clinical arm," PennPraxis, through which faculty and students work on community projects, such as the website PlanPhilly.com. (What a great idea for the Community and Regional Planning Program at the School of Archi­tec­ture at the University of Texas!) Others are professional planners who serve on city and regional planning commissions. Lay members include lawyers, builders, developers, preservationists, economists, students, and PR and marketing types. All that's required to "join" is to provide an e-mail address.

At DAG's open monthly meetings, "a free and frank exchange of ideas is encouraged." Presentations on hot development projects and controversies draw a good crowd of 50 to 75 members. DAG's advocacy positions are honed after discussion at monthly meetings, a flurry of e-mails among the steering committee members to forge a consensus view, and a formal vote when necessary. To advance the cause, DAG hosts public forums such as "Pride of Place" on the design and planning issues relevant to a particular mayoral election. It has helped lead independent design charrettes for important projects such as Penn's Landing, a major waterfront development. DAG members provide expert testimony before government agencies, write letters to government agencies expressing positions, and publish white papers, op-eds, columns, and letters to the editor. Financial support has come from the William Penn Foundation.

How effective has the volunteer group's advocacy been? An early high-visibility fight was against the Jefferson Parking Garage, an ill-conceived, overscaled, neighborhood-blighting project for which Thomas Jefferson University and Hospital sought zoning variances. While DAG lost the battle for a complete redesign, the publicity put the group on the map. They also lost a battle – despite an emergency letter-writing campaign – to preserve historic buildings sneakily demolished by the state. But their major initiative – a Reform Agenda for Planning and Design in Philadelphia – has been a thrilling success. Within two weeks of taking office, Nutter named new professionals to the Planning Commission (including Green­berger as vice chair), the powerful Zoning Board of Adjustment, and the Zoning Code Commission – just as DAG had advocated. The reform agenda called for creating a new Civic Design Review Commission; the mayor is now pursuing it. After witnessing DAG's by-invitation design reviews of major projects, said Greenberger, "Now the mayor is calling for the Planning Commission to set up a design-review operation based on the DAG model."

Addressing the Philadelphia City Planning Commission last week, Nutter gave a stirring speech – from the mouth of DAG – that, if heard here, would make many Austinites weep with joy. Austin Planning Commissioner Tracy Atkins, who heard Nutter address the 2007 Congress for the New Urbanism conference in Philly, remembers: "He impressed me then. He is young and energetic." Said Nutter: "As a city government, we reject the 'let's make a deal' mentality that dominated the past. Monty Hall has left City Hall. ... Those days are over! ... Planning is not a luxury, nor is it a jargon-filled veneer obscuring a deal-making process that slices up a city's assets in a disorganized rush. ... It's not a passive system, simply responding to developers' proposals; it's proactive and sets high standards of design." (Download the full text here.)

Marveled Greenberger: "We've lost a lot of battles, but we're winning the war of reform. We can't believe it! None of us saw this coming."

"Developing Stories" visited Philadelphia during the June 5-7 Association of Alternative Newsweek­lies Convention. To join a dialogue about starting a local group that advocates for good urban design and planning, e-mail planaustin@yahoo.com.