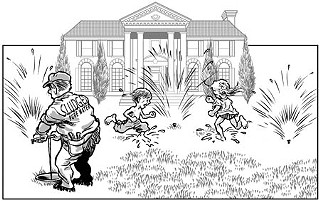 A growing number of Hill Country subdivisions, which disperse hundreds of thousands of gallons of treated effluent through a surface spray system, threaten to destroy the region's environment, critics say, because the landscape can only take so much poop.

Aerated treatment units are, for better or worse, a common method of treating wastewater in back yards instead of collecting the wastewater at a larger collection center. Because such systems require permitting from the Texas Commission on Environ­mental Quality, the public process usually draws the attention of environmental groups. Currently on their radar is the controversial Jeremiah Ventures project in Hays County, which is seeking TCEQ approval to spray treated waste. ATUs use an "activated sludge process," the same method often used on a larger scale at municipal wastewater plants. This method pumps small bubbles of air into a septic holding tank. The swirling air creates a breeding environment for a high number of waste-eating bacteria. The difference between these two scales is that the municipal system is able to regulate a steady flow of water into the system, whereas homes have spikes of water usage – laundry day, for example, or everyone showering in the morning.

David Venhuizen, an Austin engineer who plans and designs wastewater systems for homes, businesses, and developments, says those fluctuation levels "compromise the ability of the system to produce good effluent." The rising and falling levels of waste throw off the delicate equilibrium of the food-microorganism ratio, which can have a wildly unpredictable effect on the quality of the effluent, he says. The same result can occur during a power outage, when the motors pumping the air bubbles stop turning.

While all this is problematic, there is another concern: Almost universally, ATUs are paired with a surface spray irrigation system. Because of the relatively cheap price of installation, home builders often install what is essentially a sprinkler system for treated effluent. The water passes over a chlorine tablet, which is stacked like a Pez dispenser in a cylinder. Eventually the bottom tablet dissolves, and the one above it drops down to take its place. The water passes over the chlorine and is scattered on the lawns of back yards. This chlorinating process is rife with problems, Venhuizen says, pointing to a recent study in Livingston, north of Houston, showing that 85% of these systems were not functioning at their desired capacity.

Some of the problems these surface systems run into are simple – that same study found that 15% of homeowners didn't even bother to use the tablets. Other times, the chlorine tablets swell in their cylinder, preventing the next one from dropping down. Confus­ed homeowners have also been known to use swimming pool chlorine tablets, which are insufficient. When total suspended solids (residue retained in a filter) are high, sometimes fecal coliform bacteria aren't cleaned by the chlorine, thus spraying the yards with what could be micropoop.

Complicating the matter is the fact that last year the Texas Legislature passed House Bill 2482, releasing homeowners from any obligation to have their systems regularly serviced. Although homeowners were paying for maintenance, they often complained that the providers were not actually showing up and that when they did, very little was done to help the unit's performance.

Clay County, in North Texas, began to notice such problems and six months ago enacted a ban on the construction of spray distribution systems. "We were having a 90 percent failure rate of people not maintaining those aerobic units," says Clay County Judge Kenneth Liggett. "We were finding places where it was almost raw sewage being pumped on the ground." Such scenarios are clearly a health concern for neighbors, Liggett said.

Clay Co. official Bill Cameron, a registered sanitarian, has taken the lead in Clay's pioneering measures. He tests about six units a week and rarely finds one that doesn't fail. He tests for a number of things – carbonaceous biochemical oxygen demand, total suspended solids, and fecal count. None of these is monitored by TCEQ, which tests for chlorine residual, which, according to Camer­on, "has nothing to do with the quality of that effluent and zero to do with the safety of that effluent." When the effluent quality is as bad as the results from these studies would indicate, it increases the odds that pathogens will be released into neighborhoods. Clay is a rural county with only 200 such systems and has yet to record any illnesses.

Colin Bishop of Woodville, who heads government relations and business development for the U.S. division of Bord na Móna Environmental Products, says high fecal counts can adversely affect public health and water quality. "People can get sick from ingesting fecal matter," he says, and the same poorly treated water can also seep into the watershed.

Faulty systems could carry serious consequences in Austin-area watersheds. John Dupnik, a planner with the Barton Springs/Edwards Aquifer Conservation District, says that even with practically raw sewage being sprayed, enough soil and vegetative cover can assimilate a lot of that. But, "If there's thin soil, bare rock, or recharge features, there is the potential for the bacterias and pathogens and even nutrients to possibly get into a feature and move on down the aquifer," he said. Such worst-case scenarios could also immediately impact well water, and "it's not outside the realm of probability that that could occur." Cameron estimates that Travis County alone may have as many as 10,000 of the less environmentally friendly spray distribution systems.

Bishop and Venhuizen both advocate using a more natural filtration method for treating the wastewater. Often referred to as "recircu­lating gravel filter systems," Venhuizen calls his variant "high-performance biofiltration." Sand filtration techniques were first used in the mid-1800s. A century later, the University of Florida refined those techniques. By the 1970s, recirculating methods were beginning to enter into the process. Such methods rely on a porous natural or synthetic media filter, which houses the microorganisms that eat the waste. Instead of relying upon bubbles and a precisely oxygenated environment inside the septic tank, old-fashioned gravity pulls the water over filters – which can be fine gravel, geotextile fabric, or peat fiber. The water is pumped over the filter bed where it slowly seeps back into the tank as bacteria munch away at the waste. After several passes, the water is treated. This passive process is more natural, says Bishop, and can even breed some higher life-forms such as worms. While these filtration systems carry a higher price tag, they're known to produce higher quality effluent without needing regular ­maintenance.

Hays Co. Commissioner Karen Ford sees the benefits in Venhuizen's biofiltration system. She had it installed at her new precinct offices in northern Hays County, an area where ATUs proliferate in a host of residential developments – "about every acreage subdivision out there," according to Venhuizen. Ford's system is coupled with an underground drip irrigation system, which both Bishop and Venhuizen say is preferable to surface spray. Rather than unleashing poorly chlorinated water into the air, perforated tubes snake underground, releasing the filtered water into the soil, where it can provide water for vegetation and avoid contact with people. Thus, the effluent is transformed into a resource. Ford says she "wanted to make sure we had a system that could treat our waste in a way we would feel good about." She wants her new system to "set the tone for what I hope will eventually become the standard throughout the Hill Country."