AMD opens the next stage in watching the watershed 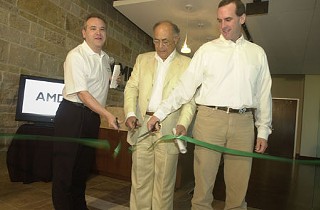 There was a lot of rhetorical high-jumping Monday evening at AMD's grand opening of its new Lone Star Campus on Southwest Parkway. Every few minutes, someone seemed to be "setting the bar higher," beginning with CEO Hector Ruiz, who told me, "This campus raises the bar for the city and state, and we hope we can be a role model for the necessity to do it right." Gail Vittori, co-director of the Center for Maximum Potential Building Systems, who consulted on the project, told the audience it will "raise the [environmental] bar for corporate campuses"; earlier she also praised the company's decision to "set the bar so as not to exceed what they would have spent for conventional buildings," thereby providing an example of what can be efficiently done. City Council Member Mike Martinez commented, "They have set the bar pretty high for commercial development on the aquifer, and this is now a bare minimum standard for what should be done." Mayor Will Wynn followed his inevitable remarks about the inevitability of regional growth by congratulating his hosts on "how high this bar has now been set, for ensuring how little [that growth] will task our environmental resources."

I may have missed a few, but you get the idea: There were more high bars in the air than at the average NCAA track meet. And to judge only from a very cursory walkabout and the available PR materials, AMD and its people have every reason to be proud of what they've accomplished on the Lantana site: reducing the building footprints, relying entirely on native-plant landscaping, capturing rainwater for cooling and irrigation, corralling storm water against excessive runoff, using natural and recycled materials, emphasizing daylight lighting, etc. In sum, all the "green" features may be sufficient to qualify the project for a "gold" rating under the Leadership in Energy and Envi­ron­mental Design rankings of the U.S. Green Building Council, in theory making it "one of the greenest corporate facilities in the world."

Waiting for the Next Footprint

Of course, the first principle of "green building" is site selection, and on that standard, AMD scores rather poorly, having defied broad community sentiment to locate on the contributing zone to the Edwards Aquifer and Barton Springs. Whatever the company's intentions and ecological practice, there is a good chance that the headquarters and its 2,500 employees will generate spin-off development unlikely to approach the same environmental standards. Ruiz thinks otherwise. "If we weren't here, there would be a bunch of 7-Elevens and strip malls and dry cleaners," he told me. "In my view, we saved this tract."

George Cofer, on hand to accept a $700,000 AMD grant to the Hill Country Conservancy – which it plans to leverage with federal matching funds to buy another 2,600 acres of lands and conservation easements in the watershed – pointed out that the nearby Freescale facility had not generated dramatic secondary development since its arrival (as Motorola) 20 years ago. "I do know that we [HCC] couldn't do what we do without partnering with donors like AMD, and I certainly hope that this facility will set an example for continuing development in the area." Council Member Brewster McCracken described the project as "a reflection of where we're going, and why we're working on the [city's] comprehensive plan. The Southwest Parkway is a very high-capacity road, and we badly need to sync up our transportation planning with our land-use planning." He added that much of the land in the immediate area has pretty much exhausted the intensive building possibilities "under [Save Our Springs Ordinance] entitlements. Beyond city limits is another question, so we badly need cross-jurisdiction collaboration."

The masters of jurisdiction-crossing – those folks at the Capitol who made certain that Austin's SOS regulations would have as little effect as possible, in part by grandfathering sites like Lantana – were represented this evening by Gov. Rick Perry, who (in reference to the current condition of his official residence) wryly endorsed one green AMD notion: "I really like the idea of living close to your work." His remarks were largely confined to economic boosterism, congratulating Texas corporations on job creation, and of course, more bar-raising: "Competition is what pushes us to be the best that we can be."

Otherwise, Perry didn't react to Ruiz's brief earlier attempt to put him on the spot, when Ruiz applauded his company's determination to "take seriously the idea of protecting the environment," then turned to Perry and said, "Perhaps no other corporation should be allowed to build anything, unless it's like this." The chances of such regulation troubling Perry's veto pen under the current Lege regime, in which corporate-funded foxes are routinely assigned to guard the environmental henhouse, are about as likely as yours truly winning the Olympic gold medal in high-jumping.

AMD's "campus" is an attractive installation, with thoughtful environmental features, enviable working conditions, and spectacular views of the countryside – the sort of place most Texas college students might attend if the state hadn't ruthlessly neglected higher-education funding. I asked Martinez if he thinks AMD's apparent success in treading lightly at Lantana might put an end to the local controversy over the project and its potential aftereffects.

"Never," he responded quickly. "There's no such thing. This is an ongoing, evolving issue, and we have to apply the same standards, or higher ones, to any continuing development out here. ... It's always a trade-off between the needs of the property owners, their entitlements, and the protection of the environment. I think we struck a good balance; I think we should be proud of it. But we always have to maintain our community values in relation to development ... and make certain that it speaks to these very same values."

All together now: How high can you jump?