Immigration comes calling at the jailhouse According to sheriff's office spokesman Roger Wade, ICE has merely been given access to an office already available to any agency that needs it. The space also doubles, he said, as a "storage closet." (Photo by Jana Birchum)

As part of the ever-expanding effort to enforce U.S. immigration laws, Immigration and Customs Enforcement officials asked the Travis County Sheriff's Office in January for some office space at the county jail. The office complied, as it does in collaborative efforts with all federal, state, and local agencies, and since then, ICE has enjoyed unfettered access to a small office in the jail that is shared with agencies like the Austin Police Department and the Texas Department of Public Safety.

Immigrants' rights advocates say that this increased presence in the jail swings open the door to violations of the right to due process and threatens public safety by undermining trust between law enforcement and the immigrant community. Travis Co. Sheriff Greg Hamilton, on the other hand, has steadfastly downplayed the impact of ICE's presence. His sentiments were echoed last month at a joint meeting between the Austin Human Rights Commission and the Austin Commission on Immigrant Affairs, where Austin Police Chief Art Acevedo reiterated his increasingly familiar refrain: "At APD, the way we conduct business is the status quo. It's business as usual."

Though now ICE does have 24-hour access to a cubbyhole with desk and chair, Capt. Art Cardenas and sheriff's office spokesman Roger Wade have both told the Chronicle that ICE doesn't have enough manpower to be at the jail on a 24/7 basis. There are no official ICE hours of operation at the jail, said Cardenas, but immigration authorities are generally there 8am-5pm, working with the county's security threat unit to investigate and stem gang violence at the jail. Meanwhile, according to Wade, the number of immigration officials working with the county has only risen by two since January, when ICE asked to increase its presence in Travis County.

But despite law enforcement officials' insistence that ICE's presence hasn't changed anything, some indicators suggest otherwise. According to data that defense attorneys Nicole True and Malcolm Greenstein obtained through public records requests, ICE placed 302 detainers on Travis County inmates in February 2008, compared to 41 in February 2007 and 36 in February 2006. ICE officials will place a detainer, or "hold," on an inmate when they want to interview him to figure out his immigration status. The data shows that the first three months of 2008 saw more holds placed on Travis Co. inmates than the entire year of 2006. Meanwhile, there has also been a 13-fold increase in the number of holds placed on county inmates charged with misdemeanors. And even defendants who are ultimately found not guilty must remain in jail until an ICE agent has had a chance to interview them.

Increased enforcement of U.S. immigration laws is not necessarily the issue, opponents say – unless, as True noted in her testimony at the meeting, ICE places holds on inmates who are already permanent residents. She said she has frequently seen cases of legal residents held in jail for days until ICE interviews them. Adrian Ramírez, assistant director of ICE's San Antonio field office, told the Chronicle that "as soon as a person goes to jail, if they are then ID'd as foreign born, they are interviewed as to their immigration status." He said that there is no set time frame for this process but that it typically takes one or two days. ICE holds also take precedence over criminal bonds, which means that even if an inmate can pay the bond to get out of jail, he or she may still have to stay and wait for the ICE interview.

Commissioners on both sides of the meeting relayed concerns from the immigrant community that coming forward after witnessing a crime, or even just getting a speeding ticket, could lead to deportation. While Acevedo pointed out that minor offenses like traffic citations do not require suspects to list their country of origin, Cardenas noted that on Travis County forms, the information for where and when to pay tickets is only available in English. As a result, some non-English speakers don't end up paying in a timely manner, the tickets turn into warrants, and when the defendants are eventually arrested and booked, ICE may then choose to get involved.

Acevedo insisted that APD is not actively pursuing individuals for being undocumented (he also acknowledged, notably, that undocumented immigrants are not involved in criminal activity in any greater number than any other segment of the community), but as Austin Commission on Immigrant Affairs Chairman Tom Esparza pointed out, it's the perception of an increased danger of deportation that is disrupting communication between law enforcement and people in line for permanent residence and citizenship. Cardenas acknowledged that the sheriff's office could take steps to improve relations with the immigrant community. "We are working on a [public service announcement] right now encouraging people to come forward with any details of any crime they may witness or be a victim of," he said. "There is nothing to fear regarding immigration status for people who come forward to report a crime."

"I like the idea of incorporating more cite-and-release offenses for APD," said Immigrant Affairs Commissioner Ramey Ko, "as well as changing and improving citation forms to include other languages so that the non-English speakers know when and where to pay their fines." She added: "As a human rights issue, it's an essential right we all have to be able to live with a sense of security and safety. Folks who are undocumented are a part of this community, and if they witness a crime or are victimized, we need to make sure that these folks are comfortable enough with law enforcement to come forward." Human Rights Commissioner Tom Davis summed up his feelings more bluntly, saying he'd suggest all Austin residents stay as far away from ICE as possible. Both commissions are expected to draw up their findings from the hearing and deliver a report to the City Council, which could serve as a policy-setting tool for APD. 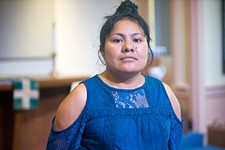 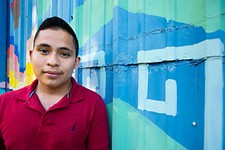 Austin Struggles to Adjust as SB 4 Takes Its Toll on Immigrants
"We are not safer as a community when victims are running away from us rather than coming to us."