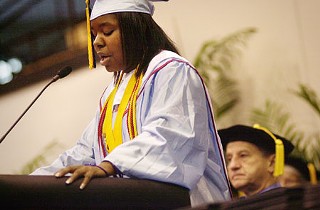 Guevara's speech was typical of those from valedictorians everywhere. She spoke of government teacher Daryl Rupp laboring in his room every afternoon, offering to illustrate that one concept she didn't understand. She talked about her table of friends in the lunchroom and how Project Advance coordinator Carol Winter always stopped by to join their crazy talks that were always filled with laughter. And Guevara spoke lovingly of her immigrant parents from Mexico, whose sacrifices inspired her.

"They say we are an unsuccessful school and we have teachers who don't care," Gue­va­ra told an audience full of parents, friends, siblings, and babies. "I think it would be hard to duplicate the caring and attention of the Johnston faculty and staff, who refused to give up on me."

In her turn at the podium, senior class sponsor Teresa Morgan fought back tears, speaking of her pride in Johnston's seniors. Johnston students were resilient. They were independent. They loved their school and their teachers. They were good kids. "You, as a group, are the reason I come to work every day, especially in the last year," Morgan said. "And I would come back every day for you again." 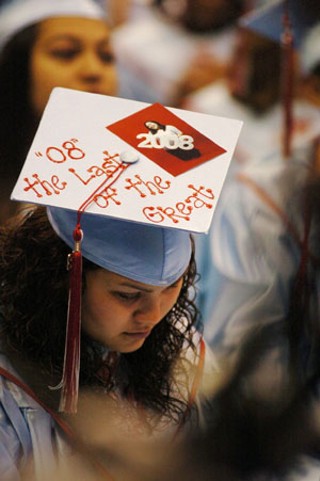 Those comments seemed all the more poignant, knowing this graduation was both the end of the school year and the end of John­ston High. Texas Education Commissioner Robert Scott announced the mandated closure of the Austin high school on Wednesday, June 4, after five years of failing test scores. Though the school again showed some gains on test scores this year, Johnston has been rated "academically unacceptable" by the Texas Education Agency eight of the last nine years, since the school's liberal arts magnet moved up the road to LBJ High, partly because of concerns that neighborhood kids had no chance to end up in the coveted Top 10% that guaranteed entrance to the state's public universities.

This year at Johnston, that Top 10% was 10 students. The school lost a third of its seniors before they crossed the stage to accept their diplomas and shake hands with Trustee Sam Guzman. Only 99 students graduated from Johnston this year, the fewest ever out of the Eastside school.

Talk about Johnston, even in the school's own cafeteria last Thursday night, has focused on the school's challenges: the girls who have babies, the boys who cut class, and the parents who don't bother to get involved. District officials talked about the challenges of educating the "urban student," and how the comprehensive high school model doesn't always fit the needs of the East Austin community. The most important point in the closure, though, may have gotten lost in all the rhetoric. Under the state's accountability system, schools are not closed because the kids fail the schools. Schools are closed because the school district or school fails the kids. Closure is the ultimate "no confidence" vote from the TEA, and this failure sits squarely at the feet of the Austin Independent School District.

But AISD does get another chance. Scott has asked the district to create a plan to reuse the Johnston campus, a plan that could go to the TEA for approval as early as this week. AISD has proposed breaking Johnston up into two small learning communities: One would focus on the vocational aspects of technology, and the other would aim to give students access to free college credit as an early college high school. Over the next school year, the district will meet with parents and the community to craft a more specific plan intended to create new campuses with new names.

"Students, parents, and alumni, join us in this advocacy to create a new vision for the Johnston campus," AISD Superintendent Pat Forgione said. "There will be a bright future for the next generation of students. The Johnston legacy will begin here, and for many years to come, this campus will continue to be a new pride of the Eastside."

Community members appear to be indifferent, at best, to Forgione's promises, with the exception of parents of high school juniors who still want to graduate from the campus. As part of state law, AISD can have no more than half the current students and a quarter of the current teachers on the new campus.

According to a plan presented to trustees, AISD would begin a districtwide recruitment campaign to enroll students in the new campus concepts beginning this month. 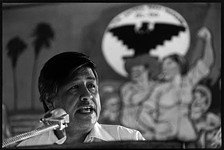 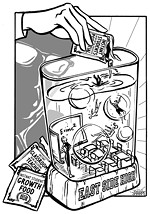