Dems in Austin: Taking the Next Step

The State Convention looks ahead to November 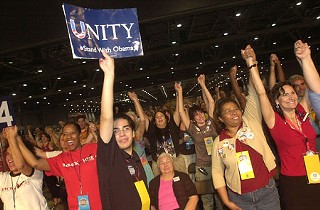 At her first Texas Democratic Party Convention, San Antonio Sen. Leticia Van de Putte told the party's 2008 assembly she had known every delegate by name. This time around, a record 15,000 delegates, alternates, guests, and VIPs crammed into the Austin Convention Center on June 6 and 7. But as big as the event was, it was still sometimes overshadowed by events in Washington, D.C., as the party awaited the final confirmation that Sen. Hillary Clinton would suspend her campaign, making Sen. Barack Obama the party's presidential nominee.

There was still some give-and-take to be done. The final confirmed apportionment of presidential delegates wasn't completed until late Saturday, with the selection of the final three "add-on" honorary superdelegates. But really, the nomination struggle ended Fri­day, with an appearance by Chelsea Clinton. Any fears that her mother's supporters might stage some form of protest were headed off by a five-minute speech from possibly the least-controversial ambassador for the Clinton campaign. She delivered a clear message in two parts. "First," she said, "my mother wanted to make it very clear that we are all going to unite our party and take back the White House in November. And my mom will be making a speech tomorrow supporting Senator Obama."

Her mere presence may have overshadowed the appearance of Obama's campaign co-chair, Gov. Tim Kaine of Virginia, late Friday evening. The presidential nominee's proxy was the first speaker to deliver a large portion of his address in Spanish, to great applause. He had lived for a while in Honduras, he noted, where the highest praise for a leader is to say about them "andando con la gente" – walking with the people. There was great effort to pay reverence to Clinton's candidacy from many speakers, but when Kaine applied that phrase to Obama, and spoke in Spanish about the Illinois senator's commitment to education and his background in community organization, his outreach to heavily pro-Clinton, majority-Hispanic districts was apparent. Kaine was also quick to note the similarities between Virginia and Texas: two states that had traditionally voted Democratic but in recent years had become seemingly impenetrable Republican strongholds – and now once again have a blue tinge.

The recurrent message was that if Obama is to have long electoral coattails, making his administration successful will require a strong down-ballot presence and a lot of straight-ticket voting. Diplomatically calling the still-cooling nomination clash "an intraparty discussion," convention Chair Sen. Kirk Watson put the passion of the primary season down to a desire for change in November. "You're sensing that everyone's coming together," he said. "It is the beginning of the next step, and everyone wants that next step pretty badly."

Watson strikes a Gen. Patton pose at the convention. (Photo by Richard Whittaker)

Much of the discussion was centered on state and local races: The House was highlighted Friday, while the senators got their turn on Saturday. But it was Houston Rep. Rick Noriega, fighting to move from the Texas House to the U.S. Senate, who was the closest thing to a homegrown superstar. Playing down the wildly swinging polls that have put him within margin of error of incumbent Sen. John Cornyn ("They're just a snapshot," Noriega said), he spent much of the weekend speaking to as many caucuses as possible. His sprints from meeting to meeting were often slowed by supporters wanting to have their photo taken with him.

The presidential unity plea, and the loud support for taking back the House, did not mean there was no internal struggle. Party Chair Boyd Richie fended off challenges from his own Vice Chair Roy LaVerne Brooks and failed 2006 attorney general candidate David Van Os. Both ran on the same principle: that Richie's system of targeting certain counties or senate districts had taken too long, and that the party should adopt a 254-county strategy. But Richie won a 63% victory, on the strength of the Dems taking Dallas County in 2006 and, with the party now concentrating effort, assets, and personnel in Harris County, the promise of similar gains again. As former Dallas Mayor Ron Kirk said, with the election less than five months away, the party did not want to switch horses midrace.

By close of business late Saturday, the question had become how to turn convention rhetoric and the current momentum into Novem­ber turnout. Dallas Sen. Royce West had encouraged a literal hand-holding exercise between all delegates on the floor as a very visible and, for some, emotional moment of party unity. Watson was optimistic about how the sheer numbers of people involved in the process can lead to November victories. "That's both good news and bad news," he said. "The idea of organizing that many people is a beautiful thing, but it's also going to put stress on how it gets done and how it gets done right."