This just in: booze and bikes don't mix 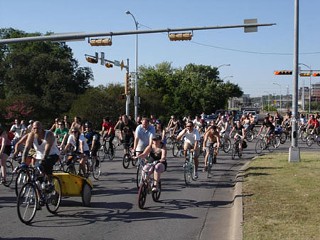 Nearly 100 bicyclists took to the streets last Friday for Critical Mass, a monthly bike ride with a tradition going back to 1993. Longtime cycling advocate Michael Bluejay pedaled a tricycle with a makeshift drum set affixed to its handlebars. Some riders tooted noisemakers to Bluejay's drumming as the swarm of bikes serpentined leisurely through town, while another rider entertained the group with an accordion. At least five participants sported pirate costumes. But, less than a quarter of the group appeared to be wearing helmets – despite data released last week about the dangers of biking without.

The data is part of "Alcohol, Bicycle Hel­mets and Head Injury in Austin," a new study from the University Medical Center at Brackenridge, which looked at 200 trauma patients ages 18 and older from December 2006 through November 2007 and found that cyclists are nearly twice as likely to suffer a brain injury if they are not wearing a helmet and 3.6 times more likely if they've been drinking alcohol or using drugs. While a Brackenridge helmet study has been anticipated since 2005, many were surprised to find boozing and biking now included. Pat Crocker, one of the authors of the study, said researchers decided to look at the helmet question in light of a broader range of factors they saw contributing to crashes, including riding experience, location, weather, and drug and alcohol use. "As expected," reads the study, "helmet use mitigated against brain injury, but alcohol or drug use was a much stronger predictor of head injury."

The doctors who authored the study were also key players in the controversial helmet law proposed, but not passed, in 2005. League of Bicycling Voters President Rob D'Amico called the results "nothing more than a flawed vehicle to try and pass an adult bicycle helmet law, which will do nothing to improve safety for the vast majority of bicyclists."

Few issues have galvanized Austin's cycling advocates more than their opposition to mandatory helmet laws. The LOBV was originally formed to fight the 1996 helmet law and, since regrouping to battle the 2005 version, has become a unified voice on transportation cycling issues. This latest study, says D'Amico, "insults the hardworking bicycle advocates who work tirelessly to make Austin a true bicycle-friendly city with efforts like the Street Smarts Task Force, which did not even discuss helmet use because of its low priority as a means of increasing safety." Many cyclists advocate helmet use but feel a law is unnecessary and excessive in lieu of better education and safer bike infrastructure.

The Brackenridge study is the first of a series, with upcoming publications expected to address the cost of care, demographics, and the impact of helmets on risk of head injury. Crocker noted that current data "has not achieved statistical significance given the small sample size for overall helmet use." The group will continue collecting data for another year.