From Prairie to Settlement to Village

And you thought Webberville was just a spot on the map Robert Long of Austin Energy examines a cistern that some believe was once part of Fort Webber.

Webberville might just be a wide spot on FM 969 in eastern Travis County, but like many such wide spots in Texas, there is a history behind it.

According to The Handbook of Texas (www.tshaonline.org), what is now the Village of Webber­ville evolved from Webber's Prairie, named after early settler John Ferdinand Webber. Born in Ver­mont in the 1780s, Webber was a War of 1812 vet who received a land grant in Stephen F. Austin's colony in 1832. Webber, who was white, pioneered in more than one sense: He married African-Ameri­can slave Silvia Hector (he was not her owner) some time prior to receiving the grant, and after her emancipation in 1834, they made a family together on the prairie. Travis County would not be his final resting place, however – as more settlers moved into the area, the Webbers took heat for their mixed-race marriage and moved on to the Rio Grande Valley in 1853. They took additional heat there for their Union sympathies and spent part of the Civil War in Mexico, but Webber eventually returned to Texas and died near the town of Donna in 1882.

Researcher Bill Kemp and UT anthropology professor Claud Bramblett, acting on tips from locals, went to the top of a hill on the city of Austin's property and found a stack of bricks that appears to be an ancient house foundation. This, along with a large, adjacent water cistern, form what Kemp and Bramblett believe are the remains of Webber's Fort, built around 1832, when Webber and Hector may have been the first non-native settlers in what is now Travis County (see www.webbersprairie.org).

The handbook says Webber's Prairie, also known as Hell's Half Acre, became Webberville in 1853, and the population continued to grow to 382 by 1900, with industry focused around cotton and livestock and two churches, a school, and four general stores serving residents. In 2003, Webberville was incorporated as a village by a narrow 94-87 vote, driven by a desire to control gravel-mining companies in the area and later a composting company – so the locals are old hands at fighting undesirable industrial operations. Hector Gonzales has been Webberville's mayor since incorporation.

On the greener side: Webberville also hosts two beautiful county parks, both with access to the Colorado River, making it a great place to begin a float down to Bastrop or beyond. 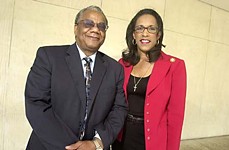