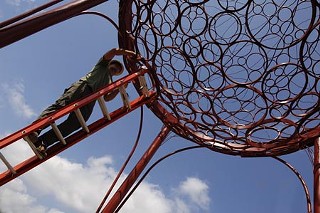 • A final-hour request from East Austin neighborhood groups led the Planning Commission to vote 7-1 on Tuesday to postpone discussion on a low-income development with 110 efficiency units proposed for 5908 Manor Rd. Over the next two weeks, a third party will attempt to mediate discussion between the surrounding neighborhoods and Community Partnership for the Homeless, the nonprofit affordable-housing developer that has requested rezoning of the parcel from higher-density single family residential to Mixed Use, to allow for the proposed project. The developer's plan has prompted outcry from the surrounding neighborhoods, which include Windsor Park, University Hills, and Pecan Springs. East Austin residents have said their part of town already has its fair share of affordable housing and that the project would contribute to the degradation of their neighborhoods. For his part, Frank Fernandez, executive director of Community Partnership, vented frustration when responding to the postponement. "We will give a good-faith effort to the third-party discussions," he said, "but we've made it clear to folks what we're trying to do, and we hope this postponement is not an attempt to kill the project." The Planning Commission will consider the rezoning issue at its meeting on June 10. – Lydia Crafts 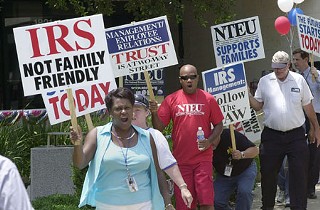 • AISD Superintendent Pat Forgione has another plaudit (beyond managing an almost unprecedented decade as head of an urban school district): a lifetime achievement award from the National Parent Teacher Associ­a­tion. District board of trustees President Mark Williams announced the award, which is the highest honor the PTA bestows, at the board's Tuesday meeting. At the same meeting, new District 3 trustee Christine Brister was sworn in for her first term, and the board re-elected Williams as president and Vincent Torres as vice president. Lori Moya becomes the new board secretary, replacing the outgoing Johna Edwards. – Richard Whittaker

• Talk of moving the Austin Police Department headquarters to Northeast Austin has led to some speculation about what might happen to land that may, some day, become prime Downtown real estate. The headquarters building and its garage are in the Waller Creek tax-increment finance district, which means that any new development would add value to pay off the Waller Creek Tunnel Project. City planner Michael Knox said his best estimates are that the site on which the headquarters sits would probably be limited to nine stories, while the garage site would be limited to three. As for what those stories would house, that remains a question mark. – Kimberly Reeves

• Communicating with loved ones confined in the Travis County Jail may be easier, faster, and cheaper, now that the county has signed on to a new secure mail program run by Dallas-based Securus Technologies. The service allows individuals to register online (www.secureinstantmail.com) and send e-mail – two pages at a time, text only – to inmates confined in the jail. Securus forwards the mail to the facility, and, since inmates don't have direct computer access, jail personnel print out the letters and deliver them to addressee inmates. The cost is 60 cents to send two pages; send a "reply page" with your letter for quick response from inside – inmates handwrite reply letters to be scanned into a computer and delivered to your e-mail inbox. "Friends and family can get their messages to an inmate quicker than sending mail," according to a sheriff's office press release. "They can also get a message back without waiting and hoping that they are there to receive a telephone call that may or may not come." – Jordan Smith

• This was the "horrific" scene that greeted P.J. Maceo and her family as they pulled into the Austin Java parking lot on Barton Springs Road last week, as clearing work on the historic "shady grove" had begun for the incoming Barton Place condos. Another Austinite left a message with the Chronicle saying the scene made him "sick." Developers Constructive Ventures and partner Rick Engel defended the cutting in a statement saying that most of the trees were grafted pecans planted in the early 1900s that were near the end of their lives and had been "regularly dropping limbs." They also said they will preserve 12 of the most viable trees and are moving five across Toomey Road to city parkland. In other tree news, the Chronicle received an alarmed e-mail last week alleging that an approximately 100-year-old live oak on the former Concordia University campus was to be cut down. Developers have told neighbors they are committed to protecting the tree. – Lee Nichols