Can we have it all?

Watching the five idea-rich pitches made last Thursday by the five redevelopment teams wooing City Council to win the Green Water Treatment Plant job, many viewers were excited, even dazzled, by all the public-benefit goodies proposed. Create a "magic" people-place inclusive of everyone? Turn the entire Seaholm East District into a giant solar power plant by cladding the buildings in photovoltaic panels? Cool! Add affordable housing, senior housing, and a subsidized child-care center? Sweet. Create a carbon-neutral model of sustainable development? Wrap the ugly Austin Energy transformers in an arcade sheltering farmers' and artists' markets? Fatten the city budget with $7 million in new annual tax revenues? Sign us up!

With its guiding vision for the project, City Council wisely alerted developers in February that it seeks a project of "unparalleled excellence and high values." The city's request for proposals challenged master developers to creatively compete with one another to propose the most attractive "community values, public facilities, and/or public benefits." Key goals established for the roughly 6-acre redevelopment: first-rate urban design and architecture, public spaces, sustainable/green building, pedestrian/bike/transit connectivity, ample parking, affordable and work-force housing. All of those Austin values – and other intriguing possibilities – are captured in the five proposals from submitting teams.

Unfortunately the public can't see the developers' corresponding financial proposals, which include competing bids to buy the city-owned land – appraised at more than $55 million. To some, excluding citizens from this financial analysis represents a troubling lack of transparency. Why sell off our land at all? To get it on the tax rolls – 40% of the annual millions in tax revenue a successful redevelopment could generate would go to the city's Housing Trust Fund. (Alternately, council could have chosen to keep at least part of the land and build needed affordable housing right on the site.) Worth noting: The city has retained consultantEconomic & Planning Systemsto provide a standardized "net present value analysis" of the financial terms of each proposal – an apples-to-apples comparison. EPS lists two proposers – Catellus and Forest City – as clients; the consultant assured the city it was not on their teams and did not assist in their submittals.

At first blush, each of the developer pitches sound peachy. But in sifting deeper, a clear and critical distinction emerges among the proposers. Only one candidate is a true master developer: Catellus. The city had anticipated receiving more proposals from national master developers than materialized; ideally, the city would have several to select from. (While Ohio-based Forest City has done plenty of land development, the core of its $10 billion business is real estate.) Catellus has earned Austin's trust as the master developer for Mueller, a complex public-private redevelopment unfolding to local and national accolades. Mueller has been held up as a model for Green, because of the deep and successful way it embodies our community values.

The Seaholm District site (which includes both the Green Water Treatment Plant and an adjacent Austin Energy property) is nowhere near as large as Mueller – only about 6 acres to Mueller's 711 acres. But Seaholm East makes up in pivotal significance what it lacks in raw acreage. The finesse with which this site gets developed will affect a huge chunk of Down­town. It's at the hub of so much: the Second Street retail district, soon-to-be redeveloped Seaholm proper, Austin's new central library, Shoal Creek and a potential greenbelt park along it, Lady Bird Lake, a transit and Great Streets corridor, an emerging arts district. For the good of Austin – and precisely because council has identified so many public values and goals for this project – Seaholm East cries out for a master developer, rather than a conventional profit-driven development team.

Here's the key distinction. A project developer negotiates with the city just once, in order to win the job and the land. If it purchases the land outright, a developer's financial motivation to fulfill community values – i.e., spend money on expensive things that benefit all of us – changes the moment the ink is dry on the deal. From that point forward, its primary mission is to deliver a financial return on the project. Its interest is containing costs – which can lead to cutting corners. If the city sells in haste, it may repent at leisure, after it's lost its bargaining leverage. 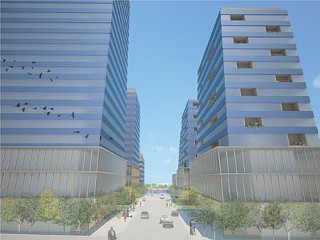 A pure master developer, on the other hand – one not profiting directly from developing individual projects on the site – is in an altogether different role. Catellus said it would partner with the city to ensure that its interests remain aligned with the public interest throughout the redevelopment. (At Mueller, Catellus has continued to raise the bar for affordable housing and sustainable building practices with each phase, beyond its contractual obligation.) Somewhat akin to a general contractor, a master developer first creates a master plan and detailed design guidelines, then invites "vertical developers" and architectural teams to bid competitively on individual projects. That creates a fresh opportunity to negotiate for maximum public benefits on each building and public space. As project goals and conditions evolve over time, Austin retains its leverage and flexibility.

The downside: A master developer must get paid, too. To avoid a financial drag, the burden is on the master developer to create value (and enhanced property values, plus creative financing structures) that fully compensates for its fee. In its pitch, Catellus promised a transparent, open-book fee approach.

A related key financial distinction: Under a public-private partnership agreement (such as the one Catellus proposes), individual parcels are subsequently "flipped" to individual project developers. If the value of the property has increased, which is likely, the city and its residents share in the bounty. That's not true with a one-time sale.

The five Downtown blocks of Seaholm East easily could take seven to 10 years (or more) to fully develop, depending on market conditions. On each block, one or more "vertical developers" and any number of architects could take on individual projects. In fact, the more architectural variety the better; the best solution will have a mix of building types and styles, like a cityscape that's evolved over time. A master developer, under a public-private partnership agreement, would remain Austin's advocate, pushing each project developer to give back more. This approach also would demonstrate greater prudence on the city's part. Commit­ting the entire project now to a single developer-architect team is far riskier. The city could significantly limit the jeopardy of a stalled, delayed, compromised, or bankrupt project by engaging a master developer, staying involved as a partner, and spreading the multiple projects across several developer/architect teams. (This is what's happening at Mueller.) If one developer falters, we haven't put all our eggs in one basket.

(Forest City made unsettling references throughout its presentation to its many large projects nationally that had run in to trouble. In its pitch here, the behemoth company appeared wedded only superficially to its local partners and talked more about itself than about Austin values.)

More risk management: The local architects competing for Green don't have anywhere near the capacity required to execute an entire district on this scale. While architects Cotera+Reed, PageSoutherlandPage, and Black + Vernooy each could do well on one project at a time, none could come close to handling a half-dozen high-rises and public spaces simultaneously. (On the former Concordia University site, PSP – the largest of the three – became overwhelmed recently by multiple projects. That firm's weakness as a master planner – e.g., an unresolved site plan that left too many details unaddressed – also contributed to the long, painful neighborhood battle over Concordia's redevelopment.) Perhaps the overwhelming scope explains the monolithic, uniform architecture shown for the entire district by Cotera+Reed – a look unhappily reminiscent of failed utopian modernism.

Mithun, a Seattle sustainable-design leader (on the Trammell Crow team), would be an exciting match for Austin, but as local team member Perry Lorenz clarified, Mithun was cast only as the master "vision" architect, which is smart. Several proposers said the city's superfast selection process (and the need for a master plan) had prevented working out little details like who would design the actual buildings. 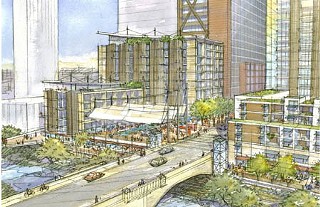 Did we mention a master plan? That critical component still is missing. Critics such as City Council candidate Laura Morrison have called for a community planning charrette for Green. Catellus committed to an inclusive, consensus-based planning process in crafting the master plan. Greg Weaver, who earned respect leading Catellus' initial phase at Mueller, also committed to hands-on leadership for Green. Weaver noted that the company's corporate parent, ProLogis, had embraced innovative sustainable development – a key part of the council vision.

For the Green proposal, Catellus is teamed with HOK Planning Group to create the master plan. (ROMA Design Group, which played this role on Mueller, was not a candidate due to its work on the Downtown Austin Plan.) In presenting to council, Colin Greene of HOK spoke engagingly about optimizing "360 degrees of opportunity" on the site and creating a place that "exudes a memory that's enduring." He laid out four themes for a master site plan: context, connectivity, authenticity, and the public realm. Sketches showed features like a new Second Street bridge over the river coming into a "portal" – "the most spectacular civic moment." It aspired to a public realm with an intense, engaging social life: tree-shaded, comfortable, relaxed, and inclusive.

Interviewed after the presentation, Weaver said the computer-simulated image Catellus showed was "very conceptual." (See it and a slow-to-load virtual tour at www.meetaustingreen.com.) The scheme shows five high-rise towers of 16 to 36 stories over midrise bases. Weaver said the image was offered only to help Austinites envision the site's potential. If selected, the Catellus/HOK team would start from scratch with a full-scale master-planning process – again, to include substantial community input. After finalizing a master plan, they would invite developer-architect teams to bid (competitively) on pieces of the project. Local developers submitting proposals – Constructive Ventures, Andrews Urban, Stratus Properties, Simmons Vedder Partners, Trammell Crow – and other firms each could play an important role. So could proposed team members such as HEB and local building-integrated photovoltaic innovator HelioVolt. Certainly, it would be gracious of the city to invite all proposers to the table, given their expensive investment in generating so many terrific creative ideas for Seaholm East.

That's Austin's best shot at "having it all."

Hurry – the public's window to comment on the five Seaholm East proposals closes Sunday, June 1. Austinites can review the developer presentations on the city's website (www.ci.austin.tx.us/seaholm/green.htm) and find a link to Channel 6 rebroadcasts. Or view the presentation boards on display in the City Hall atrium and media room, then submit comments on the form provided online. Ideas that prove most popular with citizens will be considered for the final project. 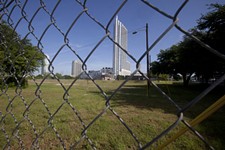 Then There's This: Don't Let the Green Grass Fool You
More questions than answers in GWTP redevelopment proposal Beside the Point: Riptide!
Fast-moving development deal on deck