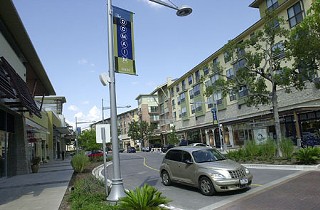 The Domain, the upscale Northwest Austin development known for posh emporiums like Neiman Marcus and Tiffany & Co., is often cast as a paragon of New Urbanist planning. With its retail and residential components situated between two future transit rail lines, it's even been dubbed "Downtown North." But when the city was reviewing initial plans for the Domain's Phase II expansion, staff noticed that bicycle-mobility considerations had been largely left out of the mixed-use development's mix. So in January, the city asked developers Endeavor Real Estate Group and Simon Property Group to include bike lanes, along with a number of other zoning requests, in the project. When plans filed in March still lacked the bike accommodations, cycling advocates and city Bicycle and Pedestrian Program staff cried foul. Since then, representatives for the developers have met with city bike staff as well as members of advocacy group the League of Bicycling Voters in an attempt to remedy the situation.

The meetings got off to a rocky start, with developers initially resisting the city's request that they add bike lanes through the project along Kramer Lane, claiming plans were too far along. This reasoning was curious not only because developers had been asked to adjust their plans back in January but because both Endeavor and Simon are stakeholders in the North Burnet/Gateway Neighborhood Plan, a master-planning document approved by City Council in 2006 that encompasses the entire Domain tract and specifically calls for bikeways along Kramer. "The project engineers were initially clueless as to what bike infrastructure actually was," said League of Bicycling Voters President Rob D'Amico, who left the first meeting feeling frustrated. "Developers represented there would be a bike lane," he said, but then they offered a sidewalk instead.

A second meeting last week between developers and the league proved more fruitful. "The developers knew they had to do something or they were in for a fight and delays," said D'Amico. They tentatively agreed to include more bike parking, drop speed limits throughout the project, and adopt the use of sharrows – street-painted icons, accompanied by signs – indicating that vehicles must share the road with bikes. "It took awhile to go through the process to try and understand the bike folks' priorities. I don't think there was a point where this was a problem," said Steve Drenner, an attorney representing Endeavor and Simon. "The bike folks have been terrific to deal with."

Still, the developers have yet to satisfy the city's requests. Annick Beau­det, manager of the city's Bicycle Program, says the Domain Phase II is subject to the Big Box Ordin­ance and must obtain a conditional-use zoning permit from the city. Beaudet's staff, along with the Watershed Protection Devel­opment Review Department, has specifically recommended 12-foot bike lanes or shared-use paths as one such condition, intended to connect Capital Metro's MetroRail station west of the site to a proposed station on the San Antonio regional rail line to the east. But the developers are resisting. "We can't expand the right-of-way without undoing an innumerable number of things," said Drenner.

"While it's understandable that a rework of any site plan is unattractive to most developers, the need for bike connectivity in this area was established when the city adopted the Bicycle Master Plan in 1998 and was re-established in 2006 in the North Burnet/Gate­way Neighborhood Plan," said Beaudet. "It's part of any developer's due diligence to consider such plans in the very beginning." While Beaudet says she's generally in favor of the agreement between the league and the developers, the deal must still meet the approval of her staff, which is set to review its safety standards in a meeting Thursday, May 22; the Planning Commission will then review the Domain's conditional-use permit application May 27.