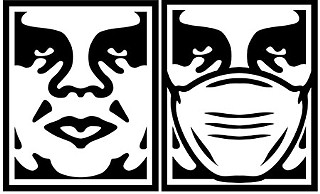 By Shepard Fairey ... by Baxter Orr

Art, like beauty, is in the eye of the beholder. So may be the truth, in a legal squabble over when parody becomes rip-off. From one angle, it's David vs. Goliath, with an independent Austin artist facing legal threats from one of America's most successful graphic designers. From another, it's a battle for intellectual property rights, in which a world-renowned creator says a market-manipulating art dealer is passing himself off as an underdog.

It all comes down to one of the great contemporary visual icons, called Obey Giant. The strange, stylized, brooding image of a face has become a global brand, a 20-year art phenomenon that melds street art, propaganda, and viral marketing. Created by graphic artist Shepard Fairey, the ubiquitous image has been an inspiration for a generation of graffiti, collage, and mash-up artists. One of those influenced was Austin graphic designer Baxter Orr, who did his own take on Fairey's work: a piece called Protect, with the iconic Obey Giant face covered by a SARS (respiratory) mask. He started selling prints, marked as his own work, through his website.

On April 23, Orr received a signed cease-and-desist order from Fairey's attorneys, telling him to pull Protect from sale because they allege it violates Fairey's trademark. Orr calls this hypocrisy. "It's ridiculous for someone who built their empire on appropriating other people's images," he said. "Obey Giant has become like Tide and Coca-Cola."

But Fairey says Orr is the profiteer – not an artist but a mimic and "parasite" speculating in the secondary art market, by which dealers snap up a limited-edition print run of a work to resell at an artificially inflated price. It's not illegal, but it is widely viewed in the art community as unethical. Fairey says Orr, in addition to copying his work, has been guilty of its mercenary exploitation as well. "I want people who are fans of the work to get them," said Fairey, who sells his prints for $25-35 but has found them sold online for hundreds of dollars more. To crimp speculation, Fairey introduced a one print per customer limit. But Orr, he says, has used proxies to buy extra prints, to corner and gouge the market – an allegation Orr rejects.

"Yes, I've made some money out of his artwork," Orr said, "but I wasn't necessarily bulk buying." Orr said that all he was doing was perfectly legally trading in works he bought and owned, although he did say that, before Fairey introduced purchaser limits, he would buy five or six copies of a print in one go. "There's people who buy them and sell them the next day. Most of them, I keep a couple of months."

The issue, Fairey says, is not people riffing on his work. At his website, ObeyGiant.com, Fairey even makes versions of the iconic image available for free, including printing instructions. He says Orr has become notorious among fans and collectors and was banned from one website, TheGiant.org. (Orr says he was singled out for his political views, but site administrators say he was abusive.)

Fairey understands intellectual property law: He's often been on the wrong end of it. In fact, that's how Obey Giant happened. In 1986, Fairey and several friends in Charles­ton, S.C., created a sticker campaign lampooning the ego-driven side of rap and skate culture: a photo of professional wrestler Andre Rene Roussimoff, aka Andre the Giant, carrying the words "Andre the Giant has a Posse, 7'4", 520lb" (because no one was bigger than Andre). However, Titan Sports, owners of World Wrestling Federation Entertainment (now World Wrestling Entertainment Inc.), held rights to Andre's likeness and threatened a lawsuit. So in 1998, Fairey used the basic image of Andre to create the hyperstylized logo. Since then, he's used found images to create other works, and sometimes those images are still in copyright. "I have to deal with the bad end of it sometimes. I've had to pay out," he said. But, he says, the difference between him and Orr is that if he's contacted by a copyright owner, he'll stop using that image.

Orr says that his Protect image is a parody of Obey Giant and therefore perfectly legal. But parody is not an all-encompassing defense. Just because Fairey didn't stop other parodies doesn't mean he has given up his copyright. A trademark has no inherent value, but represents the value of the company or creative force behind it. Fairey trademarked the logo as part of his creative brand and uses it as a virtual signature in posters and publicity materials he does for other people. Fairey says that with legal bills and bad publicity, defending his trademark hurts him and may spotlight Orr. "In a sense, I should have just left him alone," said Fairey. "But this was the only way I could have any recourse for what he had done to others."