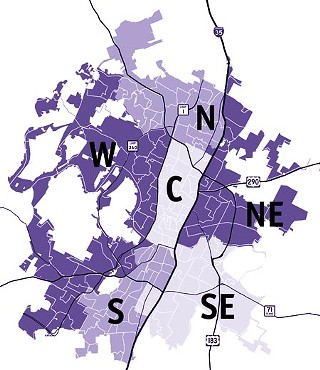 Here's a regional breakdown of the election results, based on the council districts floated during the last round of single-member district mapping.

West has by far the most registered voters – and had the highest turnout percentage. Every candidate but Jason Meeker got more votes in the West than in any other region, but Harrison Keller, Lee Leffingwell, and Randi Shade all got their highest percentage there, as well.

Central is still the liberal stronghold: nearly 70% combined Morrison/Cravey, 60% Mahoney. Central provided way more than half of Morrison's margin of victory over Galindo; that race was a dead heat in the high-turnout West.

• Figures shown in bold indicate the region where each candidate had his or her best showing in percentages or totals.

• ACC results are for Travis County only, and do not include about 3% of the district vote that came from Williamson Co.

Lee Leffingwell won every area of town, beating his nearest competitor by margins ranging from better than 2-to-1, up to almost 4-to-1.

Randi Shade did almost as well, with less regional variation; her totals ranged from 60% to 67%.