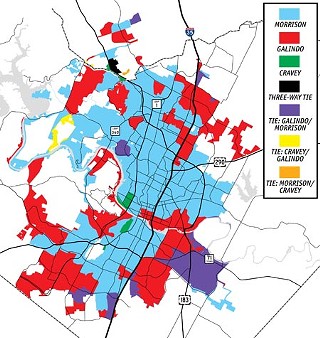 If you're going to lay money on the City Council Place 4 run-off, it appears the safe money would be on Laura Morrison. Her strongest precincts were the ones that usually control Austin elections, the turnout-heavy central boxes – areas where the citizens are most likely to be aware that a run-off is scheduled and engaged enough to get to the polls yet again on June 14.

While it's not unheard of for a regular election second-placer to pull ahead in the run-off (that's what Jennifer Kim did rather handily against Margot Clarke in 2005), there are some election-night numbers that don't bode well for Galindo.

Of the 10 precincts that produced the most votes for Galindo, he actually lost seven and tied one. If he can't even win in the areas with his heaviest support, that likely spells trouble.

What's harder to discern is how the Cravey vote – assuming his voters return to the polls – will break on June 14. Conventional wisdom is that his environment-minded voters will side with Morrison, who garnered most of the enviro endorsements; if that's true, then this is telling: In each of Cravey's top 10 boxes, Morrison got more votes than Galindo.

The Power Boxes (most votes)

Galindo lost most of the power boxes. Of the 10 boxes with the heaviest turnout, Morrison took eight.

*Oops! The following correction ran in the May 23, 2008 issue: In last week's "Place 4 Handicapping: Clouds Over Galindo," the chart titled "The Power Boxes" was incorrect. The names over the results chart read (l-r) Cravey, Galindo, Morrison. In fact, they should have read Galindo, Morrison, Cravey. The Chronicle regrets the error.